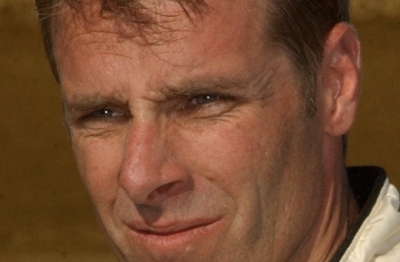 Eric Jacobsen has always wanted to be a top caliber Dirt Late Model racer, but complicating factors — geography, work, family among them — have kept him from fully dedicating himself to thee sport he so much enjoys.

But this season the Seacliff Beach, Calif., resident who maintains a race shop in east Tennessee attributes an ability to focus and better understand what it takes to make Late Models go fast as reasons for increased success.

"I've eliminated some of the things I used to participate in and put more focus on this," Jacobsen declared, pointing to his familiar black No. 5 Bloomquist Race Car. "Everything is based around my work. I have to work first and race second but over time I've learned how to travel better and keep myself rested.

"When you travel as much as I do you've got to pay attention and not burn yourself out. I fly over 100,000 miles a year on United back and forth from home to here."

That extra focus and attention has shown up on the racetrack. In early May, Jacobsen captured his first STARS Volunteer Racing Series victory at high-banked Tazewell (Tenn.) Speedway. And one month later, he added a second-place finish at a Wartburg (Tenn.) Speedway special, and a third-place World of Outlaws Late Model Series finish at Tazewell.

"All the things are coming together right now," Jacobsen said. "It's a group of guys working hard and better understanding what we're doing. The guys I have are working as hard as they can on things like finding more traction."

Jacobsen credits his crew led by Matt Barrett for keeping his cars prepared from a shop in Anderson County while he's away in California working at Soil Fume Inc., which provides fumigants, herbicides and pesticides for the agricultural industry. He also credits his association with chassis builder Scott Bloomquist.

"Scott does have the best car in the business and it shows," Jacobsen said, saying he's had to adjust his driving style after piloting other chassis brands earlier in his career. "You have to drive the Bloomquist cars more off the front end and that has taken some getting used to but it's working out now."

NEEDMORE SPEEDWAY CLOSES GATES: Needmore Speedway in Norman Park Ga, in it second year of operation, has closed for the rest of the season, according to the track website. "To all our fans and race drivers, due to circumstances beyond my control, Needmore Speedway will have to cancel the remainder of the 2011 season," promoter Chris Hunnicutt wrote. "I would like to thank each and everyone of you for your loyal support." Earlier this year, the track was the target of a lawsuit, seeking more than $1 million is damages and lawyers fees, the Moultrie (Ga.) Observer reported. The suit, filed by two couples, said the track has led to traffic congestion, littered yards and impaired drivers on the roadway and claims that the races produce excessive noise. The track hosts its biggest race on May 8 with home-state driver Clint Smith winning a visit by the World of Outlaws Late Model Series. — From staff reports

KENTUCKY DRIVER DIES AFTER RICHMOND RACE: Dirt racer Billy Carroll Wooldridge of Frankfort, Ky., who suffered a heart attack that triggered a heat-race accident July 16 at Richmond (Ky.) Raceway, died two days later at a Lexington hospital, according to his hometown newspaper, The State Journal. He was 61. Wooldridge was a well-known racer throughout central Kentucky who was mostly retired except for competing in Richmond's race honoring his uncle, Paul "Butterball" Wooldridge. At the conclusion of Saturday's second heat race, Wooldridge's car cut across the front straightaway, taking down a portion of infield guardrail before coming to rest in turn two. Track safety crews attended him, administering CPR before he was taken to the University of Kentucky Medical Center in Lexington. See DirtWire for arrangements. — From staff and correspondent reports

NLMS SUSPENDS ROBERTS, TEAM AFTER ALTERCATIONS: The Hedman Husler National Late Model Series has indefinitely suspended Sylvester, Ga., driver Stephen Roberts and all members of the Roberts Racing Team, the series announced July 20. The series cited two separate physical altercations between members of the team and a series official as the reason for the suspension. Roberts, 23, has one victory on the tour this season, which came in an April 16 event at Albany (Ga.) Motor Speedway. — From series reports

UNZICKER PLANS TO RUN ARCA EVENTS ON ILLINOIS DIRT: Dirt racer Ryan Unzicker of El Paso, Ill., plans to team with Hendren Motorsports to compete in a pair of Illinois dirt track events on the ARCA Racing Series later this summer, Unzicker's team reported July 19. Unzicker, the current leader in UMP DIRTcar weekly points, is scheduled to field cars Aug. 21 at the Illinois State Fairgrounds in Springfield and Sept. 5 at the DuQuoin State Fairgrounds. Unzicker ran part time with the Gridley, Ill.-based Hendren team in 2003 and '04 in ARCA and American Speed Association competition before focusing on Dirt Late Model racing starting in 2005. His best ARCA finish came in 2003 at the Springfield Mile, when he finished sixth in a race won by nine-time ARCA champion Frank Kimmel. — From team and staff reports

WEST VIRGINIA TRACK PLANS CRATE RACE TO HONOR MINERS: Princeton (W.Va.) Speedway is planning an Aug. 6 memorial race to honor the fallen miners of last year's Upper Big Branch Mine disaster. The track plans a Fastrak-sanctioned Crate Late Model feature carrying a total purse of $10,000, and is seeking sponsors for the event. Anything over $10,000 will go to plans to build a memorial in honor of the 29 miners. To sponsor the race, call (304) 425-9429 or visit the princetonspeedway.net for more details. — From staff reports