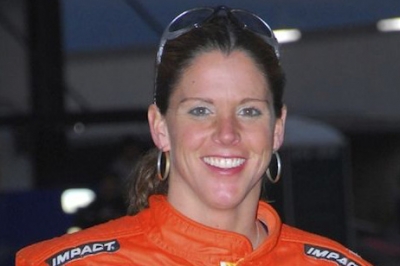 Tuesday's World of Outlaws Late Model Series event at Independence (Iowa) Motor Speedway gives Jill George the rare opportunity to race near home on the series she's followed most of the past two seasons.

George, 32, raced often at Independence in spec-motor dirt Late Model events when she entered the division in 2003 following the end of her successful scholastic athletic career in Iowa. | Rick Hartzell co-promoting Independence event

A graduate of the University of Northern Iowa who now works as a chiropractor when she's not on the road racing with her husband Rick Hartzell and their 4-year-old son Jackson, she's excited to return to the track with the competitive tour on which she's taken her lumps the last two years.

George has been talking about the Outlaws' stop July 12 at Independence with many of her patients, acting as a secondary marketing agent for her husband, who is co-promoting the event with Cam Granger.

"A lot of times during the week when I'm working and adjusting people, they're interested in what I'm doing with the racing but a lot of them have never even seen a race," George said. "Well, with this race at Independence being so close, I've got a lot of people who are wanting to come over and watch. I keep telling them, 'If there's ever a time you want to get over to a race, this is the one to get to. It'll be exciting, and you'll get to see the best of the best in the country out there. This isn't gonna be just like a local Saturday-night race.' "

George knows just how tough the World of Outlaws drivers are. Her career-best finish on the series is 14th — in 2010 at Quebec's Autodrome Drummond and 2011 at Georgia's Swainsboro Raceway — so it's clear racing on the tour has been an extreme challenge.

"I'll have people all the time ask me at my practice, 'Well, how's racing going?' " said George, who does own the best finish ever recorded by a female in a WoO feature. "I say, 'Well, it's good and bad, there's been ups and downs.' Then they ask, 'Well, are you winning?' I kind of laugh and tell them, 'Well, no. We're just glad to be making the races.' They kind of look at you funny when you say that, like they're saying, 'What are you doing out there then?' so I explain to them how hard this and tell them to come over and see for themselves.

"We're definitely not getting great results right now, but I'm doing it to get experience," she continued. "The learning curve of this sport is so extreme, so the reason we decided to run with the best of the best was to try and shorten that learning curve. We've definitely done that, and we're just trying to keep getting seat time and getting better."