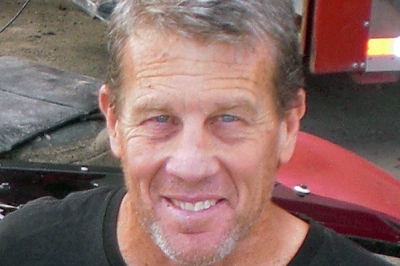 Rick Hartzell has spent the last two years chasing the World of Outlaws Late Model Series all over the country with his wife Jill George, the first female driver to follow the national tour as a regular.

On Tuesday, Hartzell and George will finally get a chance to enter a World of Outlaws event in their backyard, thanks in large part to Hartzell. | Jill George gets rare WoO event near home

Hartzell, 57, is co-promoting the 50-lap, $10,000-to-win World of Outlaws event July 12 at Independence (Iowa) Motor Speedway, a 3/8-mile oval located just 35 minutes from the Hartzell-George homestead in Cedar Falls. The track's first-ever World of Outlaws race will kick off the circuit's four-stop Wild West Tour, which will continue on to Minnesota, North Dakota and Wyoming through July 19.

"It's really simple how this all happened," Hartzell said when asked for the genesis of his partnership with Independence's regular promoter, Cam Granger. "Cam is a friend and both him and I have an interest in keeping open-motor racing going around here, so one day when I saw him this winter I said, 'We ought to have a World of Outlaws race at Independence.' He just said, 'OK Let's do it.' "

Once Hartzell, who owns and wrenches on the No. 22 cars that George campaigns on the series, talked with tour director Tim Christman to secure the date he coveted for a race at Independence, his promotional debut was on.

"I told Tim that we'd love to try to do this, but we want (the race) to be the night before Deer Creek (Speedway)," said Hartzell, referring to the Spring Valley, Minn., track two hours to Independence's north that hosts the Gopher 50 on July 13. "I just thought it would be the right deal and work really well, and that's what Tim worked out with us.

"I'm real excited about this event, and not just because it's good for me and Jill to have a World of Outlaws show close to us for once after all the traveling we do. Independence is a great weekly racetrack. They just go crazy over their racing there, and because of that I think this has a chance to be a really, really good event.

"What I've really hammered on the guys helping do this thing with us is that we do two things: make sure we have a great racetrack, and provide great hospitality to everybody who comes to race with us. We'd like to have an annual World of Outlaws event, so if we do things right maybe we can make that happen."

Hartzell's main role in his joint venture with Granger has been on the marketing and public relations side. He's been working the local-media contacts he made while serving as the athletic director of his hometown's University of Northern Iowa from 1999-2008.

"I've been trying to get the word out about the race by talking to a bunch of my friends in the media," said Hartzell, who today officiates nearly 100 NCAA Division I men's basketball games a season (he's worked as a ref for 28 years). "In my previous job doing the AD work (at Northern Iowa), I was always extra accessible. If the radio, print or TV guys needed me for something, I would get back to them.

"I've used that relationship with the media to call in a few favors here with the race. I'm gonna do some radio interviews this week. Every newspaper in the area is gonna promote the thing for us. We're getting some great attention around here."

Hartzell paused, and then said, "I think if we get a good weather day, this World of Outlaws show has the potential to be a great deal for Independence. It's the only event of its kind this year in the state of Iowa, and some of these Outlaw guys — particularly (current points leader) Rick Eckert and (2006 champion) Tim McCreadie — are hugely popular in the Midwest. People around here are excited to see these Outlaw guys."

Independence's pit and spectator gates are scheduled to open at 3 p.m. for the July 12 program, which includes a $1,000-to-win feature for the IMCA A-Mods. Hot laps are set for 6:30 p.m. and WoO time trials will follow at 7 p.m.

Advance tickets are available by logging on to www.independencemotorspeedway.com.