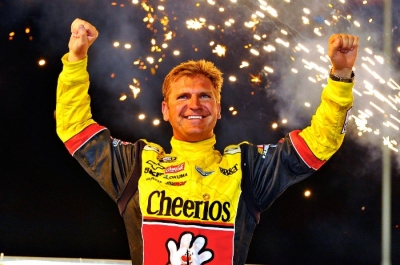 ROSSBURG, Ohio (June 8) – After settling for runner-up finishes in each of the previous two Prelude to the Dream features at Eldora Speedway, Clint Bowyer finally broke through for his first victory in the seventh running of the charity Dirt Late Model race Wednesday night.

Bowyer, a native of Emporia, Kan., who drives the No. 33 Richard Childress Racing Chevrolet in the NASCAR Sprint Cup Series, started from the pole of the 30-lap race and led every lap on his way to winning at the historic half-mile racetrack. | Complete Dream Week XVII coverage

“It’s just so much fun to be able to come here and compete,” said Bowyer, whose victory was broadcast live on HBO Pay-Per-View, with the net proceeds from the telecast supporting four of the nation’s top children’s hospitals. “What an awesome racetrack. I’ve always loved this place and I’m very proud of (track owner) Tony Stewart and everybody behind him that makes this event awesome. There’s a lot of hard work to put on something like this, and we are very lucky to have him put forth the effort.”

Bowyer dominated the majority of the event, pulling to a comfortable lead after the initial start and each of the race’s four restarts. J.J. Yeley ran second the entire distance and closed in on Bowyer late in race. He drove his race car hard into turn three on the final lap, pulling alongside Bowyer. But Yeley couldn’t make the move stick, and Bowyer pulled back ahead for the victory.

Bowyer, whose Clint Bowyer Motorsports fields Late Models for Lucas Oil Late Model Dirt Series regulars Dale McDowell of Chickamauga, Ga., and Jared Landers of Batesville, Ark., finished second to Tony Stewart in the 2009 Prelude and in 2010 he was the runner up to Jimmie Johnson, who was driving one of his race cars.

“It’s about time,” Bowyer said of his victory. “I’ve gotten beat up on pretty bad. Jimmy beat me last year in my own car, but finally it was my turn. I’m just proud of our guys. We’ve won the last two here and obviously that says a lot about our program.”

Yeley, a former USAC champion who has logged many laps at Eldora in sprint and midget race cars, but has limited Late Model experience, was happy with his effort against the more Late Model-familiar Bowyer.

“It was a great run, and a ton of fun to come back here and run second and to challenge Clint there at the end,” said Yeley, whose best previous Prelude finish was seventh in 2006. “That was probably the most important thing. He owns a Late Model team, he’s run them and that’s where he came from. ... Obviously I would’ve rather won, but at the end of the day second wasn’t too bad.”

Almirola never fell more than a few car lengths behind the top two finishers and was happy with his effort after struggling in his previous five Prelude starts.

“To come out here and run with so many guys with so much dirt experience, and this being my sixth race ever on dirt, this is just awesome,” Almirola said. “I think my best finish before was eighth, and I couldn’t even see the lead all night. So, tonight, to be able to see the lead and kind of dice it up and race with the leaders and maybe have a shot at winning if something happened to Clint and J.J., I felt like I had an honest shot at winning the race.”

Stewart, owner of Eldora Speedway and a three-time Prelude winner, was never a factor in the race and finished 20th. While as a driver he wasn’t very satisfied with his finish, as the track owner he was happy with the event.

“We had another first-time winner tonight. That’s what the fun part is,” said Stewart, a two-time NASCAR Sprint Cup Series champion. “Watching Marcos Ambrose win his heat race and Jason Leffler win his heat race in their first time being here – that’s the stuff that makes you smile, and it’s fun to watch all these guys have a good time.”