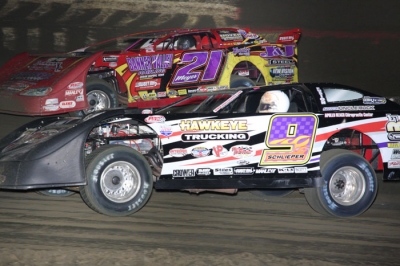 GIBSONTON, Fla. (Feb. 6) — Rebounding after failing to make Tuesday night's feature, Hall of Famer Billy Moyer of Batesville, Ark., took the lead from Terry Casey on the 23rd lap and cruised to his career-leading 16th special event victory at East Bay Raceway Park. Moyer earned $5,000 for winning the third round of the Dart Winternationals, his first victory at East Bay since 2006. | Slideshow

The seventh-starting Moyer and Casey, the New London, Wis., driver who took the lead from polesitter Dan Schlieper on the sixth lap, had an exciting duel just past the midpoint of the 30-lap race. Moyer nearly got around Casey when they crossed under the flagstand at the 20th lap. A lap later, the high-running Moyer was poised to complete the move when the low-running Casey made contact as they crossed the start-finish line, helping Casey stay out front.

Casey nearly got sideways in turn three on the 22nd lap, and Moyer regained his momentum to charge around Casey on the 23rd lap. Moyer began pulling away and was all alone when everything went wrong for Casey on lap 27. Casey, who had moved up to the high groove while holding the second spot, got together with Wayne Chinn in turn two to spoil his best run of the Georgia-Florida Speedweeks.

Moyer restarted with another Wisconsin driver, Dan Schlieper, hot on his heels for a three-lap shootout on lap 27, but Schlieper couldn't get within striking distance in the final laps. Schlieper ended up second with 12th-starting Don O'Neal third. Matt Miller, last night's winner who started 13th, and Josh Richards rounded out the top five. The race was slowed by five yellow flags, none for serious incidents. Steve Francis was running third in the early laps but slowed to bring out a lap-eight caution after his radiator got knocked into the fan.

Moyer enjoyed another trip to victory lane at East Bay after a rough night Tuesday. "This is as tough as it gets right here, for sure," the 50-year-old veteran said. "Everything's gotta go your way. Having the fastest car a lot of times doesn't always win here, just everything's gotta go your way the whole night, sort of the way mine didn't go last night. We had a pretty good night and that door gotta into my tire and cut my tire down and I was pretty much done for the night.

"Early in the year like this definitely gets the morale up on the whole team. My guys work real hard every day on that thing, and definitely I can tell the difference in how they react from how we win and don't win."

Details of the night's preliminary races, with corrected and official finishes:

Tim Dohm won a caution-plagued Strawberry Dash to earn the 25th starting spot in the feature. Dohm, who went to his backup car after blowing a motor as he pulled on the track for Wednesday's time trials, led all the way to outrun Ray Cook.

In a three-car battle for the lead after a lap-four restart, Darren Miller fought off challenges from Ray Cook and Wayne Chinn and went on to a victory for his first feature start at East Bay since 2006. Miller dominated early in the race, but he was suddenly vulnerable on the first restart. Cook took the lead on the sixth lap, but after Miller regained the point a lap later, Cook slipped high in turn two and got into the wall to draw a caution. Miller led comfortably after the lap-eight restart while Chinn got the final transfer spot. Eddie Carrier Jr. and Rohn Moon were battling for the third spot when Carrier got into Moon entering turn three on the 10th lap. Carrier spun into the infield while Moon was sent into the outside wall. Dan Stone, who started deep in the field, was third after his last-ditch challenge of Chinn fell short. A lap-four caution appeared when Kellen Chadwick and Shon Flanary got together exiting turn two.

Dennis Erb Jr., inheriting the lead when Chuck Harper was penalized for a bad restart, led the final nine laps to transfer to the feature. Harper was left to battle with fellow West Virginian Tim Dohm, who was trying to rebound in his backup car after missing time trials altogether. Dohm pulled nearly alongside twice in the final laps, but couldn't complete the pass. A turn-four scramble that included Jeep Van Wormer, Bryan Barber, Jackie Boggs and Doug Blashe brought out the race's first caution on lap two. Jared Hawkins spun in turn four on the third lap (triggering spins by Brian Shirley and Bob Geiger) for another caution and Brian Shirley slowed in turn two on the sixth lap for yet another yellow.

Donnie Moran, inheriting the point when race-long leader Scott James lost power in a plume of turn-three smoke, led the last three of 12 laps for a victory. Moran, who was in a feisty battle for the second spot while James led, nearly fell to third before a lap-nine caution, but the yellow negated Bart Hartman's pass. Hartman restarted second on the lap-nine restart, but he faltered exiting turn two on the 10th lap, allowing Shannon Babb and then Justin Rattliff past. Babb went on to finish second ahead of Rattliff while Hartman settled for fourth. Front-row starter Damon Eller swapped the second spot with Moran twice in the early laps, but he fell back as far as sixth and never contended in the second half of the race. Four cautions slowed the action, none for major incidents.

Josh Richards, starting outside the front row, led all the way while third-starting Don O'Neal grabbed the second transfer spot. Polesitter Ray Cook dropped from second to fifth through the middle stages and Rick Eckert got the third and final transfer spot. Darren Miller took a shot at Eckert in the closing laps but settled for fourth. A lap-eight caution came out when Eddie Carrier Jr. stopped in turn four after some rough-riding in the high groove. Austin Hubbard spun in turn four to bring out a lap-three caution. A lap-one caution appeared when Tim McCreadie spun in turn two, requiring a complete restart. McCreadie was pushed off the track. Late-comer Wendell Wallace tagged the tail and used the heat race as a hot-lap session in his first 2008 appearance at East Bay in the GRT house car.

Dan Schlieper won an early battle with polesitter and fellow front-row starter Steve Shaver in the early laps and raced to a 10-lap victory. Shaver settled for second while fourth-starting Mike Marlar ran third throughout the race. Wayne Chinn got within striking distance of Marlar a few times but lost two spots on the eighth lap, moving Vic Coffey up to finish fourth. Third-starting Dan Stone faded from contention early and ended up eighth. Two cautions slowed the action. Donald Beyers was turned around on the backstretch on the seventh lap and Anthony White spun in turn two on the lap-seven restart.

Terry English won a groove-swapping, lead-swapping duel with polesitter Chris Wall over the first three laps and pulled away for a victory. Wall, second on a lap-three restart, got too high in turns one and two and allowed Bryan Collins and Doug Horton to slip underneath. Wall tried to claw back into a transfer position, but Collins and Horton held on to earn their first feature starts of the week. Rodney Melvin ended up fifth, never in the mix up front. The lone caution appeared on the third lap for debris and sixth-starting Clint Smith pulled off during the yellow.

Unheralded Jason McBride won from the pole as he outran Dave Tyrchniewicz for his first East Bay heat race victory. Kevin Cole outdueled Chuck Harper to earn the third and final transfer spot while Dennis Erb Jr., struggling for the second straight night, finished fifth ahead of Tim Dohm, who started on the tail in a backup car after breaking during time trials. The only caution appeared on the seventh lap when Bob Geiger turned around inside turn two.

Polesitter Terry Casey got out by himself early and pulled away for an easy 10-lap victory. Eric Jacobsen ran second nine laps, but when he was caught up behind the slower car of Anthony Ferguson on the final lap, Earl Pearson Jr. swept around to grab the second spot. Pearson, too, was held up behind Ferguson as the pursuers stacked up behind him. Jacobsen held on to third, finishing just ahead of an onrushing Damon Eller.

Steve Francis outran fast qualifier Matt Miller on the first lap and raced away to a 10-lap victory. Third-starting Billy Moyer dropped Miller to third on the second lap and held the second spot the rest of the way. Miller couldn't keep up with the frontrunners, falling nearly a straightaway behind midway through the race but maintaining the third and final transfer spot over Scott James. Donnie Moran finished fifth, Shannon Babb sixth and fourth-starting Bart Hartman seventh in a stacked heat race. Moran nearly got out of shape in the final turn, but survived to hold off Babb.

Tuesday night's feature winner Matt Miller staked an early claim to Wednesday's big money by setting fast time before the third round of East Bay Raceway Park's Dart Winternationals. Miller posted a time of 14.838 seconds at the third-mile oval near Tampa. Other drivers fastest in their respective groups in the group qualifying system used this week by the Lucas Oil Late Model Dirt Series: Terry Casey (14.844) of New London, Wis.; Steve Shaver (15.052) of Vienna, W.Va.; Ray Cook (15.124) of Brasstown, N.C.; Chris Wall (15.047) of Holden, La.; and a surprising Jason McBride (14.931) of Carbondale, Ill., who transferred to his first-ever feature at East Bay the previous night.

The 75 entrants was the most of the week. ... Tim Dohm, Monday's fast qualifier, rolled out for his time but lost power before taking the green flag. His car was pushed to the infield. ... Newcomers for Wednesday night's action: Earl Pearson Jr., Darren Miller, Bart Hartman, Jason Riggs, Rodney Melvin and Kurt Owens (in the Warrior Race Cars house car)

x-Collins lost the 10th starting spot when he went to backup car; Harper also went to a backup car, but he was already slated for the 12th row.