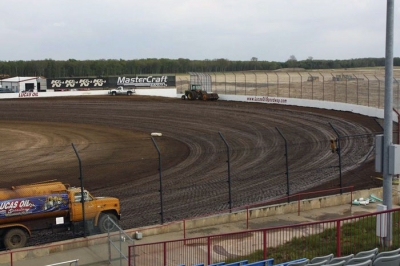 The new wall in turns one and two at Lucas Oil Speedway. (cbracephotos.com)

Many observers rank Lucas Oil Speedway among the finest dirt tracks in the country, and there's no doubt it has amenities many tracks are missing. From the massive video scoreboard to the 21 luxury suites to the all-paved pit area, the state-of-the-art facility certainly has its creature comforts.

One thing the Wheatland, Mo., oval was missing was a wall in turns one and two, but that's changed for the 2011 season. With the 19th annual Dart Show-Me 100 coming up this weekend, the track is now completely encircled by concrete as a white wall and full catch-fence was installed at the south end during the off-season. | Complete Show-Me 100 coverage

Previously, drivers could exit the speedway down the frontstretch, or rim-riding drivers could've potentially slipped over the banking. That won't happen anymore, but the addition of the wall doesn't change things drastically heading into the $30,000-to-win Lucas Oil Late Model Dirt Series event, said driver Jesse Stovall of Galena, Mo.

"They put the wall about 10 or 12 feet back off the where the actual edge of the racetrack is. There's a wall there ... but it didn't really change (anything) really," said Stovall, who competed at Wheatland last month in Lucas Oil MLRA action. "It pretty much raced the same, and the track's the same shape. It all just kind of made the place kinda look better."

Other notes heading for this weekend's Show-Me 100:

FIRST EVENT TO HIT A MAJOR BROADCAST NETWORK: Seemingly everyone is excited that this year's event will be televised on CBS Sports Spectacular, airing at 3 p.m. (EDT) on June 19. It'll mark the first-ever Dirt Late Model event on a major broadcast network. "Having the Lucas Oil Series air on the CBS Sports Spectacular show is huge for our fans, racers, and the whole Dirt Late Model industry," said series director Ritchie Lewis. "It also gives us an opportunity to reach a large sector of sports fans that might not normally tune into a Dirt Late Model event."

WILL HARD-TIRE RULE EVEN THE PLAYING FIELD?: Last year's Show-Me 100 tire rule allowed a total of 10 types of tires of varying compounds among Hoosier and American Racers, but this year's tire rule limits drivers to harder rubber only. Regional drivers who compete on tours with hard-compound tire rules are encouraged with the change in facing national drivers who carry more tires in their haulers and have a wider knowledge about tire selection. “It should take some of the guessing game out of it and let us focus on other stuff,” Iowa driver Chad Simpson said. “I’m thinking we’ll maybe have a little bit of an edge on those guys that don’t run those tires normally.” The legal tires: American Racer MD56; Hoosier Crate 55, 1600, LM40 and WRS 55. The four Hoosier tires are similar hardness but each may have different characteristics otherwise.

SPECIAL RACES PART OF SHOW-ME 100: The Ohlins Chassis Manufacturers' Dash and Appliancezone.com Race of Champions are part of Friday's action at Wheatland. The manufacturer's dash pays $500 to the winner of the 10-lap race. The Race of Champions pays $1,000 to the winner in a battle of past Show-Me 100 winners. The expected field: Scott Bloomquist, Billy Moyer, Terry Phillips, Ray Cook, Rick Aukland, Wendell Wallace, Freddy Smith and Brian Birkhofer.

ROAD TO WHEATLAND COMES TO AND END: The Lucas Oil Series pays extra tow money early in the season for the Sunoco Race Fuels Road to Wheatland, and 19 drivers have perfect series attendance heading to Lucas Oil Speedway. In addition, drivers that have maintained perfect attendance and use Sunoco exclusively in their race cars are in line for $2,000 bonus if they win Saturday's 100-lapper. The drivers eligible for the bonus: Earl Pearson Jr., Steve Casebolt, Chris Wall and Brad Neat.

THREE VICTORIES IN A ROW FOR LONG: One Late Model driver that can claim the most success this season at Lucas Oil Speedway is Rylan Long of Lockwood, Mo., who has three straight weekly victories at the 3/8-mile oval. But Long's victories have come in United Late Model Association-sanctioned events for cars with limited powerplants, so the open-competition action will provide a different challenge. At last year's Show-Me 100, Long was among the slowest qualifiers and finished second-to-last in his heat race.

ODDS AND ENDS: Red Buck Cigars is paying $250 to Friday's fast qualifier. ... Gus the Cool Mule, the race mascot who originated at West Plains (Mo.) Motor Speedway, will be on hand at Wheatland. ... Kurt Busch's AAA-sponsored NASCAR Sprint Cup Car will be on display in the vendor section. ... A driver autograph session is scheduled for 5 p.m. Saturday on the grandstand side.