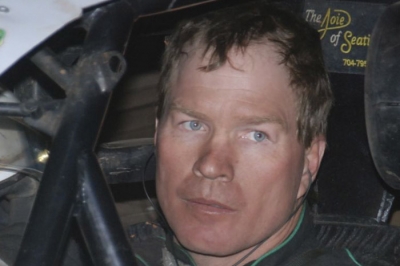 Chris Wall will soon be driving a Longhorn Chassis. (DirtonDirt.com)

Looking to improve the performance of his ApplianceZone.com sponsored race team, Chris Wall of Springfield, La., will soon have a Longhorn Chassis to complement his MasterSbilt Race Car.

Wall, the 2010 Lucas Oil Late Model Dirt Series Rookie of the Year, has driven MasterSbilts for many years and will now split time between the two chassis brands depending on track conditions.

The decision to add the Longhorn, an in-house chassis for Bobby Labonte Racing drivers Earl Pearson Jr. and Brad Neat, comes after Wall got off to a slow start in 2011. The 43-year-old driver is 11th in the Lucas Oil Series standings, with just one top-10 finish in a series race this year.

“This is definitely 100 percent in an effort to improve our performance,” Wall said Saturday afternoon as he prepared to compete in a Mississippi State Series Challenge Series event at Whynot (Miss.) Motorsports Park, a race he won. “I don’t feel like where we’re at with our program right now that we can outrun Earl Pearson, Scott Bloomquist and Jimmy Owens. I think we’re good enough to run top-ten. But me and my sponsor are not content with that. We’re very competitive and our goal is to win races, and we feel like this is a step in that direction.

“We’re just gonna feel the waters out. We’re running pretty competitive right now in our (MasterSbilt), so we’re just adding the Longhorn and we’re gonna see how it goes. We’re gonna run whichever car we think is the best car for the particular track we’re racing at.”
Wall will travel to the Bobby Labonte Racing shop in Trinity, N.C., this week to pick up the new race car and plans to begin testing it as soon as possible. When Wall will debut the Longhorn will depend on how the testing goes and could be “as early as next week or it could be a month from now.”

While Wall is realistic and knows it will take some time to adjust to the Longhorn, he is confident in the race car and is looking forward to helping with the continued development of the Longhorn program.

“I think anytime you switch to a different chassis manufacturer there’s always concern no matter what the name brand,” Wall said. “I hope that we can bring a little bit to the table ourselves and help them continue getting the car better. I think they have an excellent product. The biggest thing with Earl and that group, I feel like information won’t be a problem and we’ll be in the know with everything going on with the cars.” – Joshua Joiner

ROARING KNOB PREPARES TO HOST LUCAS OIL SERIES: For the first time in the track’s history, Roaring Knob Motorsports Complex in Markleysburg, Pa., will step into the national spotlight Saturday night by hosting the Lucas Oil Late Model Dirt Series. The $10,000-to-win event is part of a doubleheader weekend for the series in the state of Pennsylvania that kicks off Friday night at Bedford Speedway. Roaring Knob is uncharted territory for the series as none of the top 20 drivers in the points standings have ever competed at Roaring Knob. Rick Jones took over as promoter of the 3/8-mile racetrack last year and immediately wanted to bring the Lucas Oil Series to the track. “We have had success with the UFO and Three State Flyer Series, and to add a Lucas Oil Series race to our schedule was definitely a plus for the track,” said Jones, who kept busy during the off-season adding several truckloads of clay to the track surface. Even though the season opener was rained out last week, the track has been able to practice twice on the new surface. “It’s held up really well, and with the moisture this week and a promising forecast for Saturday night, we will be ready to go,” Jones said. – James Essex

SUPERIOR SPEEDWAY SIGNS AMSOIL AS TITLE SPONSOR: Super (Wis.) Speedway will be renamed AMSOIL Speedway after track officials inked a three-year title sponsor deal with AMSOIL INC., an engine oil and lubrication company whose headquarters, 700,000-foot manufacturing plant and main distribution center are located in Superior. AMSOIL is also the title sponsor of the WISSOTA Promoters Association, known as the AMSOIL Dirt Track Series. AMSOIL Speedway will be fully WISSOTA sanctioned in 2011 and will feature WISSOTA Late Models, Modifieds, Super Stocks, Midwest Modifieds and Pure Stocks every Friday night throughout the summer, with opening night set for May 13. For more information visit track website at www.amsoilspeedway.com. – From track reports

ELKINS SPEEDWAY TO OPEN UNDER NEW MANAGEMENT IN 2011: Elkins Speedway in Kerens, W.Va., will open in 2011 with new promoters at the helm. Norm ‘Mac’ McDougal, a well know car owner and sponsor, will promote the racetrack with Jim Skidmore filling the role of track manager. McDougal owns the No. 7 Late Model currently driven by Billy Holbert and sponsors several other drivers including Josh Richards and Derek Rogers. Skidmore, who will handle the daily management of the track, is the son of Richard Skidmore, who was one of the original members that built the speedway in 1952. The Skidmore family has been involved with the track for decades and Jimmy has performed every task at the track, including prior stints as manager and promoter. The track will host an open practice Friday night, with the regular season kicking off May 6. The 11th annual Chuck Gear Memorial on June 17 highlights the track’s 2011 schedule. The UFO Race Championship event will pay $3,000 to the winner. For more information, visit the new track website at www.elkinsraceway.net. – Bob Reed

SERIES SCHEDULE CHANGES: The rained out Comp Cams Super Dirt Series and MARS DIRTcar Series co-sanctioned event April 22 at Batesville Motor Speedway in Locust Grove, Ark., has been rescheduled for Friday night. Because of scheduling conflicts, Friday’s makeup will only be sanctioned by the Comp Cams Series. ... The June 17 $3,000-to-win UFO event at Elkins Raceway is an addition to the series schedule. It is part of a doubleheader weekend for the series that also includes another $3,000-to-win event at Thunder Valley Raceway in Central City, Pa. ... The $2,000-to-win Northern Allstars Late Model Series event at Highland (Ill.) Speedway that was rained out on April 23 has been rescheduled for Saturday.