From correspondent, series and track reports 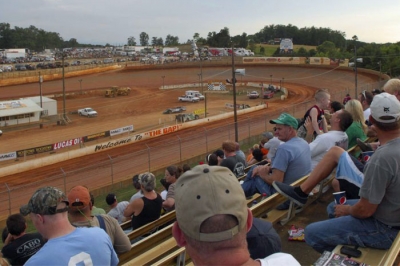 "This was originally a $4,000-to-win race, but Stan Lester, one of the owners of the series, met with (track owners) Joe and Phyllis Loven, and the money was increased to $10,000," said series director Tim McAbee. "I'll be a little disappointed if there's not at least 30 cars there for our race."

Based on driver schedules, it appears as though the increase in prize money will have the intended affect for the April 23 event. Among those who have indicated they plan to race are Tennessee stars Scott Bloomquist and Jimmy Owens, Ray Cook of Brasstown, N.C., Chris Madden of Gray Court, S.C., and Jonathan Davenport of Blairsville, Ga., a two-time Ultimate race winner. Among other series regulars expected are Casey Roberts of Toccoa, Ga., Chris Ferguson of Mount Holly, N.C., and points leader Chip Brindle of Chatsworth, Ga., a rookie in the Super Late Model division. "He's going to be a head-turner," McAbee says of Brindle.

The series hopes that branching out to the 4/10-mile oval in east Tennessee for the 60-lap event will help reach a new fan base.

"We're venturing out more this year," McAbee said. "I'm looking forward to getting into that area. We've got three dates set with Volunteer. We just added one for May 6 to go along with this weekend and July 16.

"This series was previously known as the SAS East Series. We were kind of like a little sister to the Southern All Star Series. Now, we're trying to shed that little sister image and reaching new areas and new fans will help us to do that."

BUBBA THE LOVE SPONGE BUYS OCALA SPEEDWAY: Todd Clem, the nationally syndicated radio personality known as Bubba the Love Sponge, purchased Ocala (Fla.) Speedway with a group of investors and promises to operate Florida's oldest racetrack "to give back to the racers." Clem, who bought the 3/8-mile oval from Mike Peters, renamed it Bubba Raceway Park and vowed not to make a living at the expense of racers. "Very few track owners want to give back," Clem said in a press release. "Well, those days are over at my track. ... if you're a track owner, be mad or change your ways. If you're a racer, come to my track and have fun, be treated fair, and get paid square." Clem has closed the track until reopening May 13 with a $5,000-to-win Late Model event called the inaugural Bubba Army Open. Clem also announced a track point fund of $32,000. — From track reports

VAUGHT FINISHES NINTH IN TALLADEGA ARCA RACE: Dirt Late Model standout Will Vaught of Crane, Mo., made a 26th-to-ninth run Saturday at Talladega (Ala.) Superspeedway in the ARCA-sanctioned 3 Amigos 250. "I had a lot of fun out there. We just needed a little more steam under the hood to get us into the top five," said the 24-year-old Vaught, whose No. 51 CureDuchenne.org Chevrolet Impala received backing from James Finch of Phoenix Racing. "We lived up to our gameplan, stayed out of trouble and we were able to get out of here in one piece and with a good finish. I'm happy." Vaught was 15th with 10 laps remaining and continued to make progress, gaining three spots on the final lap of the event won by part-time Dirt Late Model racer Ty Dillon of Lewisville, N.C. — Bryan Wimberley

ARKANSAS CREW MEMBER GETS CHANCE BEHIND WHEEL: Long-time Dewaine Hottinger crew member Geoff Aitken got a chance to get behind the wheel of a Late Model on April 16, finishing fifth among seven cars in a Crate event at Centerville (Ark.) Speedway. Aitken found out he was driving the new Hott Motorsports No. 16 he helped build just two days earlier when Hottinger surprised the crew member who has helped the team since he was 8 years old. "His tireless help over the years has really been big for me," Hottinger said. "I really owe him a lot, and with the help of (fellow Russellville, Ark., driver) Jon Kirby we were able to put this deal together to show our appreciation, and so that on off weekends he can go and have some fun." — Ben Shelton

SERIES SCHEDULE CHANGES: The Northern Allstars have added April 21-22 events at Tri-City Speedway in Granite City, Ill., and April 23 at Highland (Ill.) Speedway. All pay $2,000-to-win. ... The Southern All Stars removed an April 23 event at Cochran (Ga.) Motor Speedway from the schedule, and shifted its Waycross (Ga.) Motor Speedway event to Sept. 2. ... The Northern Tier ULMS tour has added an April 29 event at Tri-City Speedway in Franklin, Pa.; the April 30 ULMS date at McKean County (Pa.) Raceway was postponed to July 14 because of wet grounds. ... The Deery Brothers Summer Series raced postponed by inclement weather at Davenport (Iowa) Speedway on April 15 has been moved to Davenport's half-mile oval for its Sept. 9 makeup. ... WISSOTA's Dart Challenge series added a $2,000-to-win event at Brown County Speedway in Aberdeen, S.D., for Aug. 17.