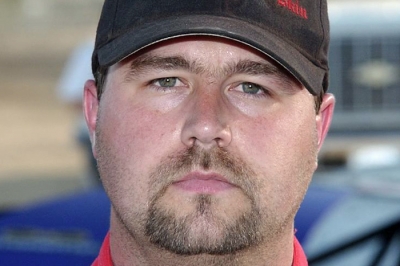 The Western Allstars DIRTcar Late Model Series will roar back into action Saturday at Antioch Speedway. No one is more battle-ready for the tour’s grand return to the Pacific Coast’s short-track scene than Golden State star Bobby Hogge IV, who will finally get his chance to enter a Western Allstars event wearing the champion’s crown.

After sitting silent last year, the DIRTcar-sanctioned series kicks off an eight-track, 14-race 2011 schedule at promoter John Soares’s 3/8-mile oval located about an hour outside of San Francisco.

“It’s great to have the Western Allstars Series running again,” said Hogge, a 34-year-old talent from Salinas, Calif., who won the last Western Allstars points title, in 2009. “Any time you add more Late Model shows out here in California it’s a plus — and with $2,000 to win and $400 to start, that makes it pretty lucrative for everybody. We like to support those kinds of shows.”

Hogge also likes the track that will host the Western Allstars season opener. He has a long, successful history competing at Antioch, including victories in two of the three Western Allstars features contested there over the 2008 and 2009 campaigns.

“We have a lot of laps around that place,” said Hogge, who sits atop the all-time Western Allstars list with 17 victories from 2006-2009. “It’s about a two-hour drive for us, but we used to go there all the time with the modified. If Watsonville (Ocean Speedway) wasn’t so close to us, I would almost call Antioch our home track simply because we were running there just about every Saturday in the late ‘90s through the early 2000s.”

Hogge will put his Antioch knowledge to use this Saturday night when he pulls double-duty, entering both the 30-lap Western Allstars headliner and the supporting modified action. He’ll run cars from his family-owned stable in both divisions.

“We want to support racing as much as we can out here,” said Hogge, who will steer a Victory Circle Chassis mount in the Western Allstars program. “If we can take two cars and help put on twice as good a show, that’s what we’ll do as long as we can afford it. It’s just too bad we don’t have a big enough hauler to shove both cars in.

“We’re really looking forward to Saturday night,” he added. “(Promoter) John Soares always does a good job prepping the track and taking care of the racers, so we like supporting places like that.”

Beyond the lidlifter at Antioch, Hogge is intrigued by the opportunities in DIRTcar regional points in both cars that could provide extra cash.

“We’ll see how the cards play out,” said Hogge. “We have a lot of racing we want to do with the Late Model and the modified and maybe we’ll be able to collect some of that money that’s being put out there.”

Becoming the first repeat Western Allstars champion would be a major accomplishment for Hogge, who will face fierce competition from such drivers as 2008 tour champion Chris Shannon of Merced, Calif., Matt and Ken Micheli of Live Oak, Calif., Jeff Decker of Morgan Hill, Calif., and Richard Papenhausen of Chico, Calif.

“We’re very excited to have the DIRTcar Western Allstars Late Model Series back in action this year with the best racers on the West Coast,” said Chris Morgan, director of Western operations for DIRTcar. “The return of the tour will help shine a brighter spotlight on the West Coast’s Late Model drivers and give them more opportunities to earn the type of major recognition that their fellow racers in other parts of the country routinely receive.”