Notes: Madden heads to VMS in role of favorite 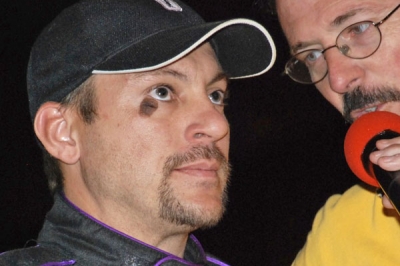 Chris Madden is going for his third straight WoO victory at VMS. (DirtonDirt.com)

Who stacks up as the favorite to win the second annual NAPA of King William Commonwealth 100 this weekend (April 15-16) at Virginia Motor Speedway?

That lofty status undoubtedly belongs to Chris Madden of Gray Court, S.C., the winner of last year’s inaugural 100-lap spring spectacular at Bill Sawyer’s showplace half-mile oval. When the discussion turns to the drivers most likely to pocket the race’s $25,000 top prize, his VMS performance record is simply too strong to disregard

“I just fell in love with the place the first time I ran there,” said Madden, whose 2010 Commonwealth 100 victory marked his third win in as many appearances at the track over a three-year period. “I like big, high-speed places, and (VMS) has a lot of character to it.”

Madden, 35, used a savvy tire choice and a cool, calm approach to emerge triumphant in last year’s Commonwealth 100. Some doubt crept into his mind early in the race when his hard-compound tires fired slowly and he slipped from his outside pole starting spot to nearly out of the top 10, but that rubber allowed him to outlast his softer-tired rivals. Over the final 19 laps Madden watched the four drivers ahead of him all succumb to flat right-rear tires, culminating on a lap-91 restart when he inherited the lead after long-time pacesetter Darrell Lanigan of Union, Ky., slowed with a flat.

Already a two-time feature winner this season, Madden will bring his Bloomquist Race Car into the Commonwealth 100 weekend with plenty of momentum. He will shoot for his third straight WoO victory at VMS, where he captured a 50-lap tour event in April 2009.

Despite a directive from his car owner barring him from running WoO events until further notice, Tim Fuller of Watertown, N.Y., isn’t ready to give up on continuing as a tour regular.

With his car owner John Wight at odds with World Racing Group officials over sanctioning and scheduling issues (Wight owns New York’s Brewerton and Fulton speedways), Fuller finds himself caught in the middle. He’s unable to enter Wight’s Gypsum Express equipment in WoO shows, so he plans to drive his good buddy Clint Smith’s second car in the Commonwealth 100.

“I want to run with the World of Outlaws and I’m real appreciative that Cat (Smith) and Chub Frank offered me cars to race,” said Fuller, who placed eighth in last year’s Commonwealth 100 and owns a career-best VMS finish of third in WoO action (July 2007). “I accepted Cat’s offer for Virginia because it gives me two more weeks before the next Outlaw shows where anything can change.”

Fuller said he’s hoping other avenues open up that allow him to continue following the WoO. He’s not interested in running Smith’s — or anyone else’s — backup car regularly because he doesn’t “want to hurt their program.”

Darrell Lanigan suffered crushing heartbreak in last year’s Commonwealth 100, relinquishing the lead to a worn-out right-rear tire on a lap-91 restart after running out front since lap four. He settled for a 14th-place finish.

The race represented more disappointment in 100-lap WoO events for the 2008 tour champion, who had experienced extra-distance near-misses before the Commonwealth (runner-up finishes in the 2008 and 2009 Firecracker 100s and the ’09 Lone Star 100, late misfortune in the 2009 Colossal 100) and would go on to experience more in ’10 (a third straight second-place run in the Firecracker 100 and engine failure while running third in the USA Nationals). But Lanigan finally broke through with a convincing victory in last month’s Cash Cow 100 at Columbus (Miss.) Speedway, so there should be no more “What now?” thoughts coursing through his mind in 100-lappers.

Lanigan also enters this weekend’s action riding a two-race WoO win streak and ranks eighth in the points standings – just 54 points out of the lead – despite missing the season opener on Feb. 17 at Florida’s Volusia Speedway Park because of a medical issue. In addition, he hasn’t been in a race car since his triumph on March 25 at Ocala (Fla.) Speedway ‚ weather prevented the next three scheduled events from being contested — so he’s had nearly a month to work out the lower-back pain that was still plaguing him after his last competition.

Josh Richards’s 28 career WoO A-Main victories have come at 18 different tracks in 10 states and one Canadian province, but missing from his resume is a win in the Commonwealth of Virginia.

VMS has been a particular headache for Richards, whose lone top-five run in seven WoO races contested there since 2005 is a third, on April 11, 2008. He’s never even led a lap in a tour feature at the track.

Richards, 23, of Shinnston, W.Va., finished 12th in last year’s Commonwealth 100, but he was a contender. He sat in the runner-up spot behind Lanigan until lap 87 when a flat tire forced him to pit.

“We kind of struggled there years back, but last year we were good,” said Richards, who enters this weekend’s racing leading the WoO points standings in search of his third consecutive championship. “We were running second when we were blew a tire like everybody else started to. It was disappointing, but I felt like that was the best we’ve ever been there so we’re confident going into this year’s race.

“There’s a lot of good cars coming in this weekend, but with the way our program is going I feel really comfortable and I’m looking forward to going out there to race. Hopefully we can get our car balanced so we don’t have to hustle it and lean on the right-rear tire too much, and then we’ll be there at the end.”

Reigning UMP Summernationals champion Jason Feger of Bloomington, Ill., will make his first-ever visit to VMS for the Commonwealth 100. He's fourth in WoO points. ... Nininger Tire and Auto Service of Brunswick, Md., has added a bonus for regional and local racers in the Commonwealth 100. The three highest-finishing drivers not ranked in the top 15 of a national tour are eligible for prizes of $250, $150 and $100. ...Last year Coleby Frye of Dover, Pa., was in the pit area working as a crew member for Austin Hubbard during the Commonwealth 100. This year he has his family-owned Dirt Late Model entered in the event.