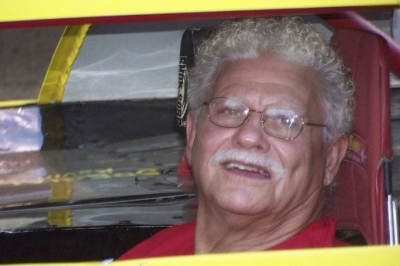 Vicki Bargetzi knew her father loved his children, but she also knew it was unlikely that Chris Bargetzi would buy her an on-time birthday gift because the retired machinist's prime focus was usually on dirt track racing.

Vicki and other family members are gathering this week to remember her father, who died Friday from injuries suffered in a tree-cutting accident near his Highland, Ill., hometown. He was 75.

Bargetzi's yellow No. 441 Late Models were ever-present at St. Louis-area and other Illinois tracks for more than four decades. When the curly, gray-headed Bargetzi ended his 32-year driving career in '92, he continued fielding Late Models until his death for championship-winning drivers including Brian Ater of Decatur, Ill., and Brian Wolfmeier of House Springs, Mo.

As a tribute to the three-time track champion at Highland Speedway on Saturday, his grandson Cody Ventimiglia, a bomber driver at the quarter-mile oval, took a memorial lap in Bargetzi's car, then carried the U.S. flag around the track during the national anthem.

Some of Bargetzi's drivers remembered driving for a car owner who enjoyed maintaining a Late Model team to stay close to racing. Ater first drove Bargetzi's cars in the early 1990s, capturing a track championship at Macon (Ill.) Speedway, and then Wolfmeier began a long stretch of off-and-on stints with Bargetzi.

"He was just one of those good ol' guys. Basically racing was his whole life," said the 44-year-old Wolfmeier, who called Bargetzi "Uncle Chris" because Wolfmeier's brother's wife was his niece. "Any time you ever talked to him, all he wanted to talk about was the race car.

"He was 75 ... he couldn't get up and down (from the shop floor) quite as easy, but he was always crawling around and getting in there working on (the cars)," said Wolfmeier, who captured track titles at Godfrey (Ill.) Speedway and I-55 Raceway in Pevely, Mo., in Bargetzi's equipment.

Like any car owner-driver relationship, the pair had their disagreements, Wolfmeier said, but Bargetzi "was always willing to help somebody out if they needed it." And he apparently softened a bit from his driving days, Wolfmeier said.

"I know back in the day when he raced he was an ornery old fart," Wolfmeier said with a laugh. "He was ready to get in a fight if someone else was. He didn't back down from anybody, that's for sure."

Instead of mixing it up as a car owner, Bargetzi was more concerned with making sure his car was ready to race.

"He was really picky about his car," Wolfmeier said. "He always wanted it to be the way he wanted it to be. If there was a dent in it, he'd hammer it out."

Highland driver Dan Jacober, who has driven for Bargetzi recently, said the car owner's "big thing was not to wreck it." Bargetzi maintained a routine that included scaling the car every Saturday to make sure the team was prepared with the right suspension setups.

"He was real meticulous," said the 48-year-old Jacober, a union carpenter. "There were certain things he wanted a certain way. Every Sunday you wash the car thoroughly, and he always kept to a schedule."

Bargetzi was instrumental in Jacober's driving career. As a teenager, Jacober's father wasn't so sure it was a good idea to become a race car driver, but Bargetzi provided space in his race shop and "coached me along the first couple of years."

"He's a great guy to drive for," said Jacober, adding that Bargetzi enjoyed the social aspects of the racetrack, too. "There was always something to eat when you were racing with Chris. ... He wasn't going to the races if he didn't have a full cooler and something to eat."

Bargetzi's funeral is scheduled for 10 a.m. Tuesday, April 12, at Evangelical United Church of Christ in Highland. Interment will be at Highland City Cemetery.

Memorials may be made to National Multiple Sclerosis Society. Expressions of sympathy may be sent to the family by visiting www.spengel-boulanger.com.