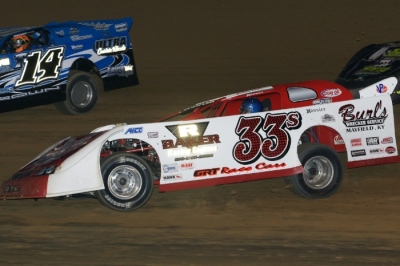 Kevin Cole (33) races to a third-place finish at Paducah on April 1. (kohlsracingphotos.com)

Making the most of little, Kevin Cole of Christopher, Ill., managed to capture his third Late Model championship last season at Paducah (Ky.) International Raceway. Two of Cole's PIR titles came with the well-equipped Scott Riggs Motorsports team, but he eked out last year's crown with a modest, low-budget car and a 9-year-old powerplant.

"It ain't like I'm broke," said the 32-year-old Cole, the father of two young boys, "but I'm not going to take money away from my family."

Cole still plans to field his own No. 3c Bob Pierce Race Car this season, but his program will get a boost in making occasional but regular starts in the No. 33 GRT Race Car owned by Willie Sellars of Mayfield, Ky., as he guns for his third consecutive crown at the 3/8-mile Paducah oval.

While Cole doesn't know Sellars well — the long-time car owner has successfully fielded cars for many years, including for standouts Eddie Pace and Steve Russell — he's enjoyed his brief time with him and crew member Jason Anderson.

Mechanical woes hampered the team's first attempted start in Clarksville, Tenn., but in Paducah's April 1 opener, Cole rallied from 16th to finish third in the UMP DIRTcar-sanctioned main event won by fellow Illinois driver Craig Smith. Despite the feature rally after the team over-indexed a birdcage in the heat race, Cole knows he needs to get better adjusted to the GRT Race Car, a chassis brand he'd never driven before.

Don't count him out. Cole was among the winningest racers in southern Illinois the past six seasons, including an impressive 20-victory season in 2007.

"I think we can get it better and hopefully be all right," Cole said, hopefully the pairing with Sellars pans out. "If we can make enough money to race and win a little money, we're going to race."

While Cole has limped along with his own aging powerplant — it's reliable, but gives up perhaps 100 horsepower to competitors — he's glad to have the well-prepared Sellars car and a powerful Russell Baker engine.

"I think he's definitely got the motor and the car to win some races," Cole said. — Todd Turner

VMS EXTENDS TICKET PRICING FOR COMMONWEALTH 100: Virginia Motor Speedway has extended a ticket special for fans planning to attend the World of Outlaws Late Model Series-sanctioned Commonwealth 100 at the Jamaica, Va., oval on April 15-16. The track originally set an April 1 deadline for fans to take advantage of two-day tickets at $30 (adults)/$27 (senior citizens and military)/$15 (students ages 7-17), but decided to maintain the price for anyone buying a two-day ticket. "I think it's important that we look after the working man's pocketbook to make it affordable for him to be able to come to Virginia Motor Speedway for our biggest show of the year," track owner Bill Sawyer said. The $25,000-to-win event includes time trials and heat races on April 15 with consolation races, a non-qualifiers' race and 100-lap feature on April 16. Last year's event, won by Chris Madden of Gray Court, S.C., drew 56 Late Models. — Kevin Kovac

TRI-CITY PUSHES BACK OPENER TWO WEEKS: Off-season projects to rebuild concessions, bathrooms and offices aren't complete at Tri-City Speedway in Granite City, Ill., so the track has delayed the start of the racing season two weeks, the track announced. Preseason practice is now scheduled for Sunday, April 17, with the racing season opening with a Thursday-Friday doubleheader on April 21-22. The opening two nights of action include $2,000-to-win Super Late Model events sanctioned by the Monster Midwest Series. The opening weekend was originally scheduled to include three Monster Midwest Series events, but the program was reduced to two days. — From track reports

BUCKEYE CLASSIC RICHEST RACE AT ROCKY TOP: Rocky Top Raceway in Coal Grove, Ohio, has scheduled its richest-ever race on July 4 with the $10,000-to-win Buckeye Classic, an event that's part of the STARS Midwest Dirt Racing League. The 60-lapper is the marquee event on the first-year series. "We've always wanted to have a $10,000-to-win Late Model event and the timing this year came perfect with everything that is going on in the region July Fourth weekend," Rocky Top's T.J. Layne said. Southern and central Ohio is a hot spot for big races in early July. The O'Reilly All Stars go for $5,000-to-win on July 1 at K-C Raceway in Chillicothe; Portsmouth Raceway Park hosts a $10,000-to-win Lucas Oil Series event July 2; Muskingum County Speedway in Zanesville hosts a $10,000-to-win Lucas Oil event July 3; Rocky Top's Buckeye Classic is July 4; and Brushcreek Motorsports Complex in Peebles, Ohio, hosts its $10,000-to-win Hidden Gem on July 6. — From series and staff reports

ODDS AND ENDS: The Southern Regional Racing Series makes its first-ever appearance at Richmond (Ky.) Raceway on April 9 for the $3,000-to-win Frostbite 40. ... The Promoters Racing Organization Dirt Car Series announced that Miller Welders will provide $1,200 in contingency sponsorship for 2011 on the Mississippi-based tour. ... Tazewell (Tenn.) Speedway hosts a $1,500-to-win special for its Limited Late Models on April 9.