'Part of racing died' with loss of SAS tour founder 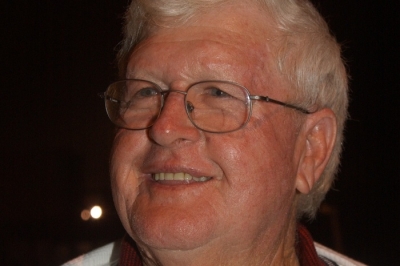 A racing pioneer who founded the longest-running Dirt Late Model series, beloved and legendary promoter B.J. Parker died Monday night at his Graysville, Ala., home. He was 78.

The silver-haired National Dirt Late Model Hall of Famer, who engaged everyone with an easy-going smile and his story-telling at Southern All Star Dirt Racing Series events from 1983-2004, succumbed to cancer he'd battled four years, according to son-in-law Lynn "Preacher" Phillips. | SAS history | Quotes | Blog | Slideshow

"Part of racing died when he died, I promise you, because he was a good one," said driver Clint Smith of Senoia, Ga., the only four-time Southern All Star champion. "He was probably one of the most reasonable and fair promoters in the racing business. There's not many people who have done as much for dirt racing as B.J. Parker did over the years."

"The racing industry has just lost one of the pioneers," said Donald Watson, who founded the O'Reilly Southern United Professional Racing tour. "He was what I would call a true Southern gentleman. I don't really, in all my racing, I can't remember anybody doubting B.J. Parker ... even the racers. They all respected him."

"B.J. is going to be missed by a lot of people. .... He had a passion," Phillips said. "Of course, he was a racer in his younger years, and pretty good as a race car driver. He had a passion for the sport. Not only has a promoter, but just as a lover of auto racing. There's some people that promote just to make a buck.

"Anybody that knew him, knew B.J. had a deep love for the sport, and I think more so for dirt racing. He really loved dirt track racing, Dirt Late Model racing."

Proud of his accomplishments, Parker called the Southern All Stars "the best series out there" upon announcing his plans seven years ago to sell the tour that operated throughout the Southeast.

"I know I'm blowing my own horn. I think we've got just as good as drivers as any series. They're not financially backed like a lot of the series, but as far as the talent, I think ours is just as good as any of 'em," Parker said in 2004 at Talladega Short Track. "You see when Clint (Smith) goes (to run on a national tour), and back when Duayne (Hommel) runs with 'em, and (Mike) Head runs with 'em, and Ronnie Johnson. A lot of the superstars on dirt — Dale (McDowell), Ray Cook, Rex Ritchey — ran Southern All Stars. And if you look at my champions over the years, Jeff Purvis, Jerry Inmon, Don Hester, I've got a lot to be proud of. A lot of memories."

Parker's long promoting career slowed in his 70s when he sold the Southern All Stars to Charles Roberts and David Miller in 2004, though he continued to dabble in promoting through the Southern Thunder Tour and other series in recent years. He was struck by cancer about four years ago and under hospice care at home in recent weeks, said former Southern All Star series director Kelley Carlton, one of Parker's proteges.

"It really kind of took a turn for the worse after Labor Day," Phillips said. "I tell you, he was a fighter."

Involved in racing initially as a driver, Parker's promotional career began in 1967, first at asphalt tracks with stints promoting Dixie Speedway in Midfield, Ala., and then Birmingham International Raceway. But with his heart in dirt racing, he hatched plans to launch a dirt racing series, planning to use visits from friends like NASCAR legends Bobby Allison and Red Farmer to headline races.

"The top names from five or six different racetracks would show up, like all stars," Parker said in a 2004 interview, "and that's where I came up with the name Southern All Stars."

It wasn't smooth sailing from the beginning in 1983 as the series hosted 13 dirt races in four states with winners like Chick Boyd, Buddy Morris, Purvis, Inmon and Hester, the inaugural series champion.

There were occasional "make-you-sick terrible races" with financial struggles and such small crowds that "we might as well have introduced the fans to the drivers," Parker recalled.

"It was rough getting started. We had to go out and rent racetracks. I don't know how many times, me and my wife (Gail) would be driving home, we'd just say, 'We're going to quit. One more and we're going to quit.' ... We've laughed a lot and cried a lot."

In the early years, the Parkers traveled from track to track in a '65 Cadillac, using track employees to help run the events and "rolling the dice myself" in an occupation that didn't always provide a steady paycheck, as Gail Parker often reminded her husband.

"Back then when we were going to the races, we'd go somewhere and lose money, and she'd go home with her bottom lip stuck out. 'You oughta get a job like normal people. We live like gypsies. We don't never know when we're going to get a steady payday, blah, blah, blah all the way home.' You'd go somewhere a week or two later and make a couple or $3,000, she'd be sitting over there with the (money) pouch in her lap saying, 'Where do we go next?' "

"It ain't always been good," Parker says his wife sometimes reminded him. "But it ain't been dull."

"I started out about as broke as a fellow can get broke," added Parker, who nevertheless always made sure he could cover the race purses. "I kept my house title clear so I could go mortgage it if I needed to, but I never had to. I got by by just a hair a lot of times."

The Southern All Stars eventually gained its footing, and after hosting asphalt races for dirt cars, Parker added the Southern All Star Asphalt Racing Series. The dirt series went through associations with the Hav-A-Tampa Dirt Racing Series before that organization grew into a national tour, as well as Watson's SUPR tour as SAS races ebbed and flowed to tracks throughout Alabama, Mississippi, Georgia, Tennessee and beyond.

The Southern All Stars sanctioned a series-high 41 races in 1993, but scaled back to a tighter regional focus in the ensuing years while also adding a satellite Southern All Star Bandits tour for drivers with limited powerplants.

In the early '90s Parker "got away a little bit from the local scene, but the traveling and everything was such a rigorous deal from week to week, in talking to him, he was kind of glad to get out of that and get more like in the local area where he'd worked so tirelessly for so many years," Watson said.

The Southern All Star continued to flourish, Watson said, because of Parker's philosophy that regional tours required balanced purses that "had to do to keep the racetrack in business and keep the racer surviving too. ... That was always one of B.J.'s concerns."

Parker's promotional abilities kept the series stable while dozens of other tours came and went during the same time frame.

"B.J. had been around. He'd been on the asphalt side of the fence and the dirt (side of the) fence. I'll just be honest with you. Even though he was my father-in-law, I don't know anybody who had much more experience in the promotional business. He'd kind of been on every facet of short-track racing," Phillips said. "He was a true Southern gentleman. He knew what it was to struggle to race, because he did it himself. But B.J., he had a personality. Oh Lord, he was a story-teller from the old days of racing, but he respected people, he respected the racers, he respected the fans. He knew what the sport was about, and he knew what life was about.

"He told me often, you know, that it was better to make friends than it was enemies. He didn't exactly word it that way, but he was a positive person. I think that's the best way you can put it. He was always positive, always had a smile and a pat on the back. And I think the racers really respected that."

Parker said he always made sure not to hold grudges in a sport where feathers get ruffled regularly. And when a driver began to give Parker an earful in a heated disagreement, "I'll forgive 'em before they ever say it," he said.

Clint Smith, whose Southern All Star titles came in '92-'93 as well as 2000 and '03, said Parker's tour helped him launch a career that's led to touring nationally with the World of Outlaws Late Model Series.

"I won four championships and that's something that will always mean a lot to me," Smith said. "I supported them as much as anybody over the years and actually still do even after B.J. sold it. It's a good series. It's one of the longest running series in dirt racing and I believe that's all because of the hard work B.J. put into it."

Parker was influential among other regional promoters, including Mike Vaughn of the NeSmith Chevrolet Dirt Late Model Series for Crate Late Models.

“He was old school and I picked up a lot from him just like everybody did. He was really a fixture in not just dirt track racing, but short track racing in general. When B.J. got started, Bob Harmon was also big in it and I put them two on the same level. They’ll always be the pioneers and the two that really set the standard for promoters," Vaughn said. “He was just a pleasure to be around and he’s gonna be sorely missed. I don’t know if a lot of people realize just how much of an impact B.J. had. He never looked for limelight, he just enjoyed racing and loved to see a good race as much as anybody. Not only was he a promoter, but he was also a big fan.”

Charles Roberts, who along with David Miller purchased the Southern All Star tour and still operates the series, called Parker "a pioneer in establishing and operating a racing series and one of the best men in the sport. I would say that he was truly one of the fairest promoters. He had a wonderful personality and a great sense of humor, but he was also stern. He treated everybody the same without any favoritism. It was the same rules for everybody."

"I'm really proud of the series," Parker said in 2004. "Any time you start something and nurse it along, you're proud of it when it does good. ..."

"When you get as old as I am, you start thinking about after you're gone, what kind of reputation you've left. That's really about all a person's got when he leaves here, is reputation."

Besides his wife Gail, Parker is survived by a daughter, Jenny Phillips; he was preceded in death by a son, Michael.