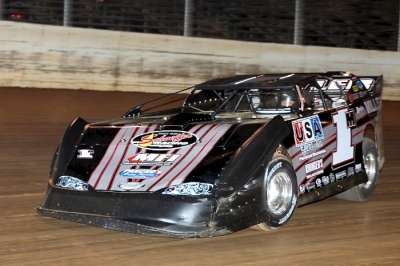 HAGERSTOWN, Md. (April 2) — For the first time since August 2009, it was Miller Time during Saturday evening’s brisk opening event at Hagerstown Speedway.

“If you’re the leader and it’s happened to me before, you have all the wrong places to go,” said Miller, whose 28th career victory at Hagerstown puts him in a tie for ninth on the all-time list. “You have everything to lose and the guy in second has everything to gain and that’s what happened here. Josh is definitely one of the best. Even when I was out there running second, I wanted to beat him, but if I’d finished second to him, that would have been an awesome run for us.”

With a heads-up start, Richards sped into the first turn but Miller stayed with him as they immediately pulled away from Alan Sagi and began closing in on slower cars by the seventh circuit. Richards had lapped one car before the yellow was displayed and on the restart, Miller didn’t let him escape as they again opened nearly a three-second margin over Sagi, Jerry Bard and Tyler Hershey.

Following a lap-15 yellow, Miller remained on Richards’s rear bumper as they closed on the rear of the field on the 23rd circuit, and Richards slipped by the first with several looming ahead. When Richards picked the low groove entering turn three, Miller seized the opportunity to head around the outside and take command.

“I want to dedicate this to Mom,” Miller said. “She’s had some rough times over the winter but looks great now. We’re hoping for the best for her and also my wife Julie. We found out a couple months ago she’s expecting.”

Richards took the runner-up position with Sagi, Bard and Roy Deese Jr., who finished fifth after getting past Hershey with three to go.

Notes: Miller's MasterSbilt Race Car is sponsored by USA Spares Precision Machining, Miller Fabrication and Schaeffer Racing Oil. ... “I put more effort into this car than probably when I built my street stocks,” Miller said of his brand new race car. “It was a lot of hard work. There isn’t a piece on this thing that I didn’t have a hand in.” ... Pete Weaver won the Late Model Sportsman feature, leading all but one lap. ... Hagerstown returns with regular programs April 9 and 16 before a $3,000-to-win Three State Flyers event on April 23.