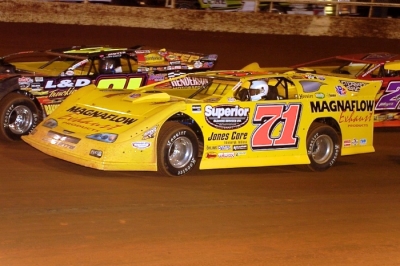 KILGORE, Texas (April 1) — While others struggled to adjust to the recently reconfigured Lone Star Speedway during Friday night’s preliminary action for Saturday night’s $20,000-to-win Lucas Oil Late Model Dirt Series race, two drivers who were competing at the track for the first time had no trouble mastering the 3/8-mile oval. | Slideshow | Sidebar | Notebook

Don O’Neal of Martinsville, Ind., and David Breazeale of Four Corners, Miss., were both dominant in their debuts at the east Texas racetrack, recording the fastest times in their respective qualifying groups and winning their heat races. The two drivers will share the front row for the start of Saturday’s 100-lap feature.

Chris Wall of Springfield, La., was the night’s other heat race winner and will start third in the main event. Rain set in before the start of the fourth and final heat race, postponing the prelim until Saturday evening.

O’Neal’s lap of 15.711 seconds was fast enough to top the first of two groups in Friday’s qualifying, giving him the pole for the first heat race.

O’Neal bested three Batesville, Ark., drivers in the 10-lap prelim. He grabbed the lead over second-starting Billy Moyer on the start, then pulled away from Jared Landers in the closing laps to seal the victory. Moyer finished third with his son Billy Moyer Jr., taking the fourth and final transfer position.

While O’Neal’s dominance was certain Friday night, the veteran driver was anything but certain while discussing his gameplan for Saturday’s feature.

“We’ll see with this rain tonight, who knows what we’ll have tomorrow,” O’Neal said. “Who knows what’s gonna happen on tires tomorrow. (Thursday) night we practiced on a little different tires than we ran in the heat race so who knows. It’s sure nice to be starting up front.”

Breazeale’s lap of 15.358 seconds was the fastest lap recorded in the second qualifying group and the fastest time overall. He cleared second-starting Dale McDowell of Chickamauga, Ga., on the start of the third heat race, but gave McDowell the lead when he bobbled in turn one after hitting a rough spot on the racing surface.

But Breazeale battled back and was in position to reclaim the point one lap later when McDowell hit the same rough area. Breazeale then raced to the victory while McDowell held off Scott Bloomquist of Mooresburg, Tenn., for second. Fifth-starting Jimmy Owens of Newport, Tenn., finished fourth.

Breazeale, who has never won a Lucas Oil Series event, was happy with his performance against three drivers he considers to be among the sport’s best.

“They’re the best in the business,” Breazeale said of his heat race challengers. “I knew there was a hole down there. I was just trying to get through it and (McDowell) rolled me on the top. The next lap he just caught the rut wrong and I was there close enough to take advantage of it. Then I just tried not to hit the hole again.”

Wall was also impressive in his heat race, leading every lap and pulling to nearly a straightaway advantage by the finish.

Rookie of the Year contenders Bub McCool of Vicksburg, Miss., and Frank Heckenast Jr., of Frankfort, Ill., battled for second for nearly the entire race, with McCool holding the position at the finish. Tim Isenberg of Marshfield, Wis., passed Dennis Erb Jr. of Carpentersville, Ill., midway through the race to claim the final transfer position.

Notes: The event is the first visit by the Lucas Oil Late Model Dirt Series to the state of Texas. ... The event is also the first Late Model race at Lone Star since the track was shortened from a half-mile to a 3/8-mile over the offseason. ... The three heat races produced a total of five cautions and one red flag. ... Leon Henderson of Laurel, Miss., took a wild ride in the second heat race to bring out the night’s only red flag. Contact from another car sent Henderson into the wall then end-over-end. He was uninjured, but his race car suffered major damage. ... Billy Moyer got into turn one too hard on the first attempt to start the first heat race. He slid sideways and started a pileup that collected four other cars. All of the cars continued on for the complete restart except for Wendell Wallace of Batesville, Ark., who went to the pit area with a flat tire. ... Ray Moore of Shreveport, La., was battling with Jimmy Owens for the fourth and final transfer position in the third heat race, but had a left-rear flat on the final lap. He limped to a ninth-place finish. ... Saturday’s action starts at 7 p.m. with the rescheduled fourth heat race kicking off the program.