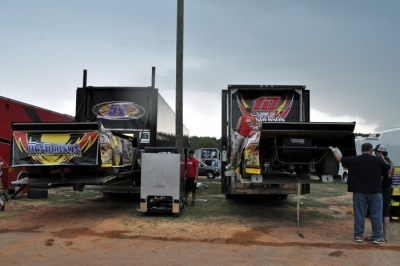 The late March tripleheader weekend for the World of Outlaws Late Model Series got off to a great start last Friday with Darrell Lanigan's victory at Ocala (Fla.) Speedway, but everything went south when the tour headed north to Georgia.

Thunderstorms plagued the series the rest of the weekend, washing out events at Screven Motor Speedway in Sylvania and Needmore Speedway in Norman Park on Saturday and Sunday. Raindates were scheduled for both events.

Screven promoter Redd Griffin reached an agreement with series officials for a Nov. 1 or 2 event. Griffin plans to boost the winner's purse to $12,000, creating a lead-in event for the season-ending World Finals on Nov. 3-5 at the Dirt Track at Charlotte.

The Nov. 2 date is the same evening for which Griffin previously rescheduled his Winter Freeze program, a doubleheader featuring Dirt Late Models and the O’Reilly All-Star Circuit of Champions sprint cars rained out last month. Griffin will reset the event to Nov. 1, however, if wet weather would force the World of Outlaws Showdown on Oct. 12 at Charlotte to be postponed to Nov. 2 in conjunction with the World Finals.

At Needmore, series director Tim Christman and track owner Chris Hunnicutt agreed to reschedule the 40-lap, $8,000-to-win event for Sunday, May 8. The race will cap a tripleheader weekend in the Southeast that includes events at Fayetteville (N.C.) Motor Speedway on May 6 and Swainsboro (Ga.) Raceway on May 7.

The World of Outlaws drew more than 30 teams to Screven, and 26 Late Models were signed in at Needmore for the first-ever series event. — Kevin Kovac

FIVE DRIVERS DECLARE FOR MLRA ROOKIE HONORS: Five drivers, including a pair of teammates, have announced plans to chase rookie honors on the Lucas Oil Midwest LateModel Racing Association in 2011. Joe Walkenhorst of Lee's Summit, Mo.; Billy Koons Jr. of Omaha, Neb.; Dustin Reeh of Missouri Valley, Iowa; and teammates Dustin Walker of Peculiar, Mo., and Jason Pursley of Wheatland, Mo., are vying for the title. Walkenhorst drives a Rick Darling-powered Swartz Race Car and has raced for 10 years, including several ULMA events. Koons, 19, is running his first full season in Super Late Models along with his father Bill, an MLRA regular. Walker is another graduate of ULMA racing and will chase MLRA action along with Pursley, a modified ace making his Late Model debut. Reeh has driven Late Models since 2008 and pilots his Swartz chassis at I-80 Speedway in Greenwood, Neb., where the series opens April 2. — RacinDirt.com

PRO TOUR ESTABLISHES ROOKIE OF YEAR PROGRAM: The second-year Promoters Racing Organization Dirt Car Series has established a Rookie of the Year program with sponsorship from Jeff Burns Racing Engines. The Tupelo, Miss.-based engine builder will pay $500 to the top series rookie. A rookie's best 10 series finishes will count in the rookie points. To be eligible, drivers cannot have ever won a PRO event, finished in the top five in last year's series points, or won any race paying more than $2,500. Rookies must declare their intent to run for the title within the first three series races. The season opens April 29 at North Alabama Speedway in Tuscumbia. For more information call series director Mike Mauldin at (662) 213-3047. — Ben Shelton

WAYCROSS PLANS 2012 SPEEDWEEKS EVENTS: Announced soon after the closing of Golden Isles Speedway near Brunswick, Ga., Waycross (Ga.) Motor Speedway has tentatively scheduled a pair of $10,000-to-win Super Late Model events for Feb. 10-11, 2012, the weekend before Florida Speedweeks begins at East Bay. Golden Isles, recently put up for sale by track owner Frankie Lloyd, has previously hosted Super Late Model events for drivers en route to Florida. The dates, often in January in earlier years, are earlier than usual because NASCAR scheduled next year's Daytona 500 a week later than usual on Feb. 26, and it's expected the Dirt Late Model portions of Speedweeks will be pushed back a week, too. — From staff reports

SERIES SCHEDULE CHANGES AND ADDITIONS: The Southern All Star Dirt Racing Series has added a Sept. 3 event at Needmore Speedway in Norman Park, Ga.; removed from the schedule as an April 2 event at Lavonia (Ga.) Speedway. ... The Mississippi State Championship Challenge Series has shifted a Hattiesburg Motorsports Park back one day to May 28. ... The O'Reilly SUPR event at Jones Motor Speedway in Chatham, La., has been pushed back a week to June 11. ... Among several schedule changes, the Show-Me Racin' Series has added five dates at Tri-State Speedway in Pocala, Okla.: April 23, June 18, Aug. 6, Sept. 3 and Sept. 10. ... The first-year STARS Midwest Dirt Racing League announced its Buckeye Classic at Rocky Top Raceway will pay $10,000 to the winner on July 4. ... Ponderosa Speedway in Junction City, Kan., has canceled its MDRL and Volunteer Racing Series events.

ODDS AND ENDS: While there was conjecture that, with Steve Francis departing the World of Outlaws Late Model Series, that the tour would lose its April 30 date at the track operated by the driver's in-laws, the series says the event at Bluegrass Speedway in Bardstown, Ky., remains firmly on the schedule. ... Eric Turner plans to make part-time starts this season in the Late Model division this season in a car owned by fellow Springfield, Mo., driver Patrick Johnson; his first start is scheduled for April 9 at Lucas Oil Speedway in Wheatland, Mo. ... Red Cedar Speedway in Menomonie, Wis., announced its Sept. 23-24 Punky Manor Challenge of Champions will consist of two complete race programs.