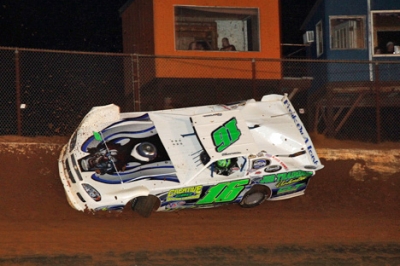 Brian Nuttall Jr. got into the wall in Friday's hot laps. (Scott Oglesby)

Forty-nine drivers from 17 states signed in for the qualifying program, which provided fans a scintillating taste of the action expected in Saturday night’s extra-distance headliner.

Richards, 23, was responsible for the first burst of heat-race excitement. The two-time defending series champion recovered from a subpar time-trial performance to win the first preliminary from the fifth starting spot — a charge he completed by overtaking both Chris Wall of Holden, La., who began the night by earning his first career WoO fast-time honor with a lap of 13.581 seconds, and Dan Schlieper of Sullivan, Wis., on a lap-six restart.

“We didn’t really show it with our starting spot in the heat, but we had an awesome car,” said Richards, who managed only the 17th-fastest lap. “We picked the right tires, were able to make the right moves at the right time and get up through there. I’m just looking forward to 100 laps tomorrow.”

Hubbard, 19, dominated the second heat race, surging off the pole position to lead the entire distance. He pulled away from Steve Francis of Ashland, Ky., following a late restart to triumph in his first-ever appearance at Columbus.

“We had a good car since we came out of the box here (during Thursday's practice),” Hubbard said of his Dale Beitler-owned Rocket car. “In the heat I just tried to hit my marks and not burn my tires up and we got a win. Now we need to get a good redraw tomorrow, make a good tire decision and have a good run.”

Marlar and Moyer — both former winners of the lucrative Magnolia State 100 at Columbus — closed the evening with victories. Marlar raced off the outside pole and outdueled Jason Feger of Bloomington, Ill., to win the third heat while Moyer captured the fourth prelim from the fifth starting spot.

The heat winners and runners-up — Chub Frank of Bear Lake, Pa., Francis, Feger and Will Vaught of Crane, Mo. — will participate in a redraw on Saturday night to determine the first eight starting spots in the Cash Cow 100.

Frank, who did not attend Thursday night’s open practice, might have been the most fortunate of the heat-race qualifiers. His car lost power just as he crossed the finish line due to a busted fuel pump that also blew out the machine’s power-steering pump.

Scott Bloomquist of Mooresburg, Tenn., finished third in the fourth heat, giving him the 12th starting spot in the Cash Cow 100. He enters the weekend shooting for three consecutive WoO victories after sweeping the tour’s season-opening events at last month’s DIRTcar Nationals by UNOH at Volusia Speedway Park in Barberville, Fla.

The Cash Cow 100 weekend concludes on Saturday with consolation races and the 100-lapper. Grandstand gates open at 3 p.m. for advance ticket-holders and 3:15 p.m. for all other fans, and action is set to get underway at 7 p.m.