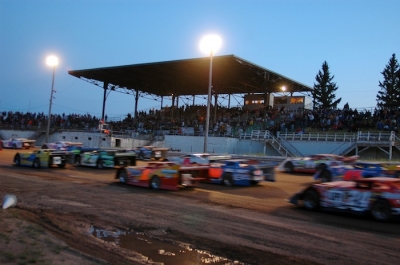 Hibbing Raceway is undergoing a facelift, including a widening of turn three, before its richest race. (chrisburback.com)

The inaugural Fortune Bay Resort Casino Governor’s Cup will pay the largest winner’s share of any WISSOTA Late Model event in 2011 and will mark the richest payout in the history of the 3/8-mile racetrack located in the northeast corner of Minnesota.

The scheduling of the event comes after an entirely new group of officials were elected in November to the Iron Range Racing Association, which manages the speedway.

Ryan Aho, the new head of the Hibbing Raceway Marketing and Promotions Committee, said that the new management team hopes the major race will not only benefit Hibbing Speedway, but also the entire WISSOTA racing community.

“Everyone involved here at Hibbing Raceway is really excited to host this event,” Aho said. “WISSOTA Late Models need an event like this. Teams put a lot of money into their race cars and they deserve big-money races to compete at. We’re looking forward to a great race that’s hopefully going to be great for the racers, great for Late Model fans and great for our entire racing community.”

The format for the event will include heat races and a preliminary feature race Friday night, with the race’s top 12 finishers advancing directly to Saturday night’s 100-lap main event.

While they Governor’s Cup is not a Challenge Series event, Aho hopes that three lead-in races, combined with a slim schedule of other big races on that weekend, will help attract a large field of cars to Hibbing.

“This is really shaping up to be a huge week for WISSOTA racing,” Aho said. “It should be a great weekend to host the race, and with the Challenge races we feel confident there will be somewhere in the neighborhood of at least 60 Late Models.”

Defending Hibbing Late Model champ and hometown driver Kyle Peterlin was excited to hear the news of the first-year race, and he’s looking forward to competing for $10,000 at his home track.

“It should be a great show.” Provinzino said. “It’s nice to be able to race for that kind of money close to home. Hibbing is a great track. There should be a ton of cars there and hopefully it’ll be a good race.”

The racetrack and its surrounding facilities will undergo some improvements prior to the inaugural event, as Aho and the new management group work to improve not only the track racing surface, but also its esthetic appearance.

“The surface has gotten pretty used up,” Aho said. “We’re getting it resurfaced and widening out turn three. We’re also working on a lot of other improvements to the facility and just giving the track a major facelift.

“We’re hoping to make this an annual race, and make it bigger and better each year,” he continued. “We’re really excited to get going with our first year here and we’re glad to be able to host a major race.”