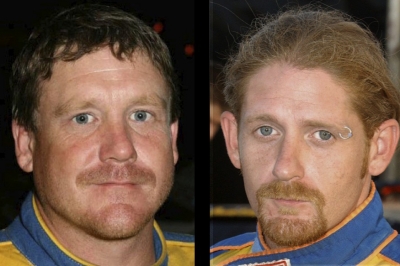 Some of the nation’s biggest Dirt Late Model stars are coming to Rick and Brian Rickman’s hometown this weekend for the inaugural World of Outlaws Late Model Series Cash Cow 100 at Columbus Speedway. Are the Columbus, Miss., born-and-bred racers ready to defend their turf on March 18-19? Sure sounds like it. | Cash Cow 100 preview

“The best of the best will be there this weekend,” said Brian Rickman, at 34 the younger of the racing siblings. “It’s gonna be tough just to get in (the 100-lapper), but we’re gonna give it our best shot. We jump off in there with both feet. We’re not scared.”

“A race like this always gives us a little more of a challenge because a lot of the (invading) guys do it for a living and we’re what you call Weekend Warriors,” added the 39-year-old Rick Rickman, the brother with the most Dirt Late Model experience. “But we always tend to run pretty well with ‘em when they come in here, so I feel like we got a good shot at it.”

The Rickmans represent the best hope for the local fans to witness a storybook performance in the Cash Cow 100, which is not only the richest Dirt Late Model event in the country this month but also serves as the season opener at Columbus. Time trials and qualifying heats will be contested on Friday night while consolation races and the $20,000-to-win feature headline Saturday's program.

While Brian Rickman will be making his first career WoO start this weekend, Rick Rickman has tested himself against the national tour’s stars in the past. A five-time Columbus Dirt Late Model champion with over 75 career wins at the track spread over several divisions, Rick entered the two previous World of Outlaws events held at Columbus, finishing eighth (after starting 24th) in a 50-lapper in August 2006 and failing to qualify for the March 2007 event.

As a veteran beginning his 25th season behind the wheel, Rick Rickman is considered a driver to watch by all the outsiders who will fill the Columbus pit area for the Cash Cow 100 — a star-studded roster led by former WoO champions Josh Richards of Shinnston, W.Va., Billy Moyer of Batesville, Ark., Darrell Lanigan of Union, Ky., Steve Francis of Ashland, Ky., and Tim McCreadie of Watertown, N.Y. Rickman is hoping his experience at the one-third-mile, high-banked oval will allow him to live up to the expectations.

“We’ve been around a while, so I’m gonna say we have at least a little bit of a hometown advantage,” said Rick, who won points titles last year at both Columbus and its sister track across town, Magnolia Motor Speedway. “We know the place, know it’s physically and mentally demanding because it’s so fast. It’s pretty draining because you’re on the edge all the time, just inches off the wall the whole time. You’re right up against the wall, against the cushion. Normally if you’re not up there, you’re not gonna be that fast.”

But Rick, who works alongside his sibling at Rickman Brothers Trucking in Columbus, certainly isn’t overconfident: “We only really ran (at Columbus) but eight times last year, so we don’t have quite the edge we maybe used to have when we ran every week. And those (touring) guys that are coming in race at so many different tracks, they always have notes from someplace to compare to this one.”

Brian Rickman, meanwhile, understands the challenge ahead of him. He’s coming off one of the strongest seasons of his Dirt Late Model career (he’s spent about 15 of his 21 racing years in the full-fender class) and feels he has the equipment to contend, but he’ll have to run the race of his life to be in the mix for the big check.

“The biggest thing that hurts us is that (the traveling professionals) already got 500 laps under their belts and we ain’t even started yet this year,” said Brian, noting that the WoO regulars and several other high-profile Cash Cow 100 entrants kicked off their seasons last month in Florida. “They’re already ahead of the ballgame and we ain’t even fired ‘em up yet. But being local, we’ll have about as good a shot as anybody here.

“If you get in the race, run up near the front and stay out of trouble, you never know what can happen at the end. We just need that lucky dog on us.”

Brian, who will drive a MasterSbilt No. 7 car owned by Johnny Glasgow of Vernon, Ala., because his new family-owned machine isn’t yet ready, admits that he’s dreamed ever-so-slightly about standing in victory lane at his home track after the Cash Cow 100.

“Winning $20,000 here in your hometown — man, you don’t want to think about it because you don’t want to jinx yourself, but you can’t help it,” said Brian, who has never won a race worth more than $5,000. “It would be awesome to win it. We’d definitely have a big party.”

Rick is equally starry-eyed about the prospect of capturing Saturday night’s WoO blockbuster. With his own new car also not ready for action, he will chase the checkered flag driving the family-owned MasterSbilt No. 68 that his semi-retired father, Eddie, will race in a limited number of local events this season.

“It would mean so much to win a big one here at home, especially because our sponsors are local,” said Rick, whose team’s Columbus-based backers include Advanced Logistics, J&J Tobacco Store and the 1250 Package Store. “Our whole family will be there too — our mom and dad, our wives, our kids, our crews’ families. We usually camp the whole weekend at the track when there’s a big race, so if we could win it we’ll be having fun at the camper after it’s over.”

Win or lose, proudly overseeing the Rickman clan throughout the weekend will be Eddie Rickman, the 60-year-old patriarch of one of the Southeast’s most well-known racing families. Eddie was the quickest qualifier for the last WoO event at Columbus four years ago — and, at the age of 56, setting a still-standing record for the oldest driver to earn a fast-time award on the tour — but he doesn’t plan to compete this weekend.

“He’s been racing since ’68 and I guess he’s kind of burnt out to do it all the time,” Brian Rickman said of his father. “He’d rather sit up in the stands and tell us what we’re doing wrong.”

General admission tickets for the March 18-19 Cash Cow 100 weekend can be purchased online at www.worldofoutlaws.com/tickets or by calling the event hotline at (877) 395-8606. Fans who buy a two-day weekend pass in advance will receive special perks, including a discounted price and the opportunity to enter the grandstand area 15 minutes prior to the general front-gate opening time for a show that is expected to pack the track’s grandstand.

• Pit passes will be sold only at the track for $30 on Friday, $35 on Saturday and $60 for a two-day pass. DIRTcar members will receive a $5 discount on pit admission.