Richards back at Columbus, site of memorable '06 victory 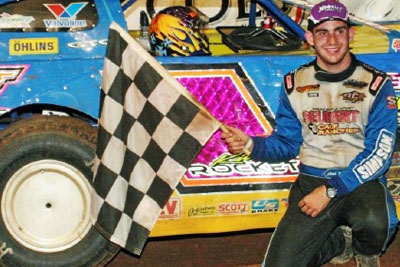 Josh Richards celebrates after a World of Outlaws victory at Columbus (Miss.) Speedway in 2006. (Tim Henry)

Columbus Speedway might be more than 750 miles from Josh Richards’s home in Shinnston, W.Va., but the Mississippi track will always hold a prominent place on his ever-growing career resume. It was, after all, at the intense high-banked, third-mile oval where Richards took a major step toward his current superstar status as the two-time defending World of Outlaws Late Model Series champion.

When Richards leads the WoO contingent to Columbus Speedway on March 18-19 for the inaugural $20,000-to-win Cash Cow 100 weekend, the soon-to-be 23-year-old sensation will undoubtedly think back to the very memorable night he spent at the track nearly five years ago.

On Aug. 26, 2006, Richards won the first-ever WoO event contested at Columbus. Then a rising 18-year-old talent fresh out of high school and in his second full season as a regular on the national tour, he pulled off a dramatic late-race pass of eventual ’06 series champion Tim McCreadie of Watertown, N.Y., to earn the second WoO triumph of his budding career.

“I remember that race well,” said Richards, who celebrates his 23rd birthday March 22. “We won our heat and the dash and led until McCreadie passed us. I had to pass him back and finally got by him with a few laps to go.

“Back at that stage of my career, that was a huge accomplishment for me. To pass a guy like McCreadie for the lead right at the end of the race — man, that was cool.”

The win at Columbus was the second in the first 93 starts of Richards’s WoO career, which he launched in 2004 by running a partial schedule in his father Mark’s Rocket Chassis house car before going full time in ’05 and capturing the Rookie of the Year award. Since then he’s won 26 races in 177 starts, a veritable checkered-flag explosion on the competitive circuit that has him tied with Steve Francis of Ashland, Ky., atop the tour’s win list since 2004, at 28 victories.

The 2006 Columbus show will forever stand as a turning point for Richards, who proved that he had the ability to snatch victory from the throes of defeat. His first career WoO victory on Aug. 15, 2005, at Lebanon Valley Speedway in West Lebanon, N.Y., came after two drivers in front of him experienced mechanical trouble. At Columbus, he pulled his seatbelts tight and rallied to steal a victory from one of the division’s biggest names.

Richards led the first 32 laps before McCreadie slid under him to assume command. But after a caution flag on lap 46 provided a final opportunity, Richards heeded the signals of his father Mark, who was watching the race from the track’s infield, and used the inside groove to regain the lead from McCreadie heading into turn three with two laps remaining.

“The track was kind of rough on the bottom that night,” recalled Mark Richards, 50. “Josh had actually run through the holes for a while, but then he moved out of them and McCreadie caught up and got by him. Josh just got back up on the wheel, went through the holes and passed him back late in the race for the win.

“That was probably one of Josh’s first lessons in how aggressive you need to be to get the win,” Mark continued. “I’m sure that race showed him that if you want to win, you gotta get up on the wheel and drive a little harder to get it done. That’s been more or less his trademark throughout the last few years — when he has to be aggressive, he’s aggressive.”

Indeed, the younger Richards saw his future come into focus at Columbus. After breaking through with a hard-fought triumph, he went from a ninth-place finish in the 2006 points standings to sixth in 2007, second in 2008 and first in both 2009 and 2010, becoming the first driver in the modern era of the series to win the title twice.

“We kind of struggled from the beginning to the middle of ’06, but towards the end of the year we kind of picked up our program,” said Richards. “Our program had started to get on track, we were racing better together as a team everywhere we went and everything clicked that night (at Columbus). It’s a fast little bullring and I guess it just kind of fit my style. I’ve always liked places where you have to get up on the wheel and run hard.

“It definitely made me realize how hard you have to drive to win,” he continued, analyzing his performance at the Baddest Bullring in the South. “Everybody that you race with is so tough and they’re all gonna give a 110 percent, so you just gotta be that person who goes a little harder.”

Richards is hopeful he can convert that extra desire into a big victory in the Cash Cow 100, a blockbuster two-day program that brings Richards and the series back to Columbus for the first time since March 2007. He captured the long-awaited first 100-lap win of his career last year at Mohawk International Raceway in Akwesasne, N.Y., and he’s ready to chase another at a furious, high-speed track that will present a supreme test to man and machine.

“I think it’s gonna be a real tough race,” said Richards, who struggled to a 15th-place finish in his last WoO start at Columbus, on March 24, 2007. “If the racing is like it was when we were there before, the racing is gonna be so hard it’s gonna be hard to manage your tires and your equipment for 100 laps — especially if it’s got some traction to it.

“Somehow we’re gonna have to get a gameplan together where we can save our stuff a little. Hopefully that begins with starting up front. With the caliber of the guys that will be out there, if you start back in the pack you’ll have to race so hard early in the race just trying to move up. You might get yourself up to be in position to challenge the last 20 or 30 laps of the race, but by then your stuff is already wore out.

“I guess the key would be to get a good starting spot so we’ll be able to manage our equipment and have something left for the end.”