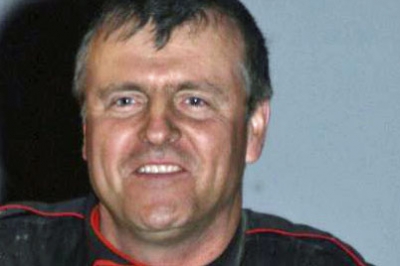 Why has Ron Davies tossed his helmet in the ring as a challenger for this year’s World of Outlaws Late Model Series Rookie of the Year award — at the ripe age of 53? Pose that question to the veteran driver from Warren, Pa., and he’ll fire back with a simple answer.

“I just want to go do it one time because I really like racing with the professional guys,” the personable Davies said of his ambitious plans to criss-cross the country this season as a WoO regular. “Not that I’m a professional, but I like racing with them because your stuff doesn’t get torn up every night, they race hard and it’s good competition.

“I know I’ve only got a few years left because I don’t want to race until I’m 60, so as long as I feel I’m still competitive and I still love to race, why not do it? I couldn’t (travel) the way I wanted to back when I was younger, but I can now so I’m gonna do it.”

Financially secure with a solid self-owned business, equipped with top-notch racing equipment and just two-and-a-half-year years removed from surviving a bout with prostate cancer, Davies figures it’s now-or-never for him to hit the road with the Outlaws. He even has the opportunity to roll down the highways with his future son-in-law Shane Clanton, the WoO star from Fayetteville, Ga., who proposed to Davies’s soon-to-be 23-year-old daughter, Michelle, last year.

Davies is, for all intents and purposes, seizing the moment, an attitude instilled deeper in him when prostate cancer sidelined him for a portion of the 2008 season.

“When you go through that, it makes you think, If you can do something, go do it,” reasoned Davies, who successfully underwent treatment and is now cancer-free.

Davies is one of four drivers listed as a 2011 WoO Rookie of the Year contender, joining Pat Doar, 47, of New Richmond, Wis.; John Lobb, 41, of Frewsburg, N.Y.; and Brian Reese, 29, of Sharpsburg, Ga. The next race for the quartet — along with the national tour’s star-studded roster of regulars — is the $20,000-to-win Cash Cow 100 extravaganza scheduled for March 18-19 at Columbus (Miss.) Speedway.

None of the first-year travelers have been racing longer than Davies, who launched his career behind the wheel in 1976 in the spectator class at sister tracks Eriez Speedway in Hammett, Pa., and Stateline Speedway in Busti, N.Y. He moved to the Limited Late Model division the following season and then made his full-blown dirt Late Model debut in 1978. He’s been a Dirt Late Model stalwart ever since, focusing his efforts primarily on the tracks around his western Pennsylvania home.

During his career Davies has accumulated a feature-win total well into triple-figures and earned distinction as one of his area’s most popular drivers (he’s known as the Rim Rider for his cushion-pounding style), but the only time he tested his talent on a touring series was in 1989 when he followed the STARS circuit and won a single feature at Eriez. He has never attempted a national tour nor entered more than a handful of Dirt Late Model racing’s crown-jewel events.

For most of the past two decades, Davies’s focus has been business first, racing second. In 1992 he founded WeldBank Energy, an oil- and gas-producing firm based in his hometown through which he owns and drills wells and leases 1,500 acres of property to companies in the industry. While he’s kept WeldBank small — he has only three employees including his 79-year-old uncle, who does all of Davies’s pumping — it’s been very successful. The nature of the business also allows him to shut down for spells to go racing and still maintain income with the operation of gas compressors, gas sales and land leases.

Davies will certainly take some time off this year for his WoO excursions. With former Chub Frank mechanic Brandon Bilskie serving as his full-time wrench-twister, Davies has two Bullock-powered MB2 Custom cars built by Jimmy and Chris Mars ready for a World of Outlaws schedule that will see him visit more than two dozen tracks for the first time.

“I’m excited,” said Davies, who returned to the seat of his own machines last year after running locally for a car owner in 2009. “We definitely want to win the rookie deal, but beyond that our goal is to be competitive and to try to run in the top 10 every night. And hopefully, when we get back around home to tracks we know, we’ll have a good shot to win a World of Outlaws race. We almost won one last year.”

Indeed, Davies enjoyed a superb WoO outing Aug. 1, finishing second to tour champion Josh Richards of Shinnston, W.Va., in a 50-lapper at Eriez. He also set fast time and won a heat race that evening, putting him oh-so-close to a rare clean sweep of an Outlaw program. The runner-up finish at Eriez was Davies’s best in eight career WoO starts since 2004.

Davies didn’t get his 2011 WoO assault off to an uplifting start during last month’s DIRTcar Nationals by UNOH at Volusia Speedway Park in Barberville, Fla., failing to qualify for the tour’s pair of season-opening events. But he showed he can compete with the nation’s top talents with a strong ninth-place finish in a DIRTcar UMP Late Model feature at Volusia, giving him confidence for the battles to come.

“As long as I can run wheel-to-wheel with all the professional guys, I’ll be happy,” said Davies, whose 26-year-old son, Dan, has been driving modifieds the last three seasons. “This is kind of a different experience for me because I’m not making my living at this. I have still that competitiveness, but this is fun for me. I still get a little queasy before qualifying every night, if you know what I mean.”