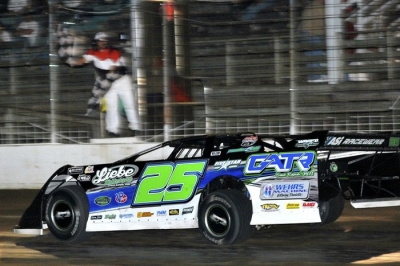 For the past two seasons, the Dart Corn Belt Clash has attempted to drive a fine line.

Full-fledged Super Late Models were restricted by carrying extra weight and using limited carburetors, while cars with less powerful engines got weight allowances and aerodynamic enhancements to even the playing field.

It was an imperfect solution for drivers, series director Cam Granger said, and some "fans didn't understand how come the cars looked different." During the off-season, Granger decided the series needed to sharpen its focus and decided to recast the series primarily for Super Late Models.

It was a decision based partly on the 2010 demise of the World Dirt Racing League and the recent transition of three Simmons Promotions-managed tracks in eastern Iowa to IMCA's spec-engine Late Models from open-competition cars.

"The guys that did run the WDRL, they missed it bad," Granger said, including last year's Corn Belt Clash champion and nine-race winner Chad Simpson, a two-time WDRL champion. "We're trying to get it back to (an) open series. There's a void that WDRL left, and we're going to try and make it work."

In series rule changes for 2011, Super Late Models run standard 2,300-pound cars with open carburetors, and it's clear that's the combination to beat. WISSOTA-legal cars get a weight break (plus the bonus of a pound-per-lap fuel burnoff) and IMCA-legal cars can run without any weight rules, but neither of the lesser-powered combinations will gain advantages from taller spoilers, extra body panels or running roofless, something spec-engine drivers were allowed last season.

"We need to go open, and that's what we're going to do, good, bad or otherwise," said Granger, adding that IMCA drivers already enjoy the successful Deery Brothers Summer Series, which runs its 25th season with its richest purses ever. "I really think it's a good move."

Whether the Corn Belt Clash can replace WDRL remains to be seen, but the tour did inherit one of WDRL's prime spots on the calendar with the $5,000-to-win race preceding Cedar Lake (Wis.) Speedway's USA Nationals, a $50,000-to-win World of Outlaws Late Model Series the first weekend in August.

Otherwise most purses fall shy of the WDRL's standard $5,000-to-win purse, but Granger aims to beef up purses. He hasn't officially released the 2011 purse, but knows that $2,000-to-win purses won't cut it for the long term. "We've gotta start somewhere," he said.

Simpson, his younger brother Chris, Jason Utter and Andrew McKay will be among likely open-competition drivers to run with the series along with brothers Dave and Denny Eckrich, Brian Harris, Jake Meier and more. Second-year driver Kevin Sather ran a spec-engine car last season but plans to field an open-competition engine, Granger said, and other regulars he expects include Eric Pember, Mark Burgtorf and Justin Kay.

Having a successful outlet for regional Super Late Model drivers is important in Iowa, where national tours make sporadic visits. "If we want to see open Late Models," Granger said, "we've gotta have something in this area." — Todd Turner

LUCAS OIL SERIES RELEASES 2011 TV SCHEDULE: The Lucas Oil Late Model Dirt Series has released a schedule of its 2011 television air dates that start March 5. Leading the list of 21 televised events is the 19th annual DART Show-Me 100 from Lucas Oil Speedway in Wheatland, Mo. The $30,000-to-win event will be held May 28 and will be aired on CBS at 4 p.m. June 19. It will be the first-ever Dirt Late Model event aired on a national broadcast network. Also are on the TV schedule are 12 events that will air on Speed. Versus and MavTV will telecast four events events. The complete Lucas Oil TV schedule can be found on the series website. — From series reports

CHANGES PLANNED FOR 2012 BAMA BASH: With the 2011 Bama Bash in the books, Green Valley Speedway officials have already announced changes for next year’s 15th anniversary of the early-season event at the 3/8-mile racetrack in Glencoe, Ala. The race has been scheduled for March 1-3, with feature races being moved to Saturday night instead of Sunday. The race will also be sanctioned by the Promoters Racing Organization Dirt Car Series for the first time, after being sanctioned by the Southern Regional Racing Series for the past two years. — Ben Shelton | Blog

SOUTHERN ALL STARS OPEN WITH DOUBLEHEADER: The Southern All Star Dirt Racing Series kicks off its 29th season with a March 11-12 doubleheader at tracks near Chattanooga, Tenn. The series visits Boyd’s Speedway in Ringgold, Ga., Friday for a $5,000-to-win event that carries the richest purse in the third-mile racetrack’s modern era. The series heads to Cleveland (Tenn.) Speedway for Saturday’s 16th annual Shamrock 60. The Shamrock boasts a total payout of $35,000 with $10,000 going to the winner. Jonathan Davenport of Blairsville, Ga., won last year’s Shamrock feature, earning the winner’s check and the big, green Shamrock trophy. — Brad Byrd

TICKETS ON SALE FOR WoO's ILLINI 100: Tickets are on sale for the World of Outlaws Late Model Series-sanctioned Illini 100 scheduled for April 1-2 at LaSalle (Ill.) Speedway. Reserved and general admission tickets can be purchased online at www.worldofoutlaws.com/tickets. Fans have until March 29 to take advantage of discount prices on two-day and single-day reserved seats for the show that ushers in LaSalle’s 20th season. The Illini 100 shifts to LaSalle in 2011 after three years at Farmer City (Ill.) Raceway. It will mark the first World of Outlaws appearance at LaSalle since 2007. — Kevin Kovac

RICE LAKE SPEEDWAY PLANS HALL OF FAME: Rice Lake (Wis.) Speedway, one of the Midwest's oldest continuously operating racetracks, has announced plans for the creation of a Hall of Fame at the high-banked third-mile oval. A building directly behind the main grandstands at the Dave Adams and Mitch Hansen-owned racetrack will be converted into the permanent Rice Lake Speedway Hall of Fame. A committee of retired and active drivers and other individuals familiar with the history of the track has been formed and is in the process of selecting the first induction class. The committee and Rice Lake Speedway are soliciting old trophies, photos, films and other items that depict the history of the speedway to add to the Hall of Fame. Anyone who has items that they would like to donate should contact Dave Adams at (715) 205-2861. — Ed Reichert

FLORENCE SET TO HOST 35TH ANNUAL SPRING 50: Florence Speedway in Union, Ky., will open its 2011 season March 19 with the 35th annual Spring 50, an unsanctioned event paying $5,000 to the winner. Spring 50 fans will be greeted by the half-mile facility's off-season facelift, including a new 2,800-square-foot building located behind the main grandstand area. The building houses concessions, gate admission, restrooms and speedway offices. A stout field of Super Late Models is expected to be on hand for the annual event; modifieds are also be on the race program. For more info, call (859) 485-7591 or see www.florencespeedway.com. — James Essex

ODDS AND ENDS: Officials at Eldora Speedway in Rossburg, Ohio, are working to finalize details surrounding the 2011 Prelude to the Dream. An update regarding the event will be made March 15 via the track’s website. ... Brian Zachary has been named technical director for the Western Allstars DIRTcar Late Model Series and the UMP DIRTcar modifieds in California. He will also serve as competitor relations for the UMP DIRTcar Pacific Region. A former driver, Zachary worked as technical director at Antioch (Calif.) Speedway for several years, before moving into a chief steward's role. ... Jim Stannard has returned to the IMCA staff as director of track relations. His duties in the newly-created post include visiting IMCA tracks across the country, working with promoters to strengthen currently sanctioned classes and to help add new sanctions.