WoO drivers get ready for challenge that is Columbus 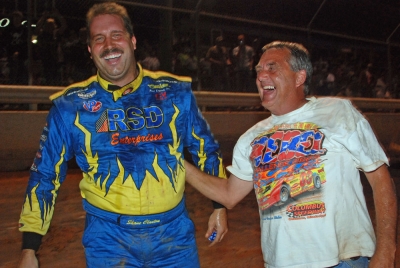 “It’s very wild,” summed up Stokes, a former racer who is beginning his 11th season at the helm of his hometown track. “It’s high-banked, intense, right-rear-up-against-the-wall, sparks-flying, hammer-down racing.”

Clanton, who in recent years has been one of the best big-race performers at Columbus, is even more direct with his appraisal of the speedway. He describes the track’s racing in one word: “Fierce.”

Indeed, Columbus Speedway, a.k.a. the Bullring, has a well-deserved reputation among those in the Dirt Late Model community for producing some of the division’s most fan-pleasing and driver-challenging racing. The competition can be likened to a rolling backyard brawl on a ribbon of Mississippi clay.

“They don’t call it the Baddest Bullring in the South for nothing,” Stokes said with a laugh. “I didn’t give it that name. The fans did.”

That unique, tough-to-tame aura will be on display for two action-packed nights during the Cash Cow 100 weekend, which brings the WoO back to Columbus for the first time since March 2007. Time trials and qualifying heat races are scheduled for March 18, and the consolation races and 100-lapper, which pays a whopping $20,000-to-win, headlines the March 19 program.

Stokes, 57, is the man responsible for creating the track surface that puts Columbus on the map. He takes great pride in his work with blade and water.

“Shane Clanton told me I’m the hardest-working promoter on a racetrack he’s ever seen,” said Stokes, who, at the height of his racing career, won a WoO event July 8, 1988, at Enid (Okla.) Speedway during the tour’s inaugural season organized by late WoO sprint car series founder Ted Johnson. “But hey, you gotta go out there and work on it if you want a good track. I don’t want to see a bad race and neither do the fans and racers, so I’ll be out there from Monday until Saturday (of race week), from dawn to dusk at least, to do everything I can to make sure there’s a good track.”

Combine a meticulously-prepared surface with a high-banked, concrete-shrouded bullring that drivers usually whip around in 13 to 14 seconds, and the ingredients for a memorable extra-distance race are in place. The Cash Cow 100 figures to be an event run on fast-forward, a true test of man and machine.

“One-hundred laps at Columbus is a challenge,” said Stokes, currently the only promoter of a track on the 2011 WoO schedule who has won a tour event. “It’s a very physical, demanding racetrack on a driver, so you better be in good shape to go the distance. A lot of times that really fast groove is right up there against that wall, and that ain’t for everybody.”

The hard-charging style necessary for success at Columbus has clearly been mastered by Clanton. A 35-year-old Outlaw stalwart from Fayetteville, Ga., he’s been the scourge of the track’s prestigious late-season event, the Magnolia State 100, over the last four years, winning it in 2007 and 2009, finishing second in 2010 (with a damaged car) and leading 86 laps of the 2008 edition before a flat tire with six circuits remaining relegated him to an eighth-place finish.

“I guess I just like the racetrack,” said Clanton, who owns finishes of third (2007) and 12th (2006) in the two WoO races that have been contested at Columbus. “The shape of it, the speed, and just the way you gotta stay up on the wheel for the whole race. I guess it just fits my driving style.

“I like the little bullrings everywhere we go. They just seem to fit me better than the big tracks. The smaller the racetrack, the tighter the corners, the more demanding the racetrack. ... the better I seem to run.”

Clanton, who plans to enter his new Marshall Green-built Capital Race Cars machine in the Cash Cow 100 after making some front-end geometry changes to it following its abbreviated debut during last month’s DIRTcar Nationals by UNOH at Florida’s Volusia Speedway Park, knows what it takes to win a long-distance show at The Bullring.

“You gotta go all-out every lap,” said Clanton, who is tied for 11th in the WoO points standings entering the weekend at Columbus. “It don’t matter if it’s 50 laps or a hundred laps — there ain’t no riding there. You gotta go from lap one to lap 100.

“And at that place, you can go 70 or 80 laps of green-flag racing in a row so you gotta be in shape. If you’re not, you can go 50 laps and you’ll be tired. You’ll be falling out of the seat and they’ll drive right by you because it don’t matter when it is during the night, somebody’s gonna be tail-dragging you, or you’re gonna be in lapped traffic.”

Clanton will lead the WoO contingent into the Cash Cow 100, which stands as the biggest early-season event ever run at Columbus. His name will share the marquee with former tour champions Josh Richards of Shinnston, W.Va., who was just 18 when he won the August 2006 WoO event at Columbus, Billy Moyer of Batesville, Ark. (winner of the last Columbus tour event in March 2007), Darrell Lanigan of Union, Ky., Steve Francis of Ashland, Ky., and Tim McCreadie of Watertown, N.Y.

General admission tickets for the Cash Cow 100 weekend can be purchased online at www.worldofoutlaws.com/tickets or by calling the event hotline at (877) 395-8606. Fans who buy a two-day weekend pass in advance will receive special perks, including a discount price and the opportunity to enter the grandstand area 15 minutes prior to the general front-gate opening time for a show that is expected to pack the track’s grandstand.