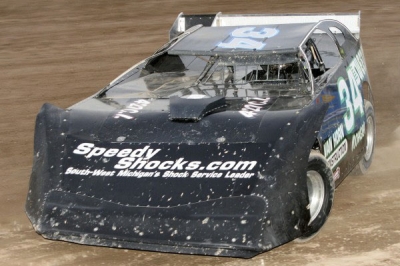 If you look at the final 2010 UMP DIRTcar point standings, you’ll notice that the top 10 is pretty well occupied by some of the Midwest’s top drivers. Summernationals regulars and regional travelers routinely fill the top of the standings every year, but in 2010 one driver didn’t have to travel extensively to finish in the top ten.

Alan Vochaska of South Haven, Mich., recorded one of the best seasons of any non-touring driver in 2010. Vochaska scored 18 UMP-sanctioned wins on his way to finishing the year ninth in the final national standings. The 27-year-old Vochaska also won track championships at both Hartford (Mich.) Motor Speedway and Thunderbird Raceway in Muskegon, Mich., and won UMP's Michigan-Wisconsin regional championship.

“It was really just a perfect season for us,” said Vochaska, who began his racing career on pavement before switching to dirt in 2003. “We had a couple of weekends where we picked up back-to-back wins on Friday and Saturday, and we won a track point title at both tracks we were campaigning and won the region for UMP. For not setting out with really any goals for the year, I think we did pretty good.”

Winning races and titles is nothing new for Vochaska. His championship at Hartford is his sixth in a row at the half-mile race track. He also won UMP’s Michigan state championship four consecutive years from 2005 until 2008 when the sanctioning body stopped crowning state champions. This year’s Michigan-Wisconsin title is his first regional championship. With those accomplishments under his belt, Vochaska is looking for a new challenge in 2011.

“I guess we’ve accomplished a lot in the past few years,” the modest Vochaska said. “We’ve ran pretty well around home, so now we’re really looking to step our program up to the next level.”

For Vochaska, the next level includes leaving home and competing in bigger races. Fortunately, Vochaska won’t have to travel very far to find those events. The World of Outlaws Late Model Series will make a return to the state of Michigan for the first time since 2007 with races scheduled at Hartford, Merritt Speedway and Winston Speedway in Rothbury.

“I’m pretty excited about some opportunities we’ll have this year to race against some great drivers. ... We’re definitely going to give it a try at those events and try to defend our home turf,” Vochaska said.

In addition to the World of Outlaws events in his home state, Vochaska also plans to include as many trips as possible to Eldora Speedway in Rossburg, Ohio on his 2011 schedule. Along with the World 100 and the Dream, Vochaska plans to compete in Sunoco American Late Model Series events at the famed half-mile located less than five hours from his home.

“We’re probably going to attempt all the races at Eldora, the Sunoco stuff just because it’s good experience for the big shows,” Vochaska said. “Eldora’s pretty close to us, and if you can win a race there or make the feature at the World or the Dream that shows that you’re doing something.”

Vochaska has some experience at Eldora. His one and only attempt at the prestigious World 100 was a disappointment, but he has shown some promise there in other events.

“We went to the World (in 2009) and we were flat-out terrible,” Vochaska said of the trip, even though he did win a non-qualifier’s race. “I was definitely out of my league, but I think we’ve improved a lot since then and I’m looking forward to going back. I had gone to a couple of the Sunoco races before that and made the Fall Nationals in 2006. So I’ve got a few laps there, but not nearly enough.”

Regardless of how well Vochaska performs this year, don’t expect to see him at the top of any point standings at the end of the season. After nearly a decade of points racing, Vochaska plans to take a break from the tiring approach.

“I think this year we’re going to completely take a break from point racing,” Vochaska said. “We’ve point raced for at least 10 years now. I think we’re just going to try to bounce around and have some fun, try to get used to being on the road a little bit and try to gear up to be on the road even more in the future.”

Vochaska knows that making the transition from a dominating weekly driver to a regional competitor won’t be an easy task. And while does have some reserve about leaving his home track, he’s looking forward to the challenge of proving himself against quality competition.

“We’ve won the title at Hartford six years in a row and it’s just time for a change,” Vochaska said. That track’s been really good to me. It’s not like we’re leaving on a bad note or anything, we just want to try something different this year.

“You can kick around home and with well-prepared equipment and some good luck, you can wrack up a bunch of wins,” Vochaska continued. “But you really don’t know how good you are until you race against the likes of (Scott) Bloomquist and (Billy) Moyer and all those guys. I’m sure that won’t be easy, but I’m looking forward to it.”

Recording another 18 wins in 2011 will be difficult, but Vochaska won’t judge the success of his season by how many races he wins. Instead, the young driver has set realistic goals for the year.

“I think we stand a chance of maybe winning some races this season,” Vochaska said. “But realistically what we’re really looking for would be to make the feature at some $10,000-to-win races and maybe even a crown jewel event. That would really be an exclamation point saying that we are ready to make the step to the next level.”