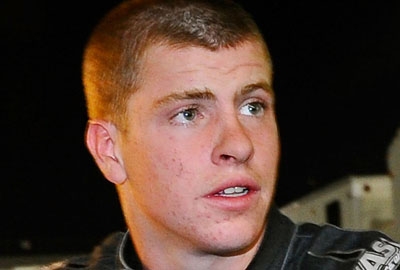 Austin Hubbard’s standout rookie season on the World of Outlaws Late Model Series in 2010 earned him plenty of attention and adulation — and not only for his unique skin-flashing, Ricky Bobby-in-Talladega Nights victory lane celebration.

But the teenage sensation from Seaford, Del., knows his unprecedented march to the Rookie of the Year award could be quickly forgotten if he’s unable to deliver even more highlights during his sophomore WoO campaign, which officially begins on Feb. 17 during the 40th annual DIRTcar Nationals by UNOH at Volusia Speedway Park. | Speedweeks previews

“I just want to keep improving this year,” said Hubbard, who will celebrate his 19th birthday the evening of the WoO season opener. “I learned a lot last year and now I have to use that experience to get better. I’m going to try to be more prepared and more serious, so if I don’t take another step forward, I’ll be disappointed.”

Hubbard certainly has all the tools to continue his rapid rise to stardom, starting with one of the top rides in the game. He’s back for a second consecutive season behind the wheel of the familiar Reliable Painting Rocket No. 19 cars owned by Dale Beitler, a veteran team owner from West Friendship, Md., who showed his confidence in Hubbard’s ability when he tapped the youngster to replace former WoO champion Steve Francis as his driver in late November 2009.

A Dirt Late Model racer since the age of 14, Hubbard opened Beitler’s eyes with several solid WoO performances in his father Mike’s equipment during the 2009 season. He then lived up to the lofty expectations placed upon him in 2010, becoming the first driver to win two A-Mains in their rookie season and finishing a rookie-record seventh in the points standings. His impressive body of work on a national stage also brought him special recognition from the Eastern Motorsport Press Association, whose membership voted him the winner of the organization’s 2010 New England Race Fuels Young Gun Award.

“Last year at this time, my realistic goal was to finish top-eight in points, win the rookie deal and win at least one race and my high standard was top-five in points and three wins,” said Hubbard, whose WoO LMS victories came on March 20 at Screven Motor Speedway in Sylvania, Ga., and in a rain-shortened event on July 9 at River Cities Speedway in Grand Forks, N.D. “The season fell right in the middle, so I’m pretty happy with that.”

Hubbard experienced some stretches of typical rookie struggles in 2010, but he still registered 11 top-five and 23 top-10 finishes in 44 WoO A-Mains starts. He plans to apply the lessons he learned last season when he hits the track at Volusia to kick off another grueling year on the road with the Outlaws.

“I’m going to be more prepared for things I didn’t know about before (traveling the full schedule),” said Hubbard. “There’s a lot of little stuff I know now — like how to run on certain types of track surfaces, how to do some things so I don’t give as much track away, how to be better on restarts, how to be more focused and ready for qualifying.

“Realistically, if you want to win, you gotta be in the redraw consistently, so you can’t be messing up in qualifying or on restarts and giving spots away. I feel like I did that too much last year so it’s probably the spot where I want to improve the most.”

Hubbard has been in Beitler’s shop at least four days a week since the 2010 season ended in November, working alongside veteran crew chief Robby Allen on a Monday-Thursday schedule. Allen, who returned to the WoO on a full-time basis last season for the first time since ending his three-year run as Rick Eckert’s chief mechanic after the 2006 campaign, is back for a second year overseeing Beitler’s program with Hubbard. New to the team, meanwhile, is mechanic Nick Hoover, a former crew member for Russ King and Brady Smith; Hoover replaces Coleby Frye, who departed Beitler’s team just before Christmas in order to pursue his own career driving Dirt Late Models and, in 2011, Legends Cars.

“We’re in good shape,” Hubbard said. “Everything is definitely clean, perfect and ready to go. We just got a new (Cornett) motor and we have some (freshened) motors coming back. We just have to drop the motors in, finalize the wraps and go racing.”

Looking ahead at the 2011 season, Hubbard set the bar high: “I want a top-five in the (WoO) points and at least three wins. My top goal would be top-three (in the points) with at least five or six wins.

“I definitely want to win more races,” he continued. “That’s what it comes down to. I love to win, so whatever I gotta do, I’m gonna do it.”

A strong start at Speedweeks would go a long way in pushing Hubbard toward his goals. He got out of the box slowly last year, leaving Volusia ranked 13th in the points standings (58 points behind) after two frustrating WoO outings (as well as two even more stressful runs in DIRTcar UMP-sanctioned action).

“Last year we had a new motor we were trying and for some reason it really upset the car,” said Hubbard, who finished 22nd and 10th (from the 24th starting spot) in the 2010 WoO A-Mains at Volusia and recorded a DNQ and a 23 rd-place finish in the two nights of DIRTcar UMP competition. “We just battled it all week long at Volusia. We couldn’t do anything to get that car to turn.

“We’ve actually changed the block in the motor now, and we’re gonna go back to Volusia with it and hammer it out. I think we can get (the combination) right.”

Hubbard is itching for a breakout run at Volusia, a fast, sweeping half-mile oval that has proven to be a thorn in his side so far in his career. In his only previous appearances there, in 2009, he failed to qualify for two WoO features and two DIRTcar UMP features; he finished 22nd in his lone A-Main start (a UMP event).

“I like Volusia a lot,” said Hubbard. “I think it’s a pretty awesome track, but I just haven’t had any success there yet. Back in 2009 our week was just like a blur of crappy runs, and last year wasn’t much better.

“I definitely want to start out better this year. Volusia has one of the toughest fields of the year besides one of the crown jewel (Dirt Late Model events), but I think we’re capable of running up front.”