Back from Down Under, Richards eyes Volusia 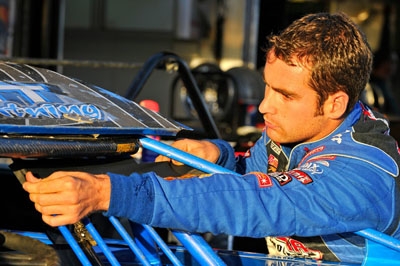 Josh Richards will gun for his third straight WoO crown in 2011. (thesportswire.net)

Josh Richards enjoyed some off-season fun in the sun during his holiday-week trip to New Zealand.

Now it’s back to the regular grind for the 22-year-old sensation, who is just over one month away from beginning his chase of an unprecedented third consecutive World of Outlaws Late Model Series championship — as well as an amazing fifth straight season-opening victory – during the 40th annual DIRTcar Nationals by UNOH at Volusia Speedway Park.

“Going to New Zealand was an awesome experience,” said Richards, who drove a Kiwi-owned Rocket Chassis car to victory on Dec. 27 in a Super Saloon division feature at the island nation’s Baypark Speedway. “It was a lot of fun and a great way to get away from everything for a week and relax. But it’s all over, so it’s time to focus on getting ready for the season.”

Richards said he’s been “wide open” preparing equipment in his team’s Shinnston, W.Va.-based shop since returning home from New Zealand in the early morning hours of Jan. 5. He did sleep in until nearly noon upon returning, but that was to recover from a 26-hour trip back to the U.S. and a healthy case of jet lag. He was up earlier the next day and hasn’t wasted any hours since as he works hard to ready his Rocket Chassis house cars for the challenging campaign ahead.

There is, of course, a bull’s eye on Richards in 2011, and he knows it. As a two-time defending national champion he’s the driver every World of Outlaws traveler wants to unseat, so he can’t rest on his laurels if he intends to stay ahead of his hungry rivals. He needs to have his familiar No. 1 firing on all cylinders when the WoO season kicks off with a 50-lap, $10,000-to-win event on Feb. 17 at Volusia, not only to prove that he’s primed for another title run, but also to position himself to extend one of the most noteworthy streaks in Dirt Late Model racing.

Richards will see action six times during the DIRTcar Nationals by UNOH — in addition to WoO showsï¿½ Feb. 17 and 19, the event includes UMP DIRTcar-sanctioned events on Feb. 14, 15, 16 and 18 — but it’s the WoO LMS lidlifter that promises to bring him the most attention. He’s assumed ownership of the tour’s season opener at Volusia, winning it four years in a row to rightfully earn the nickname Mr. Opening Night.

Three different drivers won the first race of the WoO LMS season from 2004-2006 (only the ’06 opener wasn’t held at Volusia), but since 2007 Richards has made a habit of launching his campaign in triumphant fashion at the half-mile oval located 20 minutes outside of Daytona Beach. Not surprisingly, it’s a streak that blows his mind.

“I definitely consider it one of the biggest accomplishments of my career,” said Richards, who was still one month away from turning 19 when he captured the season opener for the first time. “There’s always so many great cars there and everybody has their best stuff ready to go. It’s one of the toughest fields any track will have all year — almost as tough as a crown jewel — so winning once when you’re running against that kind of competition is awesome. Winning the World of Outlaws opener four years in a row is unbelievable.”

Richards’s Drive for Five can scarcely be more difficult than his memorable victory in the 2010 opener. After leading from flag-to-flag off the pole in 2007 and winning from the third starting spot in both 2008 (he took the lead when Shane Clanton broke on lap 30 and then held off Billy Moyer after a late restart) and 2009 (passed Shannon Babb for lead on lap 14 and never looked back), he started 17th in last year’s 50-lapper. In one of the most impressive performances of his career, Richards charged through the pack to grab the top spot from Earl Pearson Jr. on lap 27 and rode off to the checkered flag.

“I didn’t think we could pull it off starting 17th last year,” said Richards, who finished third in his opening-night heat in 2010 after winning a prelim in each of the three previous years. “But right from the start, I knew we had a great car. It was one of those rare nights where everything came together.”

Richards understands that good fortune has played a role in his season-opening success, but meticulous preparation and savvy-yet-aggressive driving has been the real difference.

“The luck factor is always involved,” said Richards, who enters the 2011 season tied with Steve Francis atop the WoO victories list since 2004 at 28 victories. “But you have to earn everything you get against the caliber of competition down there (at Volusia) and I think we have, especially last year, coming from 17th to win.

“I’ve also always loved racing at Volusia,” he continued, declaring his affinity for the fast, sweeping track. “From the first time I ran there, I just felt comfortable. It can’t hurt when you really look forward to racing at a track. I guess the place just seems to fit my style.”

Can he pull off a fifth straight opening-night win on Feb. 17? Richards isn’t the bombastic type so he’s not making any guarantees, but he is confident about his chances.

“We’re gonna give it everything we have, that’s for sure,” said Richards. “It’s definitely a challenge to start the season at Volusia but we’ll be ready for it.”

Richards heads into the 2011 season with his mind clear in the wake of his visit to New Zealand, a trip he made with his buddy, young Dirt Late Model racer Jared Hawkins of Fairmont, W.Va., who was recently hired to drive the Bobby Lake Motorsports No. 46 and plans to join Richards in the DIRTcar Nationals field.

Richards was scheduled to make two competitive appearances Down Under behind the wheel of a Rocket mount that veteran New Zealand racer Maurice Cowling purchased from Wisconsin’s Terry Casey, but he ended up making only one, a victorious run in the 20-lap Super Saloon division feature on Dec. 27.

He was allowed to drive Cowling’s full-blown Dirt Late Model against the more limited Super Saloon stockers to draw attention to Dirt Late Model racing, and he did just that by charging from the 16th starting spot to the lead in a handful of laps around the impressive Baypark Speedway, a quarter-mile oval located about 100 miles southeast of Auckland between the beach resort of Mount Maunganui and the city of Tauranga. But some competitors deemed the Rocket car too fast to participate in the Super Saloon Grand Prix on Jan. 1, so Richards only took some exhibition circuits that evening and watched Hawkins drive to a feature win in a Super Saloon ride he picked up at the last minute.

“It was all positive,” Richards said when asked about the impression his Dirt Late Model performance left on the New Zealand fans. “I think we definitely put on a good show. A lot of guys want to try to get Late Model racing going over there so (Cowling) wanted to show everybody how cool these cars are.”