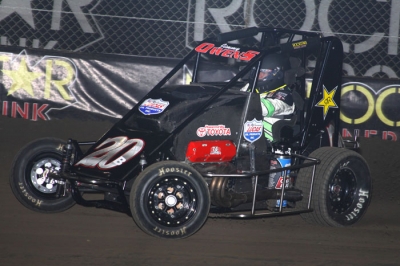 Jimmy Owens tunes up for the Chili Bowl. (Jeremey Rhoades)

The five-day event, which began Tuesday night, attracted 264 entries. Competitors were divided in four groups with each group having its own qualifying night. Owens of Newport, Tenn., is scheduled to compete in the Wednesday night qualifying group, while McCreadie of Watertown, N.Y., is schedule to compete Thursday night.

Owens, who is making his midget-racing debut, went upside-down in a crash during Monday’s practice session, but he will still race Wednesday. McCreadie, the 2006 Chili Bowl champion, finished eighth in the Chili Bowl Race of Champions Tuesday night.

Owens, a two-time runner-up finisher in the Lucas Oil Late Model Dirt Series standings, is driving for Kenny Brown Motorsports with sponsorship from Lucas Oil. McCreadie is driving for Brian Daughtery and is sponsored by the Will Kinzer Autism Research Foundation.

NEW HOME FOR BOBBY LABONTE RACING AND LONGHORN CHASSIS: Bobby Labonte Racing drivers Earl Pearson Jr. and Brad Neat will race out of a new shop during the 2011 season. Over the offseason, the team moved from its previous shop in Archdale, N.C., to a new home in Trinity, N.C. The new shop, owned by Bobby's brother Terry, offers the team more space to continue the development of the in-house Longhorn Chassis. Both Pearson and Neat will chase the Lucas Oil Late Model Dirt Series championship while also competing in select World of Outlaw Late Model Series events and non-sanctioned national events throughout 2011. — From team reports

SCHLENK AND FEGER HONORED AT UMP BANQUET: The Springfield Crowne Plaza Hotel in Springfield, Ill., played host to the 27th annual DIRTcar Racing UMP Night of Champions Awards Banquet Saturday night with Rusty Schlenk being honored for winning the 2010 DIRTcar UMP Late Model national championship. Schlenk of Jackson, Mich., earned $22,000 in points-funds money, including $20,000 for the national crown and $2,000 for capturing the Ohio/Pennsylvania/Canada State points title. “I don’t even know how to explain how I feel right now,” said Schlenk, who won the national title by a 31-point margin over Jason Feger of Bloomington, Ill. “This is a dream come true. It means so much to us. After the Friday-night race (on Oct. 1) at Kankakee (Ill.) when we clinched (the title), we had 12 grown men bawling their eyes out.” While he fell short of the national title, Feger still left the banquet with $37,000 in points fund money. Feger earned $25,000 for his DIRTcar UMP Summer Nationals championship in addition to $10,000 for finishing second in the national standings and $2,000 for capturing the Illinois State title. Scott Weber of Festus, Mo., received $10,000 and a new crate engine from GM Performance Parts for winning the DIRTcar UMP Pro Late Model title. — Kevin Kovac

TIRE TESTING PLANNED AT SUPER BOWL OF RACING: While the Super Bowl of Racing VII at Golden Isles Speedway in Waynesville, Ga., will be unsanctioned for the first time in 2011, race officials will still take strong measures to ensure no drivers use chemically altered tires at any time during the Feb. 3-5 event. Kelley Carlton, whose Kelcar Motorsports will oversee the event, has announced that multiple tire samples taken throughout the event will be sent to Blue Ridge Laboratories for testing. The Super Bowl of Racing VII will include a practice session Feb. 3, followed by separate $10,000-to-win events Feb. 4-5. — From track reports

NEW NAME AND PROMOTER FOR COLORADO TOUR: The Colorado Late Model Associate DIRTcar Series will have a new name and a new promoter in 2011. After operating the series for the past seven years, former promoters J.T. and Sandy Botts have decided to step down. Cory Moul will take over the series in 2011 and has changed the series name to the Championship Late Model Association DIRTcar Series. Moul previously served as the director of promotions for the series. The series has released a tentative 2011 schedule with 20 dates. The scheduled includes three race tracks new to the series: Aztec (N.M.) Speedway, Southern New Mexico Speedway in Las Cruces, N.M., and El Paso (Texas) Speedway Park. A new series website will be launched in the coming weeks. — From series reports

RPM PROMOTERS WORKSHOP CONSIDERING DATE CHANGE: In an effort to avoid a scheduling conflict with the IMIS and PRI trade shows, Racing Promotion Monthly is considering changing the date of its 2011 Promoters Workshop in Reno, Nev. In an email survey, event organizers asked 2010 attendees to select dates they would prefer for the workshops to take place. The options were Dec. 1-3 or Dec. 8-10. — From staff reports

COMBINED CHAMPIONSHIP PLANNED FOR LAKE CUMBERLAND, PONDEROSA: Brandon Hardgrove, promoter of Lake Cumberland Speedway in Burnside, Ky., will take over as promoter of Ponderosa Speedway in Junction City, Ky., and operate both race tracks in 2011. The two speedways will have a combined points program with the Late Model champion receiving a chassis from C.J. Rayburn Race Cars. The 2010 awards banquet for both tracks is scheduled for Jan. 15 at The Center for Rural Development in Somerset Ky. — Michael Despain

ODDS AND ENDS: The DAA Northwest Late Model Series has changed its name to DAA Northwest Extreme Dirt Late Models Series presented by Sherwin Williams. The series has released a tentative 2011 schedule that includes 18 races throughout Oregon and Washington. … Winchester (Tenn.) Speedway will host the 2011 Winterfest on Feb. 19. The unsanctioned event will include a 40-lap, $3,000-to-win Super Late Model feature that will pay at least $300 to every starter.