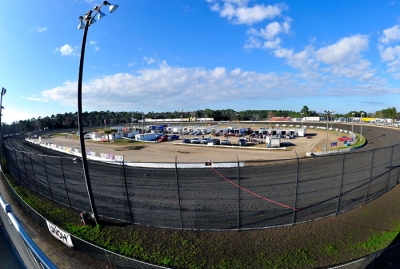 Drivers who fail to earn a coveted starting spot in Late Model features during February’s 40th annual DIRTcar Nationals by UNOH at Volusia Speedway Park will have a chance for a unique prize with the addition of the Bulrush Dash to the 2011 schedule of events.

Named after the tall grass-like plants that surround the Gator Pond beyond the backstretch of the Barberville, Fla., half-mile oval, the Bulrush Dash will cap all six nights of Late Model action. Programs contested under DIRTcar’s UMP sanction are set for Feb. 14, 15, 16 and 18, and the World of Outlaws Late Model Series takes center stage on Feb. 17 and 19.

The top-five non-transfers from each evening’s consolation races who have not yet qualified for a feature during the week will earn berths in a 12-lap, 15-car sprint that will run after the headline feature. A $300 prize and trophy will go the winner each night.

“With another big, tough field of Late Models expected for the DIRTcar Nationals by UNOH there’s going to be some drivers who don’t have an opportunity to compete in a feature event,” said UMP DIRTcar's Sam Driggers. “We’ve created the Bulrush Dash as a way to thank those racers for their participation by giving them a shot at some extra track time and money.”

Last year’s DIRTcar Nationals averaged 64 cars over four nights of racing. Of the nearly 80 different drivers that entered at least one event (two of the week's six races were rained out), 36 competitors did not crack the starting lineup for a main event.

NCRA ADDING DIVISIONAL SERIES: The Kansas-based Auto Parts National Championship Racing Association plans an offshoot Late Model division for the 2011 season in addition to its regular tour. The 41-year-old sanctioning body, which has crowned Late Model touring champions from 1979-89 and '95-'10, will launch the Great Plains Region with an eight- to 12-race schedule at tracks throughout Kansas and in southern Nebraska. The $7,075 purses will pay $1,000 to the winner and at least $200 to every starter; standard NCRA rules apply. The tentative schedule is expected to be released in mid-January with 81 Speedway in Wichita, Kan., the Kansas State Fairgrounds in Hutchinson, Kan., and Mid-America Speedway in Doniphan, Neb., among tracks expected to have dates. — David Smith Jr.

PEORIA SPEEDWAY GETS NEW OWNER, UMP SANCTIONING: Peoria (Ill.) Speedway, owned by the Hamilton family for 36 years, has been sold to 28-year-old Curt Mottaz in a deal completed Jan. 3. Sherrie Hamilton, who has operated the 46-year-old track since her husband Chuck's death in 2002, sold the quarter-mile oval to Mottaz, who she met when he promoted a sprint-car event at Peoria in August. "I want to thank Sherrie Hamilton for this tremendous opportunity," Mottaz said. "I'm really excited to get started and we hope to make Peoria Speedway the best track in the Midwest." The track has run NASCAR-sanctioned and unsanctioned Super Late Models at weekly Saturday-night races in recent years, but UMP DIRTcar will sanction the division in 2011. Mottaz plans to talk with the track's drivers and fans during the Jan. 15 Allen Automotive Trade Show at Expo Gardens in Peoria. The season opener, the $4,000-to-win Don Bohlander Tribute for Super Late Models, is scheduled for April 3, a Sunday race following the previous night's World of Outlaws Late Model Series event in La Salle, Ill. — Jeff Adams and Peoria Journal-Star reports

MLRA SANCTIONING NEBRASKA'S RICHEST RACE: The Lucas Oil Midwest LateModel Racing Association will sanction I-80 Speedway's July 21-23 Silver Dollar Nationals, the richest dirt race in Nebraska. The $25,000-to-event at the 4/10-mile oval in Greenwood, Neb., will be the richest event solely sanctioned by MLRA since June 1995 at Joplin (Mo.) 66 Speedway. Altogether I-80 Speedway hosts six 2011 events on the MLRA circuit, including the April 2 series opener and the $5,000-to-win Alphabet Soup Classic on May 29. — From series reports

EDWARDS, DEER CREEK PROMOTERS NOMINATED FOR ARPY: Promoters at a pair of Dirt Late Model ovals are among those nominated as Regional Auto Racing Promoters of the Year by the readers of Racing Promotion Monthly. The 35th Auto Racing Promoter of the Year will be revealed in Daytona Beach, Fla., on Feb. 14 during the annual RPM Speedweek National Workshop. The Queensland family of WISSOTA-sanctioned Deer Creek Speedway in Spring Valley, Minn., are nominees from the Northern Region, while Lanny and Beverly Edwards of Devil's Bowl Speedway in Mesquite, Texas, are nominees from the Great Plains Region. Lanny Edwards, already an ARPY winner in 2002, becomes the most nominated promoter of all time. Overall more than 100 short tracks in 41 states received votes from RPM readers. The last Dirt Late Model promoter to receive the overall ARPY was Lynn Phillips of Talladega Short Track in Eastaboga, Ala. — Stewart Doty

ODDS AND ENDS: After shutting down early in 2010, a new ownership group has taken over Northwest Florida Speedway in Blackmon, Fla., and is planning to reopen the quarter-mile race track in 2011. The group plans to host events on the first and third Friday every month and has set the season opener for March 4. Super Late Models will compete at each race. ... The combined banquets for Columbus (Miss.) Speedway, Magnolia Motor Speedway and the PRO Dirt Car Series are scheduled for Feb. 5 at the Trotter Convention Center in Columbus. Call (662) 574-2572 or (662) 327-3047 for tickets and more details.