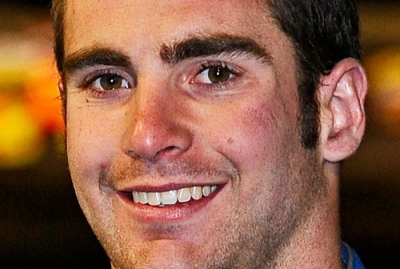 The pressure was on Josh Richards midway through the final 2010 race on the World of Outlaws Late Model Series.

Clinging to a six-point lead in the standings over Darrell Lanigan and with his friendly rival on the charge in the season-ending 50-lapper on Nov. 6 during the Lowes Foods World Finals at the Dirt Track at Charlotte in Concord, N.C., Richards could feel his hopes and dreams of winning a second consecutive championship crushing down on his shoulders.

But pressure seemingly has no affect on the sensational 22-year-old driver from Shinnston, W.Va. Doesn’t matter if he’s faced with the lofty expectations that accompany his high-profile ride, catcalls from tough fans, criticism from his father and car owner (yes, Mark Richards admits that he’s sometimes hard on his son) or even a nip-and-tuck battle for the $100,000 WoO LMS points title; he’s always cool, calm and collected.

“He’s just got a demeanor that can handle the pressure,” Rocket Chassis co-owner Mark Richards said of his son, who has driven Mark’s familiar blue No. 1 house car for his entire seven-year career. “The spotlight’s on him all the time because of who he is, so he gets overanalyzed by a lot of people. The average person couldn’t deal with that, but Josh doesn’t really care what people say about him. He just goes out there and races without getting too worked up or emotional about any situation.”

That ice-water-in-the-veins persona is a big reason why Richards put his name in the record book in 2010, becoming the first driver in the modern era of the WoO LMS (2004-present) to win the championship twice. He survived Lanigan’s dramatic come-from-behind bid in the season finale to capture the title by four points — the second-closest championship margin in the history of the national tour.

“When you think about winning the championship by four points — four points! — it just seems crazy,” said Richards, who clinched the title by finishing fourth, to Lanigan’s third (from the 21st starting spot), in the World Finals nightcap that was witnessed by a sell-out crowd of over 14,000 and a live television audience on Speed. “We race all year and it comes down to two positions. It just goes to show you that you have to fight for every spot in every race.

“Lanigan was fast all year and put up one heck of a fight, but we were lucky enough to pull it off. Winning the championship last year was a feat in itself, but to come out on top for the second year in a row shows how strong our team really is.”

There were plenty of opportunities, however, for Richards to succumb to the pressure of the intense 2010 points race. While he registered a series-best eight wins (highlighted by his first-ever 100-lap score in a $20,000-to-win event Sept. 1 at New York’s Mohawk International Raceway), finished 43 of the season’s 44 events on the lead lap, recorded 27 top-five and 36 top-10 finishes and led the points standings after more than three-quarters of the season’s events, he did experience some bumps in the road. It was his knack for responding positively to each setback that proved his mettle.

Consider this: six times Richards fell to second in the points standings — once to Brady Smith after the second race of the season; three times to Tim McCreadie early in the campaign; and twice to Lanigan down the stretch — but each time he roared back in the next event to regain at least a share of the points lead. What’s more, Richards didn’t flinch when he watched Lanigan completely erase a 78-point deficit in the standings on the strength of a red-hot summer stretch nor when Lanigan sliced Richards’s points lead from 22 to six points with a fourth-place finish (to Richards’s 12th) in the postponed Saturday-afternoon 40-lapper during the World Finals.

“Darrell made up a lot of ground in the middle of the summer, which definitely put more pressure on me and our team,” said Richards, whose longest winless stretch of the season — 12 races from late June through the entire month of July — largely coincided with Lanigan’s surge. “It was a little frustrating because we were running well but just not as good as him, but you can’t overreact to what’s happening. You just have to keep digging and doing your thing.

“The main thing is to focus on what your team needs, your car needs and what you need to be better,” he continued, perfectly articulating the champion’s philosophy he has acquired. “Don’t worry about what everyone else is doing, because when you’re focusing on someone else all the time it’s hard to focus on your own program.”

Actually, Richards’s ability to maintain his composure in the face of Lanigan’s assault — an amazing comeback highlighted by a streak of nine consecutive top-three finishes that was unprecedented in WoO LMS history — was made even more impressive by the fact that he’s so close to the Kentucky driver. The Richards and Lanigan teams are virtually inseparable on the road and, of course, Richards considers Lanigan, 40, one of his racing mentors.

“We park together, we travel together up-and-down the road, we share information and we’re great friends,” Richards said of Lanigan, who won a career-high seven WoO LMS A-Mains in 2010. “I’ve watched Darrell race ever since I was a little kid and he’s helped me become a better driver, so it seems surreal for (the championship) to come down to a battle between two buddies.

“We’re always pulling for each other, but we both want to win too — that’s what makes us drive even harder. It was cool to have Darrell come over and be supportive of us and congratulate us after we won the championship because I know if I was in his position I’d be devastated to come that close after putting all that work in.”

This was, in fact, the second straight season that Richards outdueled a longtime advisor for the WoO crown. Last year his victim was Steve Francis, a former driver of the Rocket Chassis house car that Richards now steers. Francis, 43, entered the 2009 World Finals with a four-point lead over Richards but ended the weekend 14 points behind his protege, who, at 21, became the youngest champion of a national touring series in the history of Dirt Late Model racing.

The experience of the pressure-packed ’09 points race obviously served Richards well in his run to back-to-back titles. He came to Charlotte this year more confident, more relaxed.

“I learned some things last year,” said Richards, who ended the 2010 season tied with Francis atop the WoO career win list since 2004 (both have 28 victories). “I kind of proved to myself that I could do this. I realized that as far as decision-making and things for the car, you just gotta go with your gut.

“I guess over time you just mature and start to figure things out. There’s times when it seems like it’s never gonna come, but it does. Time fixes everything. If you just keep watching and learning and doing it, you just kind of move right along.”

Richards has become one of the biggest stars in Dirt Late Model racing, a supreme talent who is viewed as a contender whenever his team’s hauler pulls through a pit gate. But he still lives at home with his father, mother Tina and younger sister Morgan, and he’s still coming to grips with his newfound status and position in life. He earned just shy of $300,000 on the WoO tour in 2010 plus nearly another 100-grand off the circuit — even factoring in that he collected only a percentage of that total, “the amount of money he makes in a year right now is pretty unbelievable for a kid his age,” said Mark Richards — but anyone who knows him will tell you that his success hasn’t prompted him to walk with his chest puffed out or live the high life. He’s still modest, accessible and simply infatuated with racing.

“When I think of myself, I’m just Josh, you know?” summarized Richards, who was so steady night-in and night-out in 2010 that he ran just one WoO consolation race all season and didn’t use a single provisional starting spot. “I don’t think of myself as a champion or anything. I’m just a racer who loves to race and have fun.

“It’s crazy how fast it’s happened, how I’ve gotten to this point. I remember when I was in Austin’s shoes (18-year-old WoO Rookie of the Year Austin Hubbard), thinking how, Man, you just want to be up there and winning, but you know it’s gonna take some time. You just have to realize that you can do anything if you truly have the desire in your heart and put the effort into it. You can achieve anything.”

Richards paused, and then continued: “I decided a few years ago, when I graduated high school, that this is what I wanted to do — I wanted to be a race car driver. It wasn’t for the money, it wasn’t for the fame — none of that. It was to race. That’s what it’s all about. Yeah, when you win races and win championships, it definitely makes your living a lot easier, but it still takes every little piece to be able to do it. To do what we’ve done over the last couple years is incredible.

“The first couple years I raced, I always thought, If it doesn’t work out, I can always go back to college. But now, all my friends have graduated college and they’re moving on, and I’m in this. This is my life. But this has been a dream of mine since I was a little kid and I wouldn’t trade it for the world.”