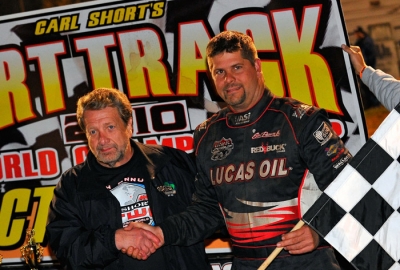 Will the Dirt Track World Championship relocate for the fourth straight year? Race promoter Carl Short says he hopes to announce the host track for the $50,000-to-win race by mid-January, but he's mum about details for the October classic.

Short says many tracks have contacted him showing interest in the 31st running of the unsanctioned event, and he's whittled the possibilities to just a few tracks. West Virginia Motor Speedway in Mineral Wells, W.Va., hosted 2010's event but Short refused to say whether 5/8-mile WVMS — or any other specific track — was in contention.

"I better keep my mouth shut the next two or three weeks and see how things play out," said the Hall of Fame promoter, who admitted he was leaning heavily toward one track. "There's only so many places that will accommodate it, and you've just gotta do what you think is best."

The final decision involves "more than just venue" and his upcoming announcement will include "a few other changes" to the race, Short hinted, including a different race format than what was used at WVMS.

The DTWC has been among Dirt Late Model racing's most prestigious events, but it hasn't been held at the same track in consecutive years since K-C Raceway near Chillicothe, Ohio, hosted the race from 2005-'08. Lawrenceburg (Ind.) Speedway held the event in '09 before it returned to West Virginia Motor Speedway, which also hosted the race in '99 and 2000.

Car count has also dropped over the past five seasons. K-C drew a near-record 143 Late Models in '06, but that dropped to 117 and 106 the next two years. Lawrenceburg drew 71 cars on a bitter-cold '09 weekend and WVMS, which drew 140 cars 10 years earlier, attracted an event-low 53 cars and fewer fans than the Lucas Oil-sanctioned Hillbilly 100 at WVMS six weeks earlier.

K-C Raceway owner Jeff Schrader confirmed he's been in contact with Short about the possibility of returning the race at K-C, a 3/8-mile track under Jim Nier's ownership during its DTWC era.

"We'd love to have that race back. I've been working on Carl hard and heavy," Schrader said. "I told him I need a real good Christmas present. He just laughed and said I'll see what I can do." — Todd Turner

DEERY BROTHERS SERIES SET FOR RICHEST SCHEDULE: The 25th annual Deery Brothers Summer Series is guaranteed to be the richest in the history of the IMCA Late Model tour with five of 19 events paying $3,000 or more to win. The biggest checks will be given at 34 Raceway’s $10,000 to win Pepsi USA Nationals Sept. 2-3 in West Burlington, Iowa, and at Farley (Iowa) Speedway’s $7,500-to-win Yankee Dirt Track Classic on Sept. 16-17. The inaugural Red Dralle Memorial at Independence (Iowa) Motor Speedway June 29 and the Sept. 23-24 series finale at Quad City Speedway in East Moline, Ill., both pay $5,000 to win. Top prize at the April 9 Brenton Slocum Memorial at 34 Raceway is $3,000. The schedule, which opens April 2 at Dubuque (Iowa) Speedway, also makes its first visit to West Liberty (Iowa) Raceway since 1990. — Bill Martin

GOLDEN ISLES ADDS SUPER BOWL DETAILS: Golden Isles Speedway near Brunswick, Ga., has released more details about its Feb. 4-5 Super Bowl of Racing VII at the 4/10-mile oval in southeast Georgia. Besides a pair of $10,000-to-win Super Late Model programs, the limited sportsman division will also be in action. Adult grandstand tickets are $30 each night ($35 for reserved) and trackside parking is $40 per person (and $20 for the parking spot). There are also 75 RV spots available at $30 per night (water and power included). The weekend carries a $70,000 purse overall. Practice is scheduled for Feb. 3 and grandstand admission is free. For more information, see goldenislesspeedway.com or call (912) 778-3767. — Dan Nicholson