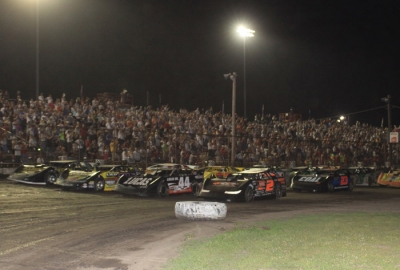 Thanks to a waiver from UMP DIRTcar officials, weekly races at Tri-City Speedway in Granite City, Ill., will be UMP-sanctioned in 2011, series and track officials confirmed Wednesday.

Special events at the 3/8-mile oval remained UMP-sanctioned in recent years while the series studied whether or weekly sanctioning at Tri-City would negatively impact Belle-Clair. UMP series director Sam Driggers decided that sanctioning both tracks is feasible.

“We’re looking forward to Tri-City being weekly sanctioned in 2011,” Driggers said. “We’ve monitored it over the past three years and the fact is cars at that track don’t go to the neighboring tracks on Friday nights, and vice versa. So we looked at it from a perspective where it’s not hurting anything because the drivers are going to race there anyways.”

Driggers said the sanctioning of Tri-City does not mean UMP will relax its limitations on track sanctioning, which normally requires same-night sanctioned tracks to be at least 50 miles apart.

“Obviously this is a different case than most,” Driggers said. “There could be other tracks in the country that try to do the same thing and it would definitely hurt other nearby tracks. So when there’s other situations like this, we just have to handle it kind of case-by-case.”

Driggers noted that Belle-Clair officials were concerned about the sanctioning decision, but he said that he doesn’t see Tri-City hurting the car count at the fifth-mile Belleville oval.

“They’re concerned with it, but we assumed they would be,” Driggers said. “We did the research and it’s just not going to affect them. We’ve got the numbers to prove this can work. Even when Belle-Clair (ended its season) early last year, only one or two of their regular guys started going to Tri-City, so I just don’t really see where it’s going to be detrimental to either track.”

Tri-City co-promoter Kevin Gundaker is excited to bring back weekly UMP sanctioning at Tri-City. All five of the track’s divisions, including Super Late Models and Crate Late Models, will be sanctioned.

“Being weekly sanctioned is going to be great for our drivers,” Gundaker said. “The UMP champions have come from the Midwest the past several years and we know it’s a big deal to drivers in this area. We’ve got a lot of guys that chase UMP points right here from our general area that race with us weekly. It’s going to be great for them to be able to accumulate points now every Friday night.”

Gundaker also noted that the facilities at Tri-City are being upgraded in preparation for 2011.

... AND DEVELOPMENTS AT ANOTHER TRI-CITY SPEEDWAY: Tri-City Speedway in Franklin, Pa., also has major changes coming up in 2011. Under new management, the track will run Friday nights (instead of Sunday) and will run Super Late Models as the headlining division. The Super Late Models replace big-block modifieds on the card at the half-mile track that also plans to continue its Fastrak-sanctioned Crate Late Model division. A rules meeting is scheduled for Dec. 18 at Big Daddy's Speed Center in Grove City, Pa., with Late Model discussions from 9:30 a.m.-11 a.m. For more information, see www.tricityspeedway.com. — From contributor and staff reports

WILD WEST SHOOTOUT TICKETS ON SALE: Tickets are on sale for the fifth annual Wild West Shootout scheduled for Jan. 8-16 at 3/8-mile USA Raceway in Tucson, Ariz., track officials announced. The event will feature six Super Late Model events over nine days, concluding with the $10,000-to-win Bill Cheesbourg Memorial on Jan., 16. Ticket information can be found online at www.usaraceway.net/Uploads/WildWestTickets.pdf, or by calling the track at (520) 574-8515. — From track reports

LUCAS OIL ANNOUNCES EAST BAY TIRE RULE: Officials with the Lucas Oil Late Model Dirt Series have announced the tire rule for the 35th annual DART Winternationals schedule for Feb. 7-12 at East Bay Raceway Park in Gibsonton, Fla. Hoosier compounds that will be allowed: 1100, 1200, 1300, LM 20, LM40, 1600 and the shoulder plated D55; American Racer compounds allowed are: SD23, SD33, SD38, SD44 and MD56. Just like 2010, each competitor must use the same set of tires for time trials and heat races. The series will also enforce the Sept. 1-instituted head-and-neck restraint requirement at East Bay. — From series reports

VIRGINIA MOTOR SPEEDWAY MAKING IMPROVEMENTS: Virginia Motor Speedway has undertaken several new construction projects in preparation for the second annual Commonwealth 100 on April 15-16. The $20,000-to-win World of Outlaws Dirt Late Model Series event will open the track’s 2011 season. Included in the projects at the half-mile oval in Jamaica, Va., are a new set of restrooms, a new registration and tech building, new backstretch billboards and a new 8-acre parking area for RVs and campers. Ticket information for the Commonwealth 100 can be found at www.vamotorspeedway.com, or by calling the speedway office at (804) 758-1867. — Dave Seay

ULTIMATE LATE MODEL SERIES RELEASES SCHEDULE: Officials with the newly formed Ultimate Late Model Series have released the series’ 2011 schedule. Officials have booked 17 races and are looking to add three more events. The series, a combination of Fastrak and Southern All East tours, will kick off its inaugural season with a two-race weekend in South Carolina, starting with a visit to Modoc Speedway on March 5 for a $5,000-to-win event. The series will move to Cherokee Speedway on March 6 for the $10,000-to-win March Madness. Officials also announced that VP Racing Fuels has been named the official fuel provider of the series and Hoosier Tire will be the series’ official tire supplier, though legal compounds are yet to be determined. — From series reports

ODDS AND ENDS: Whynot Motorsports Park in Meridian, Miss., will host the third annual Winter Bash on Jan. 15. A $1,500-to-win Crate Late Model feature will highlight the event. ... Officials with the Steel Block Bandits have released the series’ 2011 schedule. The tour will kick off its second season March 26 with a $2,500-to-win event at County Line Raceway in Elm City, N.C. The working schedule currently includes 13 events, but series officials are looking to add a few more races. ... Long-time car owner and crew chief Bill Potts was inducted into the Hagerstown (Md.) Speedway Hall of Fame at the track's recent banquet. Potts, involved in racing more than 50 years and now a tow-truck operator at the track, served as crew chief for Late Model drivers such as Ernie Davis, Nathan Durboraw, D J. Myers and Andy Anderson. ... Screven Motor Speedway in Sylvania, Ga., has added a Feb. 2 open practice preceding the $10,000-to-win Winter Freeze, an unsanctioned Late Model event set for Feb. 3.