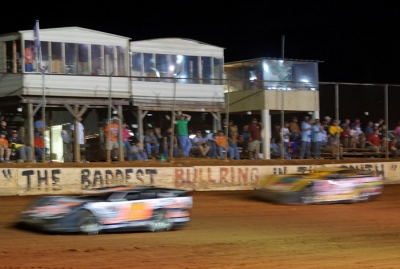 When the 2011 World of Outlaws Late Model Series schedule is released at the Performance Racing Industries trade show later this week in Orlando, Fla., it will feature a number of changes from the past year’s schedule, including the addition of a $20,000-to-win event at Columbus (Miss.) Speedway in March.

Series and track officials confirmed Monday that the inaugural event will be held March 17-19 at the popular third-mile, high-banked oval.

“Columbus Speedway is known for its great Late Model racing, so it really makes since to have a big race there,” WoO series director Tim Christman said. “That area really supports racing and it’s really an opportunity for fans from all over the Deep South to come see a great race.”

The event will kick off an early-season Southeast swing for the series that will also include races the following weekend at Ocala (Fla.) Speedway, Screven Motor Speedway in Sylvania, Ga., and a yet-to-be announced racetrack new to the series schedule.

“We’ll have that race in Mississippi and then we’ll be back in the South the following weekend for a nice three-day weekend,” Christman said. “It should be a good trip for race teams that makes a lot of sense as far as traveling. They’ll have the opportunity to compete in a big-money race and then three more races.”

Christman indicated the popularity of the long-running Magnolia State 100, an unsanctioned September event paying $25,000 to the winner, helped in the decision to add a major event at Columbus in the spring.

“They’ve had a lot of success with their big fall race,” Christman said. “There’s really nothing in the spring so we talked with (Columbus Speedway promoter Johnny Stokes). We all thought it was a good idea to do something early in the year and it should be a great way to kick off the season down in the Deep South.”

The event marks the series first event at Columbus since March 2007 for a $10,000-to-win race that was won by Billy Moyer of Batesville, Ark. Stokes is excited for the national tour to return to his racetrack.

“We’re really looking forward to have the World of Outlaws come to Columbus Speedway,” Stokes said. “We’ve had success with them here in the past and we’re hoping to have another great show.”

In another peek at the World of Outlaws schedule, Christman also confirmed the tour will once again hold West Virginia RaceFest on Memorial Day weekend. The second-year event began in 2010 with a pair of races at West Virginia Motor Speedway in Mineral Wells, W.Va., and the even will include a third race for 2011, he said.

“Last year we started the RaceFest at West Virginia Motor and we’ve been planning for a while on doing that again this year,” Christman said. “We actually added another event to that, so it will be Friday, Saturday and Sunday this year.”

The full 2011 World of Outlaws schedule will be released Thursday at PRI. Christman said to expect a few more surprises, including the announcement of another “big event” in July. — Joshua Joiner

APPALACHIAN SPEEDWEEK SET FOR JUNE 4-10: With an aim toward streamlining travel, Appalachian Mountain Speedweek officials announced the 2011 schedule of seven races at seven tracks in Maryland, Virginia and Pennsylvania from June 4-10. The most significant change in the third series season was shifting Winchester (Va.) Speedway Speedway to the Sunday date previously held by Selinsgrove (Pa.) Speedway; Roaring Knob Motorsports Complex in Markleysburg, Pa., replaces Selinsgrove on the schedule. "We feel this should cut down on some mileage that the competitors endured the past two years,” said co-promoter J.R Keifer. Hagerstown (Md.) Speedway hosts the June 4 opener followed by Winchester on June 5. The next five races are at Pennsylvania ovals: Roaring Knob (June 6), Williams Grove Speedway in Mechanicsburg (June 7), Lincoln Speedway (June 8), Port Royal Speedway (June 9) and Bedford Speedway (June 10). — From series reports

SUPER LATE MODEL, CRATE TOURS BLEND IN SOUTH CAROLINA: The Southern All Star East tour has joined with the Fastrak Racing Series to create the Ultimate Super Series, a tour that will welcome drivers utilizing a variety of engine combinations. Super Late Model, Limited Late Model and Crate Late Model engines will be welcome on series that has already booked 16 races for the 2011 season. The scheduled is expected to be released at this week's PRI trade show in Orlando, Fla. Series officials say the series points fund will be $60,000 on a tour that plans to allow most engine combinations. "This gives everyone a chance to compete in the largest Super Late Model series point fund in the Southeast," said co-promoter Lennie Buff of Cherokee Speedway. — From series reports

MARYVILLE, TENN., TRACK RETURNS TO HISTORIC NAME: A historic racetrack in Maryville, TN will return in 2011 with a name from the past, a new look, and the NeSmith Chevrolet Weekly Racing Series Late Models as its top division. Mountain Raceway Park is going back to its old name, Smoky Mountain Speedway and plans to feature the NeSmith Chevrolet Weekly Racing Series Late Models as the premier division for 2011 after running the NeSmith-sanctioned Crate Late Models along with Limited Late Models the past two seasons. “We looked at the numbers from last year, both car count and purse-wise, and we’re confident this move is in the best interest for everyone involved with the track," promoter Kevin Coffey said. Weekly NeSmith features will pay $700 to the winner at the 4/10-mile clay oval. The 45-year-old track, which hosted NASCAR Grand National events in the 196s0, also plans to host a number of Super Late Model events. — Roby Helm and track reports

IMCA TRACKS COMBINE FOR TWO-TRACK POINTS FUND: Quincy (Ill.) Raceway and 34 Raceway in West Burlington, Iowa, plan a two-track points fund for IMCA Late Models in 2011, the tracks announced. The Q34 IMCA Late Model Points fund will pay a guaranteed $3,000 ($1,000 to the overall champion) for the tracks that are about 85 miles apart and run Saturday (34 Raceway) and Sunday (Quincy). The tracks hope to find sponsorship to increase the points fund to $5,000. Schedules will be announced later with 34 Raceway planning about 14 Late Model events and Quincy planning 18 or 19. In other news, 34 Raceway announced its weekly IMCA Late Model feature will pay $125 to start. — Jack Walbring and Dana Royer

ODDS AND ENDS: Eldora Speedway has scheduled its postseason banquet for Jan. 22 in the Eldora Ballroom in Rossburg, Ohio. Among award-winners will be Brian Ruhlman for the Sunoco American Late Model Series and Matt Miller for Eldora's Late Model championship. ... Warrior Race Cars in conjunction with Goddard Performance Parts has scheduled a Dec. 17 open house at the Knoxville, Tenn., race shops. For more info see www.goddardwarrior.net or call (865) 573-2411.