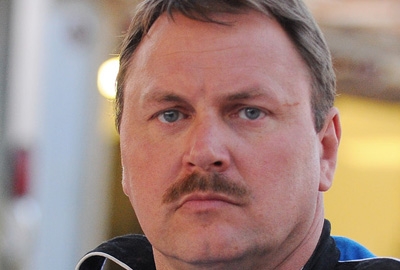 Clint Smith failed to snap his long, frustrating winless streak on the World of Outlaws Late Model Series in 2010, but he made strides with his performance.

And if the positive vibe he has about the slightly new direction of his 2011 racing program is correct, the hard-nosed veteran from Senoia, Ga., just might rediscover his winning touch on the national tour.

"I feel good about next year," an optimistic Smith said while working in his shop earlier this week in preparation for his eighth consecutive season as a WoO regular. "I think it's going to be a great year for us."

Smith's attitude might seem a bit rosy for a driver who is winless in his last 114 WoO starts and recorded just six top-five finishes en route to a distant ninth-place result in the 2010 points standings, but he has good reason to be bullish on his chances in the coming season. He recently reinforced his own team by striking a deal to serve as a mentor to Brian Reese of Sharpsburg, Ga., a 29-year-old dirt Late Model upstart who plans to travel alongside Smith in 2011 and compete for the WoO Rookie of the Year award.

In exchange for sharing his nearly 30 years of racing experience and knowledge with Reese, Smith, 45, will receive valuable assistance from Reese Motorsports that should improve his own operation.

"They're local, they came into some money and wanted to race, and I guess I was the best one in the area to teach him how to race," Smith said of Reese, whose parents are his primary backers. "They came to me (during the season) and said they've been trying all year and hadn't had any success, so they were looking for some help. I needed some help too, so we got a partnership together and now we're going at it."

"It's a good situation for both of us. I'm going to try to help (Reese) venture out and do some racing on the road with the World of Outlaws Rookie of the Year program to progress his career; hopefully we'll pick him up five years (of experience) in one year. And having him as a teammate is going to help my program significantly."

Smith, of course, has struggled to find consistency on the WoO since 2007, when he won four A-Mains and finished a career-best third in the points race after leading the standings for nearly half the season. He hasn't cracked the top five in the points standings at any point in the last three campaigns and hasn't reached victory lane since June 17, 2008, at Port Royal (Pa.) Speedway.

But Smith showed signs of a revival in 2010 after switching back to Rocket Chassis for the first time in five years, qualifying better and registering three runner-up finishes, including two during a late-season stretch that saw him tally four top-fives in five races. An outbreak of hard-luck engine problems, however, prevented him from building any momentum.

"We ran better this year than we have in the past few years, but we didn't have anything to show for it," said Smith, who sat 10th in the points standings for most of the 44-race schedule before overtaking Chub Frank for ninth during last month's season-ending Lowes Foods World Finals at the Dirt Track at Charlotte. "We had a real good car at a lot of places, but I just had some issues with some stuff — not blaming anyone — that caused me to have some motor problems when we were running well and that put us back in the points."

The powerplant failures also forced Smith, who has 11 career WoO victories, into scramble mode several times in 2010. With Reese's team providing Smith more resources, he's confident he won't have to worry about having an engine to bolt inside his car.

"He's helping me with my motor program," Smith said of Reese. "I'm still owning some motors and he's owning some motors, but we've got a team situation. If he needs a motor he gets one from me, and if I need one I get one from him. It gives me something to fall back on in case I need it.

"Any time you get a team situation, usually it will be better than a single person," he continued. "This will help me get more of a high-powered team going, more on the level of a Josh Richards and Darrell Lanigan. With this I'll feel like I'm more an equal to those top teams, able to compete with them on a regular basis. Rather than just showing up and trying to place, we're gonna be showing up trying to win."

Smith, whose race shop is just 4 miles from Reese's, debuted as Reese's adviser last month. Smith's influence was immediately apparent on Nov. 13 when Reese set fast time for the unsanctioned National 100 at East Alabama Motor Speedway in Phenix City, Ala.

"I think we've already helped him pick it up and hopefully he'll keep improving next year," said Smith, who is bringing mechanics Darrell Cooper and Brad Baum back to service his equipment in 2011. "Hopefully we'll pick it up too. We know what we're racing against on the World of Outlaws tour; it's a tough program. But we're gonna be ready to go out there and try to win races."