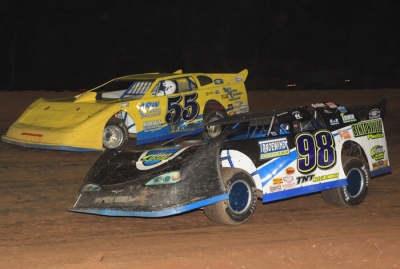 Justin Wells (98) moves into the lead over Ken Essary (55). (stlracingphotos.com)

Jack Sullivan of Greenbrier, Ark., finished second followed by Jesse Stovall of Galena, Mo., who took the third spot from Essary on the final lap. John Anderson of Omaha, Neb., rounded out the top five finishers.

"This was a tough field of cars and the only thing that didn't go right was our redraw," said Wells, who drew the outside third-row starting spot. "And that even worked good, because coming through the field, I found several different racing lanes which helped me through the lapped traffic.

Essary led from the outset over polesitter Rylan Long with Chris Morelock, Chuck Comer, Sullivan and Wells giving chase. Wells moved up to second following the race's lone caution on the third lap, and he made his winning move on the sixth circuit.

With Wells pulling away to a big lead, Sullivan won the second-place duel with Essary and vainly tried to catch the leader.