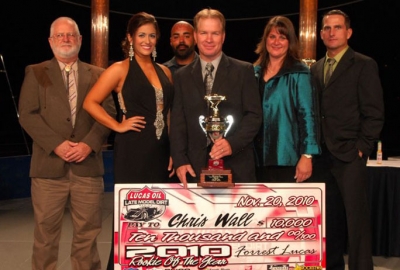 Champion Scott Bloomquist and regulars on the Lucas Oil Late Model Dirt Series were honored at the Nov. 20 banquet in Indianapolis, Ind., but the event also saw other key awards handed out at Lucas Oil Stadium.

Chris Wall of Springfield, La., was announced as winner of the Appliancezone.com sponsorship for the 2011 season, a package worth $70,000 after a competition among Wall and four other drivers. The 42-year-old Wall was named the driver development program winner over Jimmy Owens, Don O'Neal, Ray Cook and Steve Casebolt in a competition that included online fan voting, driver performance and voting by panel members.

"Without the fans, I wouldn't be standing here," said Wall, who also picked up $10,000 as the Rookie of the Year on the Lucas Oil Series. I feel like as I go through this coming year, I have to remember that the fans put me in this position."

Among other awards, Bill and Debbie Reed of Dirt Racing Outreach were presented with the Mike Swims Award of Excellence, presented to those who've gone above and beyond the call of duty in the racing industry, making a lasting impact on the lives of racers, crews, and fans. In accepting the award, Bill Reed credited the late Swims and others involved with the former Hav-A-Tampa Dirt Racing Series with laying the groundwork for the Lucas Oil tour. "They had a vision, and we're reaping that right now. This is awesome," Reed said. "We're very honored."

Tommy Hicks, the crew chief on Bloomquist's title-winning team, was honored for the second year in a row as the DirtonDirt.com Crew Chief of the Year. Hicks received $500 and a trophy. — From series and staff reports

ELDORA IMPROVES ONLINE TICKETING: One of Dirt Late Model racing's most famous ovals plans to debut new ticketing software on Dec. 4 that will improve online ticket purchases at Eldora Speedway in Rossburg, Ohio. The track hopes the new system will ease the buying process and allow race fans to access and change account information from home. The software will also allow fans to search and purchase specific seats within a section and row. Tickets for next season's June 10-11 Dream XVII and Sept. 9-10 World 100 will go on sale with the new software the first Saturday in December. — From track reports

DOCUMENTARY FEATURES EARLY YEARS AT STATELINE: Fans of Stateline Speedway in Busti, N.Y., will enjoy a new documentary movie that chronicles the first 10 years at one of New York's top Late Model tracks. The 90-minute video by Randy Anderson follows the construction of the track by five original owners, including current driver Chub Frank's father Jerry, starting in 1956. The movie also recaps the first decade of action with drivers such as Squirt Johns, Bobby Schnars, Tom Dill, Chuck Piazza, Ron Blackmer, Eddie Kisko and others with first-person interviews, home movies, newspaper accounts and track photos from late track photographer Gordon Mahan. To order the $25 DVD (plus $5 shipping), download an order form at www.chautauquasportshalloffame.org. Call Anderson at (716) 763-2173 for more information. — From staff reports

GREEN VALLEY SCALES BACK CRATE NATIONALS: The GVS Crate Nationals, a Crate Late Model event that paid winner Jonathan Davenport $25,000 in 2010, will see a new format in 2011 with three nights of racing capped by a $5,000-to-win feature. The March 24-26 event also includes a pair of $2,000-to-win events the first two nights to give drives the opportunity to make money each night of the unsanctioned event at the 3/8-mile oval. For more info, see www.greenvalleyspeedway.com. — From track reports

SOUTHERN ALL STAR RACE DIRECTOR RESIGNS: Kelley Carlton, an official on the Southern All Star Series for the last 10 years and the series director most of that stretch, announced his resignation from the series following the Nov. 20 season finale at Cleveland (Tenn.) Speedway. Carlton said he'll likely remain part of the dirt racing community but isn't sure about his plans for 2011. Carlton served as series director from 2003 until 2009, when he became race director with the addition of new series director Brad Byrd. — From staff reports

ODDS AND ENDS: Mike Starr of Seymour, Ind., the 1975 Brownstown (Ind.) Speedway Rookie of the Year in the Late Model division, died Oct. 20. He was 62. Starr was a Late Model regular at the quarter-mile oval in southern Indiana in the mid-70s. ... Tyler Reddick, the 14-year-old racer from Corning, Calif., announced at the Lucas Oil Series banquet he'll be fielding Bloomquist Race Cars in 2011. ... Shane Liebig, who leased and operated Black Hills Speedway in Rapids City, S.D., in 2010, bought the half-mile oval for $350,000 at a Nov. 18 auction, the Rapid City Journal reported. ... Moler Raceway Park near Cincinnati, Ohio, has cancelled its second annual Turkey Gobbler 50, a $1,500-to-win Dirt Late Model event originally scheduled for Nov. 26. ... Trak-Star Race Cars of Cuba, Ala., has clinched the chassis manufacturers' championship on the NeSmith Chevrolet Dirt Late Model Series. ... The Comp Cams Mid-South Racing Association will hold its postseason banquet Jan. 29 at the Holiday Inn Conference Center near the Little Rock, Ark. airport. ... The Fastrak Racing Series has added two weekly tracks to its Crate Late Model program for 2011, Eriez Speedway near Erie, Pa., and Sharon Speedway in Hartford, Ohio.