Notes: Thomas lured out of retirement at EAMS 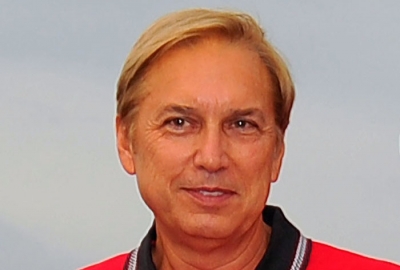 Billy Thomas has made more than a few laps at his family's East Alabama Motor Speedway, but the 57-year-old Thomas plans to race a Dirt Late Model at the 3/8-mile oval this weekend for the first time since 1985.

"I just got through grading the track and packing it in," Thomas said in a Tuesday morning telephone interview. "I've got a million laps on it doing that, but that's a lot different going 20 or 30 mph instead of going 110."

That's the speed Thomas plans to run Friday during the inaugural Zaxby's Race of Champions, the track's addition to the 36th annual National 100 festivities for Alabama's richest Dirt Late Model race on Nov. 11-14 in Phenix City.

"I'm excited about it. I don't have any expectations," Thomas said of his brief foray out of retirement. "This far into my career it doesn't matter. I'm just going to have fun."

While Sunday's $20,000-to-win National 100 for Super Late Models highlights the weekend, Friday's Race of Champions adds some spice to the long weekend of racing that wraps up the season at EAMS. The track has invited past winners of the National 100 and Alabama State Championship to compete in a 20-lap shootout paying $1,000 to the winner.

"Next year we'll work on this a little bit harder and get a couple of more guys to come out of a retirement and race with us," Billy Thomas said.

Thomas had a relatively brief 11-year Late Model career, grabbing a National 100 victory in 1978 and finishing fourth in points during the first season of the National Dirt Racing Association the following season. The co-founder of Jig-A-Lo Chassis also captured a selection of major regional victories along with a pole position at Eldora Speedway's World 100, where Thomas had a best finish of seventh in '77. But his Dirt Late Model career came to an abrupt halt with his father Jimmy's death.

Thomas still climbed behind the wheel of a race car for several years, running on the ARCA Super Car Series a few seasons on asphalt, and through the early '90s at ARCA's twice-a-year events on mile-long dirt tracks in Illinois. "Those ARCA teams, it would kind of piss them off when we'd go up there and outrun," Thomas says proudly.

In recent seasons, Thomas has been assisting his son William's Dirt Late Model career, and don't be surprised if William is the wild-card choice to run in the Race of Champions. "It would be fun to race against him, for sure," the elder Thomas said.

Billy will drive one of William's Scorpion Chassis cars — carrying Zaxby's sponsorship — this weekend, and he plans to practice Thursday night to adjust to a division he hasn't competed in for 25 years

"It's going to be quite a challenge for me, because they're entirely different," said Thomas, who was inducted into the National Dirt Late Model Hall of Fame this year along with other family members. "Then again, the cars are a lot better in some aspects than they were back in the day.

"The hardest part for me will probably be getting in and out of the race car," Thomas said, adding that he suffered a neck injury in a Daytona accident that sometimes pains him. "I'm going to wear a neck brace and everything and see how my neck holds up."

Thomas said he wouldn't mind starting up front, but he's not sure he needs too much of a boost.

"I was talking to Mike Farr of Genesis Shocks, and he said they oughta give me a two-lap head start, and I said, 'Damn Mike!' " Thomas recalled. "I feel real good about the race car and everything. Hopefully we'll be halfway competitive. We'll see. It'll be fun regardless."

DON'T LOOK NOW, BUT HERE COMES 2011: The book is nearly closed on the 2010 Dirt Late Model season, but USA Raceway in Tucson, Ariz., is planning its early-season kickoff in January with the fifth annual Wild West Shootout at the 3/8-mile oval. The track, promoted by Benji Lyons and Kevin Montgomery, plans a practice session and six complete racing programs over 10 days at the Jan. 7-16 event. The track is expected to run the same schedule as '10 with $3,000-to-win events on Jan. 8, 12, 14 and 15. The Jan. 9 event will pay $5,000 to the winner and the Jan. 16 finale, the Bill Cheesbourg Memorial, will pay $10,000 to the winner. Last year's event drew an average of nearly 50 Super Late Models including drivers Billy Moyer, Jimmy Mars, Terry Phillips, Jack Sullivan, Pat Doar and Eddie Kirchoff. — From staff reports

LAST YEAR'S WINNER SET FOR JAMBALAYA 100: Although it was in doubt until this week, it appears last year's Jambalaya 100 winner will be among entrants Nov. 12-13 at Pike County Speedway in Magnolia, Miss., the season finale on the O'Reilly Southern United Professional Racing tour. Chris Wall of Springfield, La., who recently underwent surgery to repair ligament damage to his right thumb, announcedï¿½ Monday he plans to enter despite the injury. Wall tripped and fell at Rome (Ga.) Speedway in October and injured the thumb, and sought medical attention a few weeks later, according to team reports. The surgery and treatment of the thumb left him with a cast that stretches up his forearm. The SUPR finale pays $5,000 to the winner and Rob Litton leads series points heading into the finale. — From staff reports

LONE STAR SPEEDWAY ADDS QUARTER-MILE: Lone Star Speedway is transforming the facility to add a quarter-mile oval within the existing half-mile oval at the dirt track in Kilgore, Texas. “We like tracks of all sizes, and part of the appeal of reopening Lone Star Speedway was to offer area drivers a big, wide open track to race at," track owner Sam Hafertepe said. "The reality is, the drivers in the area have equipment to compete on shorter tracks, but the majority of them don’t have the equipment to race regularly on a big track like this. We’re changing it to help accommodate their needs so every race team can come have a great night of racing at Lone Star Speedway — all season long.” The track will continue to run touring specials on the half-mile track, including the inaugural visit of the Lucas Oil Late Model Dirt Series, a $20,000-to-win event scheduled for April 1-2. The track's quarter-mile will debut Nov. 13 for a modified special, the fifth annual Dustin Duncan Memorial. Practice is scheduled for Nov. 12. — From track reports

ODDS AND ENDS: Southern Raceway in Milton, Fla., has scheduled the $5,000-to-win Topless 50 for Nov. 19-20. Super Late Models (running under Mississippi State Championship Challenge rules) will qualifying, run heats and a dash on Friday night, while consolations and the 50-lap feature are scheduled for Saturday night. ... Springfield (Mo.) Raceway has amended the tire rule for the Nov. 27 Turkey Classic. Late Models can used either the Hoosier WRS D-55s or LM-40s at the $2,000-to-win event.