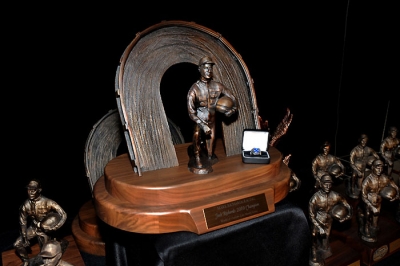 CONCORD, N.C. (Nov. 7) — Josh Richards experienced a very rewarding case of deja vu on Sunday night. As the 22-year-old sensation from Shinnston, W.Va., accepted the $100,000 World of Outlaws Late Model Series championship check, trophy and keepsake ring for the second consecutive season during the national tour’s banquet at the Great Wolf Lodge, he had to remind himself that the calendar had changed. | Video | Slideshow

“If feels like we were just here last year,” Richards said when he began his address to the attendees of the evening’s gala. “It’s pretty cool to get to come up here again."

Richards stood before the gathering as the first driver to win two titles in the seven-year modern era of the WoO, which was restarted after a 15-year-old layoff in 2004 under the World Racing Group banner. He clinched the prestigious crown 24 hours earlier just a mile away at the Dirt Track at Charlotte, where his fourth-place finish in the season-ending 50-lapper during the Lowes Foods World of Outlaws World Finals Presented by Bimbo Bakeries and Tom’s Snacks gave him a scant four-point margin over 2008 series champion Darrell Lanigan of Union, Ky.

More than $400,000 in points-fund cash and special awards was handed out during Sunday’s affair, which for the second year in a row was held immediately after the World Finals in conjunction with the World of Outlaws Sprint Car Series awards banquet. Awards ceremonies for each series were conducted simultaneously in separate rooms and then the evening concluded with teams and sponsors from both tours mingling at a post-banquet party.

Richards collected the lion’s share of the evening’s payouts, pushing his total series earnings to just under $300,000. He won a series-leading eight features and recorded 26 top-five and 37 top-10 finishes in 44 events en route to his second straight championship, an achievement he was almost at a loss to describe.

“Last year was a feat in itself to win (the title) after a tight points battle with (Steve) Francis,” said Richards, who debuted on the tour as a 16-year-old in 2004 before winning the 2005 Rookie of the Year award in his first full touring season. “But to do it two years in a row with Lanigan putting up one heck of a fight — it’s an incredible feeling, an incredible accomplishment.

“It wouldn’t mean anything if you weren’t racing anybody,” he continued. “These (WoO regulars) are the best guys in the country, so to be able to come out on top for the second year in a row shows how strong our team really is. I feel like I’m one of the luckiest guys to get to drive this blue No. 1 car.”

“You guys put up one hell of a fight,” Richards said as he directed his gaze toward Lanigan’s table. “You definitely made us work harder for it, and you guys definitely deserve to be standing up here as champions just as much as we do.”

Lanigan, who, like Francis, has served as one of Richards’s racing mentors, made a gallant bid to claim the title during the World Finals. He cut Richards’s edge from 22 to six points with a fourth-place finish in Saturday afternoon’s postponed 40-lapper and charged forward from the 21st starting spot to place third in the nightcap.

“We were just a little short,” said Lanigan, who would have captured the championship if had been able to win Saturday night’s feature with Richards finishing third or worse. “We got all we could get and Josh did all he needed to do to win it.

“It’s hard to believe that you run the whole year and come up two cars short. It’s hard to take, but that’s how it ended up. We work close together (with Richards) and both our cars were good all year, but they just had a little bit better luck.”

Lanigan received a check worth $60,000 for his runner-up finish in the points standings, putting his 2010 earnings over $260,000. It was his third straight top-three series finish, following his runaway championship season in 2008 and a third-place result in 2009.

Lanigan’s mechanical right-hand man, Randall Edwards, made his own appearance on stage as the winner of the 2010 WoO LMS Crew Chief of the Year award. Edwards, 36, earned the honor for the first time by vote of his fellow series crew chiefs and WoO officials.

Tim McCreadie of Watertown, N.Y., who returned as a series regular this season for the first time since his championship season in 2006, collected $40,000 for finishing third in the standings. He led the points race early in the season and battled with Richards and Lanigan throughout the summer before falling out of a serious contention late in the campaign.

Steve Francis of Ashland, Ky., received $35,000 for finishing fourth in the points standings while Rick Eckert of York, Pa., pocketed $30,000 for his second consecutive fifth-place finish.

Hubbard added $10,000 to his banquet take-home pay for winning the 2010 Rookie of the Year award. The fast-rising 18-year-old star drove car owner Dale Beitler’s No. 19 to two A-Main victories on his way to easily outdistancing Jill George of Cedar Falls, Iowa, in the rookie standings, which were determined using drivers’ best 30 finishes on the tour.

“I gotta thank Dale, Candi (Dale’s daughter) and the whole Beitler family for being behind me all year,” said Hubbard, who came to the banquet dressed in snazzy rented all-white suit with a light-blue vest and tie (Beitler’s familiar colors!). “They gave me a chance and it was a blast. I can’t thank them enough.

“I’m just happy to be up here getting awards and money for what I love to do.”

George — the first female driver to attempt following the tour — was also called to the stage to receive a $5,000 check for finishing second in the Rookie of the Year standings. She entered 37 of the season’s 44 events and finished 12th in the overall points race.

Russ King of Bristolville, Ohio, who finished 11th in the points standings, was the only driver who had perfect attendance on the 2010 tour but did not attend the awards banquet.

Rocket Chassis was recognized as the winner of the 2010 WoO Chassis Builders’ Challenge — the seventh straight year that the company has earned the nod. Ten drivers won WoO features using Rocket cars this season, giving the manufacturer 32 victories in 44 events.

Cornett Racing Engines in Somerset, Ky., was announced as the winner of the 2010 WoO Engine Builders’ Challenge. It was the third consecutive honor for company owner Jack Cornett, whose engines were under the hood of the cars driven by Richards, Lanigan and Hubbard.

WRG President Tom Deery announced that the 2010 WoO Promoter of the Year award was earned by Virginia Motor Speedway’s Bill Sawyer, whose top-notch facility has hosted a WoO event annually since 2004 and this year stepped up by inaugurating the $25,000-to-win Commonwealth 100.

VP Racing Fuels provided a pair of special awards, giving George, Doug Horton of Bruceton Mills, W.Va., and Tyler Reddick of Corning, Calif., certificates for 30 gallons of Late Model Plus fuel for winning the most VP Racing Fuels awards in 2010 and Richards $500 in cash as a bonus for capturing the championship.

Other special awards handed out during the banquet included:

• The DirtonDirt.com Hard Charger Award, a $500 check that went to Frank for picking up the most positions in WoO features this season. He advanced 170 spots, beating Fuller by 11 positions.

• The luck of the draw provided $1,000 cash prizes to McCreadie and Clint Smith courtesy of STP. McCreadie won the drawing among fulltime WoO LMS drivers who won A-Mains in 2010 while Smith had his name pulled from the group of regulars who did not reach victory lane this season.

Christman said the full 2011 WoO schedule will likely be released next month, but the season is scheduled to kick off with two programs on Feb. 17 and 19 during the 40th annual Florida DIRTcar Nationals by UNOH at Volusia Speedway Park in Barberville, Fla.