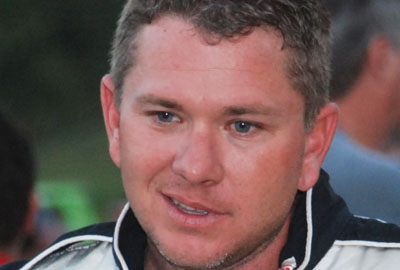 Injuries Boom Briggs suffered in a recent ATV accident weren't as serious as originally believed, but the 39-year-old Dirt Late Model racer's season is over after the accident caused him to miss Oct. 30's finale on the O'Reilly All Star Late Model Series.

"I have another concussion but everything is fine with my head," Briggs said in a phone interview from his Bear Lake, Pa., home. "I got a concussion a few years ago when we raced at Cornwall and when my brother seen that I was knocked out, a red flag popped up in his head.

"They airlifted me to Erie (Pa.) as a precaution but other than being pretty damn sore, everything is fine. I want to thank everyone for their thoughts and prayers after hearing about my situation, it means a lot to me knowing that so many people in the racing community care about not only me, but everyone that is involved in racing."

Briggs, who had an engine lock up at the Oct. 23 Steel City Stampede at Lernerville (Pa.) Speedway, but planned to wrap up his season Oct. 30 at K-C Raceway near Chillicothe. But the ATV accident changed those plans and he slipped to fourth in the final standings on the O'Reilly All Star tour. He's already looking forward to next season.

"This accident has a positive effect on me though," Briggs said. "I’ve got a lot of motivation for 2011 now, time to put 2010 in the past and focus on 2011. We have a brand new car at the shop that needs built and another one that is completely stripped and getting rebuilt.

"We want to head to Florida in February completely fresh, with all brand new equipment and get a great start to the year." — Jason Shank

FOUR NOV. 5-6 EVENTS CALLED OFF: The Ray Cook-promoted Tar Heel 50 weekend scheduled for Nov. 5-6 at Boyd's Speedway in Ringgold, Ga., and Cleveland (Tenn.) Speedway has cancelled because of forecasts for freezing temperatures. An agreement between Cook and track promoters was reached Wednesday morning and they're considering possible makeup dates. Another Nov. 5-6 weekend of races in central Kentucky, the Trick or Treat 100s at Ponderosa Speedway in Junction City and Lake Cumberland Speedway in Burnside, were also cancelled because of chilly forecasts. — Chris Tilley and Michael Despain

UFO SERIES GETS JUMP ON 2011 SEASON: The UFO Race Championship Series has tentatively scheduled 14 races of an 18- to 20-race scheduled for the 2011 season along with announcing other minor changes for the tour's fourth season. The series is beefing up purses, including providing all non-qualifying drivers $150 at each event. The series also plans spoiler rule adjustments for different engine packages. In a change of the selection of provisional starters, it will be determined by the highest driver in series points, instead of attendance and consolation race finishes. The UFO season opens March 26 at Mercer (Pa.) Raceway Park. Other tracks back on the schedule are Tyler County Speedway in Middlebourne, W.Va.; Pittsburgh's Pennsylvania Motor Speedway; Thunder Valley Raceway in Central City, Pa.; Roaring Knob Motorsports Complex in Markleysburg, Pa.; and Dog Hollow Speedway in Strongstown, Pa. — From series reports

MOURNING PEARSON TO PARTICIPATE IN FUND-RAISER: Four-time Lucas Oil Series champion Earl Pearson Jr., who dedicated his recent Dirt Track World Championship victory to his ailing mother, is participating in an upcoming fund-raiser for the Alzheimer's Association in his hometown of Jacksonville, Fla. Gloria Pearson died Oct. 27, just 11 days after Pearson's $50,000 DTWC victory. Earl and wife Missy have signed up a team for Memory Walk 2010 to benefit the Alzheimer's Association. The charity walk is scheduled for Nov. 13. Those wishing to make donations to Earl and Missy's team can visit www.mwjax2010.kintera.org. To make a donation enter Melissa Pearson and the team "Earl Pearson Jr. Inc." will come up to accept donations for the charity walk. — James Essex

TWO ARKANSAS TRACKS JOIN NeSMITH CHEVROLET SERIES: Two Arkansas dirt tracks have joined the NeSmith Chevrolet Weekly Racing Series as the Crate Late Model organization looks to develop a new region. Drew County Speedway in Monticello and Centerville Speedway help set the foundation for a region that could pay the champion $5,000 in 2011. In 2010, Batesville Motor Speedway was the only Arkansas track with 27 registered drivers. “The Arkansas drivers felt they were at a disadvantage in competing for a regional championship because they would have to travel to Mississippi to compete at other tracks in the West Region," said series director Roby Helm. NeSmith Chevrolet officials are hopeful Batesville continues with the organization in 2011. — From series reports

ODDS AND ENDS: Quincy (Ill.) Raceway is shaping the 3/8-mile oval's racing surface, cutting down the banking in the corners to slow racers in the high groove. The track also announced that Doug Mealy, a former Late Model driver, is returning to the announcer's booth after serving as chief steward in 2010. ... Chris Garnes will be honored as the American Motor Racing Association Super Late Model champion Nov. 13 at the postseason banquet in Ripley, W.Va. Visit the series website at amramodified.com for details. Ticket orders are required by Nov. 8. ... Brandon Hardgrove, promoter of Lake Cumberland Speedway in Burnside, Ky., will also be promoting Ponderosa Speedway in Junction City, Ky., in 2011, the tracks announced.