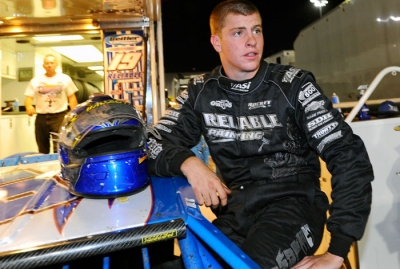 Austin Hubbard is WoO's 2010 Rookie of the Year. (thesportswire.net)

Austin Hubbard would love to close his unprecedented rookie season on the World of Outlaws Late Model Series with a triumph during the Nov. 4-6 Lowes Foods World of Outlaws World Finals Presented by Bimbo Bakeries and Tom’s Snacks at the Dirt Track at Charlotte.

With a sold-out crowd packing the track’s massive grandstand, the teenage sensation from Seaford, Del., knows he would have a huge stage for one of the unbridled victory celebrations that have become his trademark. | WoO points chase

“I just want to win the race first,” said Hubbard, who has already clinched the 2010 WoO Rookie of the Year award. “But if we can pull it off, I’m sure there will be a lot of celebrating. I don’t know what I’d do, but it would be fun.”

Hubbard is the first driver in WoO history to win twice in his rookie season, but he's had his share of hard knocks, slumping in the dog days of summer without a top-five finish in the nine races contested in August. The 18-year-old took the struggles in stride, realizing that his rookie season wasn’t going to be a joy ride from start-to-finish.

The Dale Beitler Motorsports driver enters the World Finals with 11 top-five finishes (sixth best on the tour) while starting all 42 races and appears headed to a seventh-place finish in the points standings, the highest ranking ever for a rookie on the series. With the tour’s rookie award determined using candidates’ best 30 finishes, Hubbard easily clinched the $10,000 prize over Jill George of Cedar Falls, Iowa, who never finished better than 14th.

“I’ll take the year we’ve had and try to figure out what we need to do next year to get better and win more races,” Hubbard said. “Rookie of the Year was the obvious goal from the start and we’ve accomplished that and we’ve got two wins right now, so I can’t complain. I wish we would’ve run better toward the end of the year, but we’ve had a pretty good year.

“I definitely expected to struggle where we have been struggling. Drier tracks are hard for me; I’m still learning about driving straight, but it’s definitely gotten better. Getting to watch these (WoO) guys and how they handle certain situations has definitely helped me all year, and because of that we’ve had some good runs in conditions that aren’t apt to the way I drive so I’m pretty happy with that. ...

“Pretty much every night out this year I’ve had the feeling I should’ve done something different,” he added with a laugh. “There’s races where it cost us more than others, but that’s the only way you learn. You have to do it. Hopefully I can capitalize on the things I’ve learned and not make the same mistakes in the future.”

Hubbard will attempt to end his season on a high note this weekend at Charlotte, a high-banked, 4/10-mile oval that’s been tough on him. He’s entered all three previous World Finals but has yet to qualify for a feature; his three career feature-event starts show finishes of 18th (last month’s World of Outlaws Late Model Showdown), 19th (2009 Colossal 100) and 25th (2009 Showdown).

“I like the place and I like the speed of it,” said Hubbard. “I always love to drive on it, but I don’t know if I always love to race on it. You’re not always sure what you’re gonna get and we’ve always struggled there trying to figure it out.” — Kevin Kovac

SCHEDULES MOVED UP ONE HOUR: Track officials announced today a change in the schedule for this weekend's Lowes Foods World of Outlaws World Finals. Gate openings and hot laps have moved up one hour ahead of their originally scheduled times on Friday and Saturday. Thursday, gates will open at the originally scheduled time, but hot laps will be moved up one hour. Spectator gates open at 4 p.m. Thursday with hot laps at 5. On Friday and Saturday, spectator gates open at 3 p.m. with hot laps at 4 p.m. Besides Late Models, World of Outlaws Sprint Cars and Super DIRTcar Series big-block modifieds are also in action. — From track reports

MONTGOMERY MAKING CHARLOTTE DEBUT: Fresh off a career-high $5,000 victory at Ohio's K-C Raceway, Jason Montgomery of Jackson, Ohio, plans on racing for the first time at Charlotte this weekend. Montgomery has purchased racing equipment from Heintz Performance in Concord, and Steve Heintz has long encouraged the 36-year-old to visit the oval that's across the highway from one of NASCAR's most famous tracks. "The other day he called me and said, 'Well Montgomery, you've got a little bit of money, you coming down or not?' And I said yep, I'll be down there this weekend," Montgomery said. "I think it kind of shocked him. I don't think he thought I'd come down there and race." — Todd Turner

FRANK HOPES TO TURN THINGS AROUND: Chub Frank of Bear Lake, Pa., is still looking for his first WoO victory in 2010, and he'll try to get it at a track where he's run into plenty of trouble. Frank rode out the first flip of his three-decade career at Charlotte's 2008 Colossal 100, and he had to sit out last year’s World Finals after his cheek and orbital bone were fractured by an apparent clod of hard-packed clay that struck his helmet during a heat race. “Charlotte hasn’t been very good to us, but hopefully we can go there and end the year on a good note,” the 48-year-old Frank said. “This season hasn’t gone the way we would’ve liked so it would be nice to go into the winter with a good run.” Frank stands ninth in WoO points and hasn't competed since an 11th-place run at Charlotte on Oct. 13. — From team reports

ODDS AND ENDS: Rookie Late Model driver Ricky Thornton Jr. of Chandler, Ariz., who wrapped up his championship on the Total Seal Late Model Dirt Racing Series on Oct. 30, is among first-time drivers expected at Charlotte. ... The track expects fans from 48 states, eight Canadian provinces, the United Kingdom, Australia and New Zealand to be among fans at the event. Representatives from each state, province and country will carry their respective flags during Saturday's pre-race festivities. ... With several French Canadian competitors expected, a safety worker fluent in French will be stationed in the infield, in addition to a translator in the grandstand and pit area who will be available for those who may need assistance. ... Speed's telecast of Saturday's action will mark the first-ever World of Outlaws race covered in HD. The four-hour live telecast will begin at 8 p.m. EDT.