Richards-Lanigan duel comes down to Charlotte 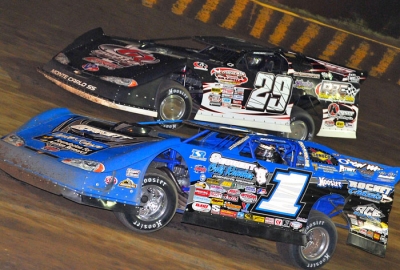 Josh Richards (1) and Darrell Lanigan (29) are battling for the WoO title. (thesportswire.net)

The stage is set. The battle lines are drawn. Josh Richards and Darrell Lanigan are ready to conclude their dramatic chase for the 2010 World of Outlaws Late Model Series championship on Nov. 4-6 during the Lowes Foods World of Outlaws World Finals Presented by Bimbo Bakeries and Tom’s Snacks at the Dirt Track at Charlotte. | WoO notebook | World Finals blog

The question: Who has the advantage at the high-banked 4/10-mile oval?

The statistics would seem to favor Richards, the 22-year-old sensation from Shinnston, W.Va., who leads the WoO standings by 22 points over Union, Ky.’s Lanigan entering the season-ending World Finals spectacular. Richards, after all, has three victories, seven top-five and 10 top-10 finishes in the 13 WoO events contested since 2007 at The Dirt Track, while Lanigan’s more modest performance record covering the same races shows no wins, five top-five and seven top-10 finishes.

But numbers don’t necessarily tell the story in the Richards-Lanigan showdown, which has a $100,000 champion’s prize riding on its result. Richards, the defending WoO champ, knows history won’t be the determining factor in the razor-close points race.

“Anything can happen at Charlotte,” said Richards, who won the tour’s last event at Charlotte, the World of Outlaws Late Model Showdown on Oct. 13, for his series-leading eighth triumph of 2010. “We’ve had a little more success there than Darrell, but he’s also had some bad luck. He’s had a great year and he’s going to be ready, so we have to go there and fight for every position.”

Richards certainly has no reason for a lack of confidence at Charlotte, a fast racetrack that has been very good to him in WoO competition. His first two series starts there resulted in DNFs — he finished 28th in the 2007 Colossal 100 after power-steering trouble forced him out on lap 25 while running second and placed 20th in the 2007 Showdown due to race-ending suspension damage his car sustained from hitting the cushion after he had exploded from the 21st starting spot to the lead in just nine laps. But since then he’s finished outside the top 10 just once. He owns third-place finishes in the Colossal 100 in 2008 and 2009; two victories (2010 and 2009) and a sixth-place run (2008) in the Showdown; and World Finals outings of fifth and 11th (2007), 10th and first (2008) and fifth and seventh (2009).

Consistent strength permeates Richards’s record at Charlotte. He has two fast-time honors and an average time-trial result of 9.33 in the 12 WoO events that have utilized qualifying (a pill-draw format was used for the 2007 Showdown) and has won a heat race four times. He’s failed to qualify through a heat just once in 13 tries — a broken driveshaft on the opening lap of a heat during the 2007 Showdown forced him to run a consolation race, which he won.

“I’ve always loved racing at Charlotte,” said Richards, whose three career victories ranks him behind only Scott Bloomquist (six) and Chris Madden (four) on Charlotte's all-time dirt Late Model victory list. “It’s a place that just sort of fits my style. I like momentum tracks and that’s how you have to run Charlotte.”

Lanigan, 40, can’t match Richards stat-for-stat. Not only has he never reached victory lane at Charlotte, he also has an average time-trial placing of 19 (he set fast time for the first night of last year’s World Finals but has qualified as poorly as 50th, 55th, and 61st in the past); has failed to transfer through a heat race three times; and has led laps in only one feature (Richards has led four events).

Nevertheless, Lanigan has flashed plenty of speed there. In fact, few drivers have passed as many cars as he has without collecting a checkered flag for their effort.

On two occasions Lanigan has made spectacular charges through the pack. In the 2007 Showdown he started 28th after using a provisional to get in the 50-lapper, but by lap 17 he was in second place and looking like he might become just the second driver in WoO history to win a feature from last in the field; he couldn’t overtake eventual winner Shannon Babb, however, and fell to third on the final lap. Two years later, in the 2009 Colossal 100, he was forced to pit with a flat left-rear tire on lap 12 and then roared all the way back on a challenging, sun-baked afternoon surface to finish a career-best second at Charlotte.

Tough breaks have been all too common for Lanigan at Charlotte, starting with the first WoO event, the 2007 Colossal 100, when he started from the pole position and led laps 1-3 before a flat right-rear tire forced him to the rear of the field. His list of misery also includes the first feature of the 2007 World Finals (finished 11th after pitting to change flat tires on laps 23 and 32); the 2008 Colossal 100 (was running a strong second on lap 90 when his car’s rear end broke); the 2008 Showdown (engine failure forced him out as he ran third on lap 34); and his most recent visit Oct. 13 for the Showdown, which he finished in the 12th position after an early-race scrape with Eddie Carrier Jr. cut his car’s right-front tire and caused him to pit on lap 13.

Lanigan’s 12th-place finish in last month’s event cost him the WoO points lead to Richards, who turned a two-point deficit into a 22-point edge. That means Lanigan, who trailed Richards by as many 78 points in early July, will likely need his best World Finals performances ever to win the series title for the second time in three years, but the seven-time winner on the 2010 tour is primed for the challenge.

“We haven’t had much luck at Charlotte over the years, but I know we can get the job done there,” said Lanigan, whose World Finals log shows finishes of 11th and fifth (2007), 11th and seventh (2008) and two fourths (2009). “I like big tracks like Charlotte and we’ve run good there several times. Hopefully we have our bad luck behind us (after last month’s Showdown) and we’ll be able to race it out.

“We’re probably gonna have to win or finish right up front if we’re gonna beat Josh (for the championship), so our focus will be on winning the races. That’s all we can do.”

Though Lanigan has been a WoO regular since 2004 and Richards a steady traveler since 2005 and both drivers have won championships, it’s Richards who has the advantage when it comes to experience running the season finale under the glaring pressure of a close points race. While Lanigan needed only to start the first feature of the 2008 World Finals to salt away his title — he won the crown by a then-record 160 points — and hasn’t gone into a season-ending race with a shot at the championship since 2006 (he had only flickering hopes that year sitting fifth in the standings, 46 points behind), this will be the third straight year Richards enters the World Finals with a big-money points finish on the line.

In 2008 Richards entered the World Finals ranked fourth in the standings (26 points behind second second-place Steve Francis) but hopped over both Francis and Clanton with a 10th-place finish in the first feature and clinched a $60,000 runner-up finish in the points with a clutch victory in the nationally-televised finale. Last year, meanwhile, he sat four points behind leader Francis in the standings heading to Charlotte but went four points up following a fifth-place finish in Friday feature — a finish he earned in dramatic fashion after rallying from a flat right-rear tire that forced him to relinquish third place on lap 43. Richards closed out his milestone championship with a seventh-place finish in last year’s World Finals finale, staying several spots ahead of Francis throughout the distance.

Will Richards’s experience with his father Mark’s Rocket Chassis house car team help him come out on top of a hotly-contested points battle under the bright lights of the World Finals for the third year in a row? In his mind, the past will be immaterial.

“I’ve been through it the last two years, but that won’t change how we approach this year,” said Richards, who has effectively been in a one-on-one race for the championship with Lanigan since 2006 titlist Tim McCreadie of Watertown, N.Y., slipped more than 80 points behind the lead duo with a DNF on Sept. 5 at Pennsylvania’s Tri-City Speedway (McCreadie remains mathematically alive for the title at 94 points behind Richards but needs both Richards and Lanigan to have two disastrous outings). “Maybe there’s a little more pressure on you when the points come down to the last race, but Darrell’s been around a long time and he’s not going to let any pressure get to him.”

The Lowes Food World of Outlaws World Finals, which also feature the WoO Sprint Car Series and, for the first time, the Super DIRTcar Series big-block modifieds, begin on Thursday, with a big qualifying night featuring two rounds of Late Model and Sprint Car time trials and two sets of modified heats. The Late Models will compete in a 50-lap features Friday and Saturday. Saturday’s racing program will be broadcast live on Speed starting at 8 p.m. EDT.