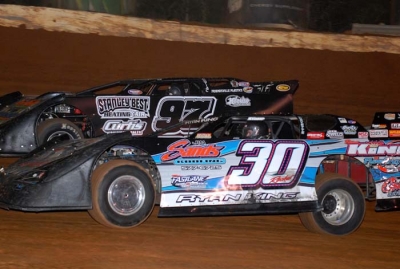 The 19-year-old King protested the polesitting Giffin's engine following the race, and when Giffin refused to tear down the powerplant, he was disqualified, handing the $2,500 winner's purse to King. Track champion Josh Collins was listed second in the official rundown followed by Rusty Ballenger, Brad Lowe and Clyde Stanton. Mark Vineyard ran in the top five in the race's late stages but dropped out.

Outside front-row starter David Crabtree took the lead at the outset over Giffin with King, Ballenger and Greg Martin in pursuit.

After a lap-nine caution for Pierce McCarter’s turn-four spin, Crabtree once again pulled away from Giffin while King pressured the second-running driver.

Jason Cardwell slowed on the 21st lap to draw the second caution, and Giffin battled Crabtree up front exiting turn two on the restart. Crabtree slowed four laps later, handing the lead to Giffin at the halfway point after brief contact among the leaders.

On the restart, Giffin surged ahead of King by four lengths, but King quickly closed back in on the rear deck of Giffin. King pressured Giffin for the lead, but Giffin held his line and kept the lead.

Giffin maintained his lead through a series of cautions, including the final yellow on lap 42. King was right with Giffin in the final laps, making slight contact in turn four and nearly losing control before gathering his car up. Giffin took the checkers first but he was deposed after the race.