From track, series and special reports 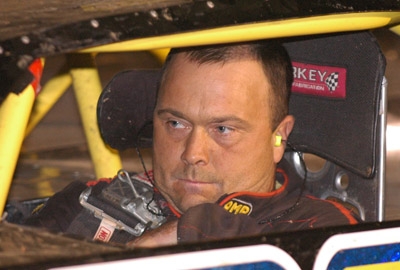 Jimmy Schram is purchasing Willamette Speedway along with his brother Jerry. (Steve Reeck)

A boost in sponsorship has increased the purse for this weekend's Delaware State Dirt Track Championships at Delaware International Speedway in Delmar.

Insinger Performance, a distributor for Sunoco Race Fuels, has stepped up to make the purse for the Oct. 22-23 event even more attractive by adding to the Late Model and Small Block totals.

Besides the Super Late Models and modified divisions, Crate Late Models will be among other divisions in action. For more information, see www.delawareracing.com. — Charlie Brown

SCHRAMS PURCHASE WILLAMETTE SPEEDWAY: Willamette Speedway in Lebanon, Ore., a stronghold for Dirt Late Model racing in the West, will soon have new owners, track owners Bill and Lori Arnold told the Lebanon-Express newspaper. Brothers Jimmy and Jerry Schram of Vancouver, Wash., who race Late Models as well as co-own two dirt tracks and operate the DAA Northwest Crate Late Model Series, are expected to take over the 46-year-old track by the end of the season. "Clair, Bill and Evelyn have done a great job with this and to continue running this track would just be an honor," Jimmy Schram said at the track's Oct. 23 banquet. "It is very important to us that we keep that family atmosphere and we are definitely going to do our best to keep that going." Chris Nofzinger, the Arnold's 26-year-old son-in-law, will continue and take over as Willamette's operation manager, the newspaper reported. — Lebanon-Express

GET A SCARE AT LUCAS OIL SPEEDWAY: High speeds or wrecks might throw a scare into spectators normally at Lucas Oil Speedway, but it'll be ghosts and goblins doing the trick on Oct 30 at the Wheatland, Mo., track. The fourth annual Safe Trick or Treat Night turns the oval into Lucas Oil Spookway and provides a venue for children and parents to enjoy a free night of trick or treating. Last year, more than 400 trick-or-treaters visited the track to enjoy booths, raffles, prizes, merchandise and candy. For information or booth registration, call (417) 282-5984 or email Cheri Boehler at cheri@lucasoilspeedway.com. — From track reports

BRUSHCREEK GETS JUMP ON 2011: Brushcreek Motorsports Complex in Peebles, Ohio, has added an additional Late Model special for 2011 in announcing its major race dates for next season. The track plans a Thursday-Friday event on July 7-8 leading up to the NASCAR Sprint Cup debut at Kentucky Speedway, the $10,000-to-win Hidden Gem 50. The track's Billy Bob event is scheduled for Sept. 30-Oct. 1 with winning purses for double features rising to $10,000 apiece. — Steven Partin

SWAINSBORO GETS READY FOR CRATE BIGGIE: Swainsboro (Ga.) Raceway is preparing for the 10th edition of the Turkey 100, which this season will including a $20,000-to-win event for Crate Late Models. The race — presented by Aaron’s Rentals, Daniel’s Chevrolet and Coca-Cola — will headline Nov. 25-27 action at the Paul and Debra Purvis-owned track. More than $51,000 in Crate Late Model prize money will be put up over the course of the three-day event. Entry fees are $175 if postmarked by Oct. 31 and $225 thereafter. For more race information, see www.swainsbororaceway.com. — From track reports

ODDS AND ENDS: Long-time Dirt Late Model sponsor Dick Schofield of Peoria, Ill., died Oct. 17 at a Peoria hospital. He was 66. .... Two central Kentucky tracks have moved their Trick or Treat 100 weekend back a week to Nov. 5-6. The $3,000-to-win events are scheduled for Nov. 5 at Ponderosa Speedway in Junction City, Ky., and Nov. 6 at Lake Cumberland Speedway in Burnside, Ky. ... Billy Moyer Jr. of Batesville, Ark., has announced the addition of sponsorship from Henderson Motorsports and L&D Trucking. The Laurel, Miss.-based sponsors already sponsor the team of Moyer's father.