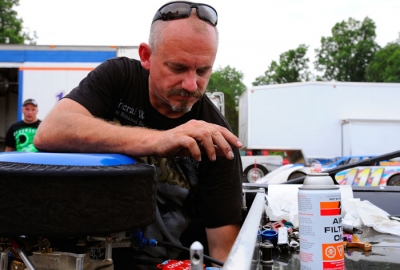 Scott Sexton's racing career has been mostly on the back burner in recent years, but the Pigeon Forge, Tenn., gets another chance to shine Saturday at the fourth annual O'Reilly Auto Parts National Steel-Head Championship at 411 Motor Speedway in Seymour, Tenn.

The $2,500-to-win event is expected to draw the region's top steel-head engine Late Model drivers for the Oct. 23 event at the 3/8-mile clay oval, which hosts its richest event since returning to dirt from an asphalt surface in 2007. | Slideshow

Sexton won last year's version of the event, outdueling Anthony White for a victory at a race that drew 43 Late Models. Big-purse victories were common for Sexton 10 years ago in east Tennessee, but a variety of circumstances have kept him out of the limelight during the prime of his career.

"Me and my dad, Howard Sexton, owned our own equipment," Sexton said. "He was sick for years fighting lung cancer and we couldn't keep going. He got to where he couldn't go to the races any more so in 2002 we sold our stuff. I've just sparingly drove other people's cars since then."

Over the past year or so Sexton has seen more action behind the wheel. Teaming with a Seymour businessman, the 44-year-old driver has acted as driving coach for up-and-coming racer Ryan King. And Sexton has piloted a Brian King Roofing car of his own in that time as well.

Originally Sexton planned to compete for a full season on the dirt tracks of east Tennessee, but health issues that have plagued him in recent years put a damper on those plans. Sexton suffers from Factor V Leiden thrombophilia, an inherited disorder which increases the risk of blood clotting.

"I didn't find out about it until just a few years ago," Sexton said. "I've had seven operations since 2007. Blood clots form in my lungs that cut down on my breathing. It's a little hard to get up on the wheel when you can't breathe."

Medication and a proper diet have helped alleviate the symptoms.

"I've actually felt better lately than I've felt in two years," Sexton said. "I have to give myself a shot in the stomach everyday and I have to stay away from Vitamin K, which means I can't eat green stuff."

But when Sexton's able to drive, he's shown few negative effects from his health problems. After being out of action for three months earlier this year, he won a feature race at the 411 Motor Speedway in a car he had never driven before.

"We've won five of the seven races we've been in this year at 411," said Sexton, who has served on West Virginia driver John Blankenship's crew in recent years. "And we've won races at Tazewell and Boyd's as well. Altogether we've run 11 races this year and won seven of them."

He'd like to add another with a repeat of his O'Reilly Steel-Head Championship victory from '09, when he outran White of Clinton, Tenn.

"That was a good race," said Sexton, who hopes his health improvement allows him to return to racing full time. "Me and Anthony are good friends and it was good for two old codgers to battle like that."

Sexton and White will have plenty of competition in Saturday's event. Josh Collins, 411 Late Model track champion for 2010, has won 13 races at 411 and will be among the top competitors along with Jason Cardwell, Bobby Giffin, David Crabtree, Greg Martin and more. Promoter Chris Corum and track owner Mitch McCarter are anxious to host the event.

"We're really excited about this race," Corum said. "The response we are getting on this race is unreal. I've been taking calls from drivers in the Carolinas and Georgia wanting information on the race. We're looking for a really big crowd both in the grandstands and in the pits."

The format includes a $100 bonus for the fast qualifier. The top six qualifiers run a fast dash that pays another $100 and the rest of the field will attempt to make the feature through heat races to determine starting positions 7-18. The final two spots for the 20-car field will come from consolation races. For more information, see www.411motorspeedway.net or call Corum at (865) 604-4062. — Richard Allen and Michael Moats

The tight battle for the 2010 World of Outlaws Late Model Series points championship won't be the only mathematical drama that plays out during the World Finals on Nov. 4-6 at the Dirt Track at Charlotte.

While Josh Richards and Darrell Lanigan will fight it out on the track in search of the $100,000 World of Outlaws title, a separate season-long contest among the national tour's regulars will come to a conclusion in the pit area. The winners of the inaugural Raye Vest Memorial Pill Draw Awards will be determined during the 4/10-mile oval's blockbuster weekend, which also features the World of Outlaws Sprint Car Series and the Super DIRTcar Series for big-block modifieds.

The unique competition — named in honor of late team owner Raye Vest and sponsored by McCarthy's One Hour Heating & Air Conditioning in Omaha, Neb. — rewards the WoO Late Model travelers who end the season with the best and worst averages in the nightly pill draws for time-trial positions. Each driver will receive $500 for their good (and bad) luck in a pre-race pursuit that was a favorite of Vest, who spent 15 years fielding cars for WoO star Rick Eckert of York, Pa., until his November 2009 death.

"Raye always loved the pill draw — that was his thing," said Eckert, who ran all 237 WoO LMS events contested from 2004-2009 in equipment owned by Vest. "When he was at a race he'd go to the (series) trailer and when he came out you would immediately know if he drew a good or bad number just by looking at his face. And if he didn't make it to a race, he'd call me before the night started and the first thing he'd say was, 'What number did you draw?' "

In a nod to Vest, WoO announcer Rick Eshelman adorned the canister used for this year's qualifying pill draws with a Raye Vest Memorial decal and painted it in Vest's familiar orange and black colors. John McCarthy Sr., a longtime sponsor of three-time WoO champion Billy Moyer through his McCarthy's One Hour Heating & Air Conditioning business, signed on to provide a financial reward for the series regulars who picked the best and worst numbers from that can over the course of the season.

"I can't think of doing anything better than this to remember Raye Vest," said McCarthy, who knew Vest well. "Every time there's a pill draw, we think of one of the sponsorship giants in our sport."

Watertown, N.Y., drivers Tim Fuller and Tim McCreadie head into the World Finals in the driver's seat for the $500 Raye Vest Memorial Pill Draw Awards. Fuller owns the best (lowest) pill-draw average at 28.2, while McCreadie has the worst (highest) average at 45.6. — Kevin Kovac

The Alabama racing community is mourning the death of veteran driver Jerry Goodwin of Wilsonville, Ala., a popular short track racer. He was 67. Goodwin, most recently a regular competitor in the NeSmith Chevrolet Weekly Racing Series late model division at Talladega Short Track in Eastaboga, AL, died Oct. 20 after a lengthy illness.

Goodwin was a standout driver at Alabama short tracks on both dirt and asphalt for many years. In 2009, his last season of competition, Goodwin finished ninth in the NeSmith Chevrolet Weekly Racing Series East Region point standings with four victories, 10 top-five finishes, and 13 top-10 finishes in 16 starts.

"I had the pleasure watching Jerry Goodwin compete on both dirt and asphalt through the years, and it didn't matter if it was the big paved 5/8-mile Birmingham Fairgrounds or the small quarter-mile dirt Hornet's Nest at Talladega Short Track, Jerry was fast and a winner at both places," said Roby Helm, director with the NeSmith Chevrolet Weekly Racing Series for crate engine Dirt Late Models. "I think Jerry Goodwin was probably the most underrated driver to come out of Alabama because he didn't travel much and gain the same notoriety as the Allisons, Neil Bonnett, Red Farmer, Darrell Brown and Dave Mader III, but he was just as good as they were."