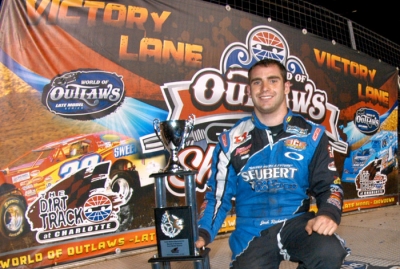 Richards turned a two-point deficit to Darrell Lanigan of Union, Ky., into a 22-point lead in the event that kicked off Bank of America 500 week at Charlotte Motor Speedway. As Richards raced off the outside pole starting spot to pace the entire distance, Lanigan was slowed by a right-front flat tire on lap 13 and managed only a 12th-place finish after restarting at the rear of the field.

The $100,000 WoO championship prize will be determined with the season-ending pair of features during the World Finals on Nov. 4-6 at the track which boasted a fast, smooth surface Wednesday.

“It’s unfortunate that Lanigan had some bad luck tonight, but there’s still a long way to go,” said Richards, who earned $10,675 for his series-leading eighth triumph of 2010. “We gotta come back here for the Finals and race hard. You can lose a lot of points in one night, so we just gotta try to stay consistent and stay focused.”

Richards was on his game in the Showdown, staying in front of McCreadie to win the Showdown for the second straight year and score his third career triumph at the four-tenths-mile oval. It was his 28th career victory on the WoO — tying him with Steve Francis of Ashland, Ky., as the national tour’s winningest driver since 2004 — and moved him closer to a second consecutive Outlaw title.

McCreadie, 36, settled for second place in the Sweeteners Plus Rocket, crossing the finish line one length behind Richards. Mike Marlar of Winfield, Tenn., scored a career-best WoO finish of third after starting seventh in Sanford Goddard’s Warrior house car, while sixth-starting Earl Pearson Jr. of Jacksonville, Fla., was fourth in the Bobby Labonte Motorsports MastersSbilt and Steve Shaver of Vienna, W.Va., charged forward from the 21st starting spot to place fifth in the K&L Rumley Rocket.

Richards put himself in position for his critical victory with a dramatic heat-race performance. He came on after a mid-race restart to win the second heat by inches with a last-turn pass of Dallas, N.C.’s Jeff Smith.

“We struggled in qualifying with some carburetor issues,” Richards said. “We got that fixed, though, and in the heat race the car was phenomenal. The Cornett power really worked well for us in the heat. We were able to stick around that bottom and get by those guys.

“I think that was the key to winning tonight, getting in the redraw and getting a good spot. We drew the outside pole and I knew it was pretty much our race to lose. We’ve run well here in the past, so I knew if we could get out front and get rolling we’d be in good shape.”

Richards had to withstand some serious pressure from McCreadie, whose advance from the ninth starting spot reached second place when he swept around the outside of both Marlar and Dale McDowell of Chickamauga, Ga., on a lap-13 restart. McCreadie had several high-groove bids to grab the lead thwarted by Richards, who built a 10-length edge on McCreadie following a restart on lap 22 but maintained a more modest edge after the race’s fifth and final caution flag flew on lap 42.

“It’s good to be leading, but you don’t know where anybody’s running,” said Richards, who has an opportunity to tie or beat the WoO single-season win record of nine set in 2004 by Scott Bloomquist. “I kept watching the scoreboard, and once I saw McCreadie was second and I could kind of hear him on the outside I moved up (on the track).

“I ran the top of one and two and the bottom of three and four, just trying to keep my momentum up. I know (McCreadie) wasn’t very happy about it — he thought I was racing him dirty — but when you’re on a track like this and you’re running the bottom you don’t stay on the bottom because you gotta keep your momentum up.

“I knew he was there but I didn’t know how close, so I just tried to take his line away. It’s called racing.”

McCreadie drew close to Richards’s rear bumper during the final circuits but fell short. He was disappointed after absorbing his seventh runner-up finish of 2010.

Richards, meanwhile, wore a big smile after his triumph, which he credited to his well-oiled team.

“Everybody did an awesome job: my dad, Matt (Barnes), Jimmy (Frye),” Richards said. “Even (NASCAR star Tony) Stewart — he was in the pits scraping mud before the race and I guess he put the magic touch on it for us.”