Lanigan aims to maintain his slim lead at Charlotte 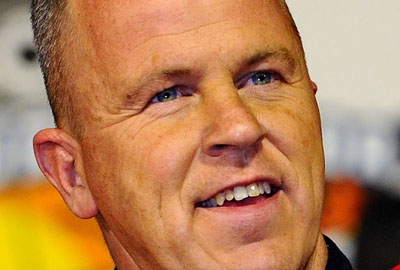 With only three events left in the World of Outlaws season, Lanigan holds a mere two-point lead in the standings over defending series champion Josh Richards of Shinnston, W.Va.

Lanigan and his nomadic brethren will take to the lightning-fast 4/10-mile clay oval to compete for the $10,000 winner's purse.

"I like the Dirt Track. It's a nice, state-of-the-art facility," Lanigan said. "The track is usually in pretty good shape. They usually keep it pretty wet. Here lately it hasn't been rough or anything, I think it has been pretty good racing."

Lanigan started racing in 1988 at Florence Speedway, a dirt track located only a few miles from his home. He picked up one victory there during his rookie season in a Dirt Late Model. After that, he began to slowly work his way up the proverbial racing food chain in search of more competition.

Between 1996 and 2001, Lanigan decided to try something new. He made 17 starts on the ARCA Series and four on the NASCAR Nationwide Series with little or no sponsorship.

Despite the lack of funding, Lanigan achieved mild success in ARCA competition, collecting four top-five and nine top-10 finishes. His only career ARCA pole came at Charlotte Motor Speedway in 1998.

While he may not have made it big in NASCAR, Lanigan has done pretty well for himself on the dirt tracks of America. Every year since 2004, Lanigan has visited victory lane at least twice in World of Outlaws competition and in 2008 he led the series with 25 top-five and 36 top-10 finishes, including a series-record 15-consecutive top-five runs during the summer months.

That consistency was enough to earn Lanigan his first World of Outlaws Late Model Series championship by a series-record 160 points over second-place Richards.

A few years removed from that championship season, Lanigan has a shot to win his second series title. He has already eclipsed his career-best victory total with seven victories so far this season, and he is hoping to leave Charlotte on Wednesday with another trophy to add to his ever-growing collection.

With a good run, Lanigan might gain the momentum he needs to win a second championship heading into the World Finals on Nov. 4-6, also at Charlotte.

"Any time we go there we definitely want to run good," Lanigan said. "Right now our points are getting kind of tight anyway. Every race we've got to look to do good and try to gain some points."

In order to claim his second title, Lanigan will have to beat his two top competitors this season, Richards, and Tim McCreadie, the 2006 series champion. With only a few points separating them, the championship may not be settled until all three men cross under the checkered flag at World Finals.

In addition to WoO action on Wednesday, NDRA-sanctioned Crate Late Models will also be in action in a 30-lap, $2,000-to-win feature.

Gates open at 5 p.m. with drivers participating in an autograph session from 5-5:45 p.m. on the main concourse. Hot laps are scheduled for 6 p.m. with opening ceremonies at 6:50 p.m. The World of Outlaws Late Model Showdown is scheduled to start at 8:45 p.m. For more information, see charlottemotorspeedway.com.