Notes: Another hoop for Franklin on Clash tour 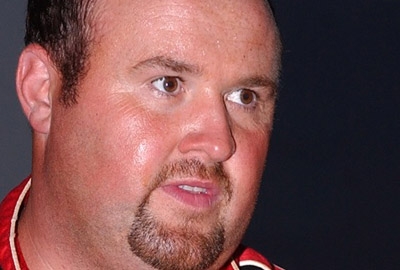 With Dirt Late Model tours adding dates and shuffling schedules throughout the season, the season's never over until it's over. That's what Dennis "Rambo" Franklin of Gaffney, S.C., has found out on the Carolina Clash Super Late Model Series.

Franklin has led the points chase most of the season on the Larry Lee-promoted tour, and initially he thought the tour would wrap up in November. But the series recently added the Nov. 13 Jack Starrette Tribute at Fayetteville (N.C.) Motor Speedway, meaning Franklin has more than a month before he can finally clinch his first Clash championship.

Following Saturday's event at Fayetteville, Franklin has a 40-point edge on Dean Bowen of Whiteville, N.C. If Franklin finishes eighth or better in the finale, he'll lock up the championship.

Franklin wasn't in the best of spirits following the Oct. 9 event. For one, rough track conditions that plagued every driver did a number on his car, breaking the oil pump off the back of the engine.

"It was like running through a field out there," said Franklin, who finished 18th, 13 positions behind Bowen. "There’s no telling what else it broke; we just ain’t found it."

And Franklin wasn't happy about the additional series race. He'd planned to spend the mid-November weekend at East Alabama Motor Speedway's $30,000-to-win National 100, where he finished second in 2007 and third in '08.

"Any other time we’d done been through racing," Franklin said. "I done had my schedule planned out to go down to Alabama that weekend and now we’ve got to come back here. I don’t know what to say about this series. This used to be a good series and I don’t know if it’s just because (Lee) ain’t had no races scheduled, but we try to make our schedule out at the beginning of the year of where we go racing. ...

"But when you race for points, I guess you’ve got to come back." — Thomas Pope

CHATHAM, LA., TRACK PUTS UP $5,000: Jones Motor Speedway in Chatham, La., a popular Late Model track that was formerly Fastrax Speedway (and before that Super Bee Speedway), is running its inaugural Deuces Wild Classic on Oct. 14-16. The event is highlighted by $5,000-to-win features for Late Models and modifieds with a total purse of more than $40,000. Practice is set for Thursday with prelims on Friday and the 50-lap feature events Saturday. Legends, cruisers and street stocks are also on the car. The Late Model feature pays $4,000 for second, $3,000 for third, $2,000 for fourth and $1,000 for fifth. For more information, see jonesmotorspeedway.com. — From track reports

WINCHESTER HONORING LATE CAR OWNER: Raye Vest, a long-time Late Model team owner from White Plains, Md., who died a year ago, will be honored Oct. 22-23 at Winchester (Va.) Speedway the first running of the Raye Vest 50. The 50-lap feature for Super Late Models will pay $10,000 to the winner. Along with heat races and time trials on opening night, the top 24 qualifiers will run a 24-lap, $2,400-to-win semifeature. The next night's action includes a pair of $2,400-to-win qualifying races along with the main event. Four other divisions, including Limited Late Models, will also be in action. See winchestervaspeedway.com for more information. Vest was the popular car owner of Rick Eckert, who drove Vest's No. 24 starting in the late 1990s. — From track reports

COORS LIGHT FALL CLASSIC COMING UP AT WHYNOT: The 16th annual Coors Light Fall Classic, one of Mississippi's major late-season specials, is coming up Oct. 21-23 at Whynot Motorsports Park near Meridian. A $15,000-to-win feature included an impressive list of winners including Wendell Wallace, Chris Wall, Brian Birkhofer and Ronny Lee Hollingsworth, last year's winner. Practice is set for Thursday, Oct. 21, with prelims set for Friday, Oct. 22, and the main event scheduled for Saturday, Oct. 23. Among other divisions in action at the Rodney Wing-promoted track are Crate Late Models, which will compete in a $2,000-to-win feature at the third-mile oval. For more info, see whynotmotorsportspark.com. — Ben Shelton

ODDS AND ENDS: Kokomo (Ind.) Speedway includes Late Models as part of its eighth-division Kokomo Clash. The $2,010-to-win Late Model feature is among highlights of Oct. 15-16 action. ... Tampa (Fla.) Days Inn North is offering $45 per night room rates for East Bay Raceway Park's Winternationals Feb. 7-12. Internet audiocasts and driver interviews are planned on site. ... Magnolia State 100 officials announced that lab tests confirmed that tires from disqualified drivers Jonathan Davenport and Ronny Lee Hollingsworth were altered by chemicals. The drivers were ousted from the Sept. 24-25 event at Columbus (Miss.) Speedway after a device detected illegal chemicals. ... The Southern All Star Racing Series has moved its Oct. 30 event to Cochran (Ga.) Motor Speedway. ... Ohio's Eldora Speedway has set dates for its biggest Late Model events in 2011. The $100,000-to-win Dream XVII is set for June 10-11 and the 41st annual World 100 is scheduled for Sept. 9-10.