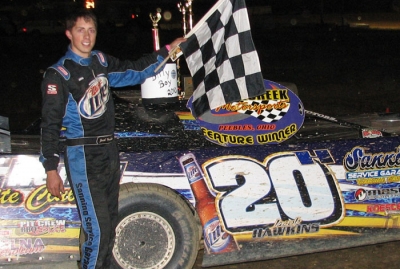 Editor's note: Attempts to compete the remainder of the weekend were rained out; the twin $7,500-to-win feature were rescheduled for Oct. 9.

PEEBLES, Ohio (Oct. 1) — Jacob Hawkins of Fairmont, W.Va., led all the way Friday night at Brushcreek Motorsports Complex for a $1,500 victory in a tuneup for the track's lucrative Billy Bob double features.

Hawkins held off eighth-starting Chub Frank of Bear Lake, Pa., for the caution-free victory while Eddie Carrier Jr. of Salt Rock, W.Va., came from his ninth starting spot to finish third. Polesitter Rick Combs of Cincinnati, Ohio, was fourth and Steve Casebolt of Richmond, Ind., rounded out the top five.

Sixth-starting Austin Dillon of Welcome, N.C., got alongside Hawkins early in the race, but the second-running Dillon briefly lost control of his car on the 17th lap and lost five positions. He ended up seventh.