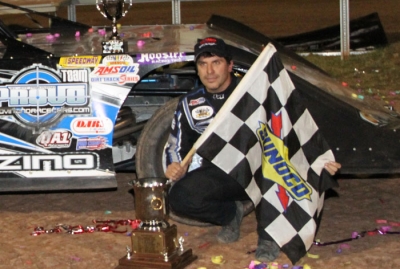 The polesitting Provinzino, who also won the event in '05 and '09, earned $3,300 including $800 in lap money in outdueling fellow front-row starter Darin Meierotto of Superior, Wis., Marshall Fegers of Mound, Minn., continued his streak of solid late-season runs with a third-place finish followed by his older brother Justin Fegers of Minnetonka, Minn. Travis Budisalovich of Cottage Grove, Minn., rounded out the top five in the 38th annual race that was postponed by poor weather Sept. 2. | Slideshow

Provinzino joins Jeff Hinkemeyer, Rick Aukland and John Kaanta was back-to-back winners of the event while joining Aukland and Leon Plank as the race's only three-time winners.

Provinzino and Meierotto battled side-by-side at the outset of the 40-lap feature with Justin Fegers trailing with Ashley Anderson and Budisalovich.

A lap-three yellow slowed the action when Kevin Carlson and Dave Esse tangled in turn two, and Provinzino got the jump on the restart and stretched his margin on Meierotto and the rest of the field.

The 11th-starting Marshall Fegers moved into the top five in the race's middle stages and tried with Meierotto to chase down Provinzino, who faced a big pack of traffic in the race's late stages.

But a lap-37 caution for Tommy Waseleski Jr.'s spinning car in turn one gave Provinzino clear racetrack the rest of the way.