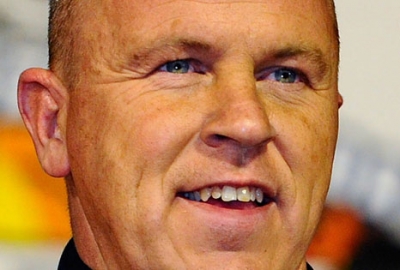 The dramatic battle for the 2010 World of Outlaws Late Model Series points title heads into its homestretch this week, visiting Mohawk International Raceway in Akwesasne, N.Y., on Wednesday night and Tri-City Speedway in Franklin, Pa., on Saturday and Sunday for three events that will loom large in determining the driver who cashes the $100,000 champion’s check at season’s end.

The points race is shaping up as one of the closest in history, a showdown among three drivers aiming to become the first driver to win a second title since the national tour was reincarnated in 2004 under the World Racing Group banner.

“It looks like the points are gonna go right down to the last night (the World Finals on Nov. 4-6 at The Dirt Track at Charlotte) again this year,” said Richards, the 22-year-old sensation who won last year’s championship by 14 points over Steve Francis of Ashland, Ky. “We’d much rather have a big, comfortable lead and just race the rest of the year not having to think about points, but this is what we’re facing. It’s gonna be nerve-racking for all of us, but it’ll be exciting for the fans.”

Lanigan, 40, is carrying the most momentum into this week’s critical swing, which includes the last extra-distance, $20,000-to-win event of 2010 and a pair of 50-lappers that make up Tri-City’s sixth annual Oil Region Labor Day Classic. He just grabbed the points lead for the first time this season in the tour’s last stop, using a fourth-place finish on Aug. 24 at Brewerton (N.Y.) Speedway to overtake Richards, who placed 11th after struggling with an incorrect tire-compound choice.

The change at the top of the WoO standings came after an epic month-and-a-half-long run by Lanigan, who was on the verge of falling out of the title conversation when he found himself saddled with a 78-point deficit to Richards following the July 3 event at Tazewell (Tenn.) Speedway. Lanigan responded with an amazing comeback, accumulating five wins, four seconds, two thirds and a fourth-place finish over the next 14 races to hop past both McCreadie and Richards.

But even with his confidence soaring, the preternaturally low-key Lanigan refuses to discuss the WoO points race in any detail. He’s just trying to go with the flow.

“We’re just gonna keep trying to win races,” said Lanigan, who has captured five of the last 10 events to run his 2010 checkered flag total to a single-season career-high total of six, tying him with Richards as this year’s winningest driver. “We’re thinking about the points, but we don’t want to worry about them. We’ve got our car working real good right now and we just want to keep rolling.”

Richards, of course, hasn’t blown the points lead; Lanigan has simply snatched it with an impeccable stretch of success. While Richards has won only once in the last 18 races after emerging victorious five times in the season’s first 20 races, he’s regularly finished among the top five during Lanigan’s hot streak.

“We’ve been running good, but Darrell’s been running better,” said Richards, who had led the points standings for 25 consecutive races before being supplanted by Lanigan. “We’re aggravated that we lost the lead, but at least we still have a shot. There’s time left. We just have to work harder and get our car better.”

There’s no panic in the cool, calm Richards. He’s been in this situation before — almost exactly one year ago, in fact, when a subpar outing in the finale of Tri-City’s Oil Region Labor Day Classic cost him the points lead to Francis. The youngster proved his mettle by rallying to beat Francis for the title in the season-ending World Finals.

“After last year, we know it’s not over because we lost the lead,” said Richards, who has held at least a share of the points lead after 31 of this season’s 38 events. “Hey, Darrell may just run away with it the way he’s been running, but we’re not gonna give up. All of us have had our runs this year — Darrell, McCreadie, us. Hopefully we can get on another one to end the year strong.”

It’s been nearly two months since the 36-year-old McCreadie held hottest-driver status on the WoO, so he needs to heat up — quickly — if he’s going to claim the championship in his first season as a tour regular since he captured the crown in 2006. Since capping a stretch of three wins in five starts with a Gopher 50 triumph on July 7 at Minnesota’s Deer Creek Speedway that pulled him within 16 points of Richards in the standings, McCreadie has gone winless and slipped 46 points behind.

McCreadie was especially frustrated at the end of last week’s WoO Northeast swing, which was dotted with tracks where he ran well during his DIRTcar big-block and 358 modified days. He registered a third-place finish on Aug. 23 at Quebec’s Autodrome Drummond but struggled in two other events, leaving him treading water rather than closing the gap in the points chase.

“We’re just not running good enough; we haven’t in a while,” said McCreadie, who owns four victories in 2010 and has held at least a share of the points lead after five events (he was tied twice with Richards). “Somehow we’re still not out of it (the points battle), but we have to get better.”

McCreadie should be in position to make some headway Wednesday at Mohawk. A second-place finish in a heat race on Aug. 20 will let him draw for a starting spot in the first three rows of the richest dirt Late Model event ever run in the state of New York. Lanigan will also draw for a top-spot starting slot (he won a heat on qualifying night), while Richards is already set to start 10th after finishing fourth in a prelim on Aug. 20.

As for the half-mile Tri-City Speedway, all three championship contenders will be shooting for their first career WoO victory in one of the $10,000-to-win 50-lappers. Lanigan has come closest to paydirt at Tri-City, leading the second feature in 2006 until tangling with a lapped car on the final lap and tumbling to an eighth-place finish; he also scored a runner-up finish in last year’s finale.

Richards, meanwhile, has personal-best Tri-City finishes of second (2006 and 2009), while McCreadie has finished as high as fourth (2008) and never worse than eighth in seven career WoO starts at the track.