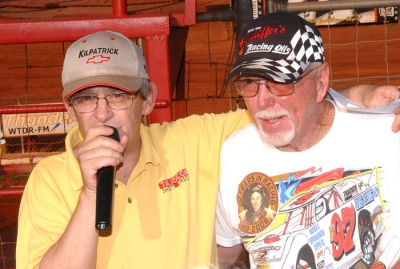 Perry Holman of Rainbow City, Ala., one of the best-known and beloved dirt-track racing announcers in the South who had a smile and kind word for every race fan, died Tuesday morning at a Birmingham, Ala., hospital. He was 61.

Holman, who had struggled with liver disease in recent years, underwent surgery last week to remove his spleen and was recovering at the University of Alabama-Birmingham Medical Center. His death was reported by Dennis Anton, the general manager at Talladega (Ala.) Short Track, one of several tracks where Holman announced. | DirtonDirt.com blogger remembers Holman

Holman's voice is familiar to fans at Talladega and Green Valley Speedway in Glencoe, Ala., where he regularly called races including Dirt Late Model specials like TST's Ice Bowl and Green Valley's Bama Bash. He also made frequent guest appearances announcing at Rome (Ga.) Speedway, Columbus (Miss.) Speedway, Cleveland (Tenn.) Speedway, North Alabama Speedway in Tuscumbia, Ala., and several others.

Holman "always had words of wisdom, a kind smile, pleasant attitude and most of all was a loyal friend to all whom he befriended," Green Valley owner Dennis Harker wrote on the track's website Tuesday. "Racing at Green Valley will never be the same for me or my family ever again without Perry being here."

Survivors include his wife, Gina; a daughter, Jinell Brittain; a son, Brayden Holman; and four grandchildren.

FAST TIME AWARDS POSTED FOR WORLD 100: The fastest qualifier at the Sept. 10-11 World 100 will receive $500 from appliancezone.com plus a drum fuel from Sunoco, the track announced. The second quickest driver in qualifying will also receive a drum of Sunoco Race Fuel. The top two qualifiers, who are also guaranteed spots in the starting field for the 40th annual event, will be introduced to the crowd along with representatives from appliancezone.com and Sunoco during Saturday’s pre-race ceremonies. The winner of Dirt Late Model racing's most prestigious event wins $43,000. — From track reports

THREE IN A ROW FOR DART CORN BELT CLASH: The second-year Dart Corn Belt Clash will run three nights in a row Aug. 25-27 for the first time in series history this week with events Wednesday, Thursday and Friday. Action starts at Cedar County Speedway in Tipton, Iowa, before heading to Highway 3 Raceway in Allison, Iowa. The series heads north to conclude the three-race stretch at Chateau Speedway in Lansing, Minn., which hosts its first Late Model event in more than 20 years. Chad Simpson of Mount Vernon, Iowa, leads the series points. — From series reports

SERIES SCHEDULE CHANGES: The Pepsi Nationals at I-55 Raceway in Pevely, Mo., has been shortened from a two-day, $20,000-to-win event to a single-day $10,000-to-win event on Sept. 18. The race is sanctioned by the World of Outlaws Late Model Series. ... Lucas Oil MLRA has added Oct. 22-23 events at Mid-America Speedway in South Coffeyville, Okla. ... The Volunteer Racing Series will co-sanctioned Sept. 17-18 action at Lake Cumberland Speedway in Burnside, Ky., events already sanctioned by the National All Star Racing Association. The weekend features $2,000- and $3,000-to-win events for Late Models. ... O'Reilly SUPR has added an Oct. 30 event paying $2,500 to the winner at Jones Motor Speedway in Chatham, La. (formerly Fast Trax Speedway).

ODDS AND ENDS: To make up weather-related cancellations, Quincy (Ill.) Raceway plans to extend its weekly racing season to mid-October. ... Elkins (W.Va.) Speedway will close the season Aug. 27 with season championships for all divisions. ... Tri-City Speedway in Granite City, Ill., has added the $7,000-to-win Dodge Ram 50 to its schedule on Sept. 17, a non-touring UMP points event.